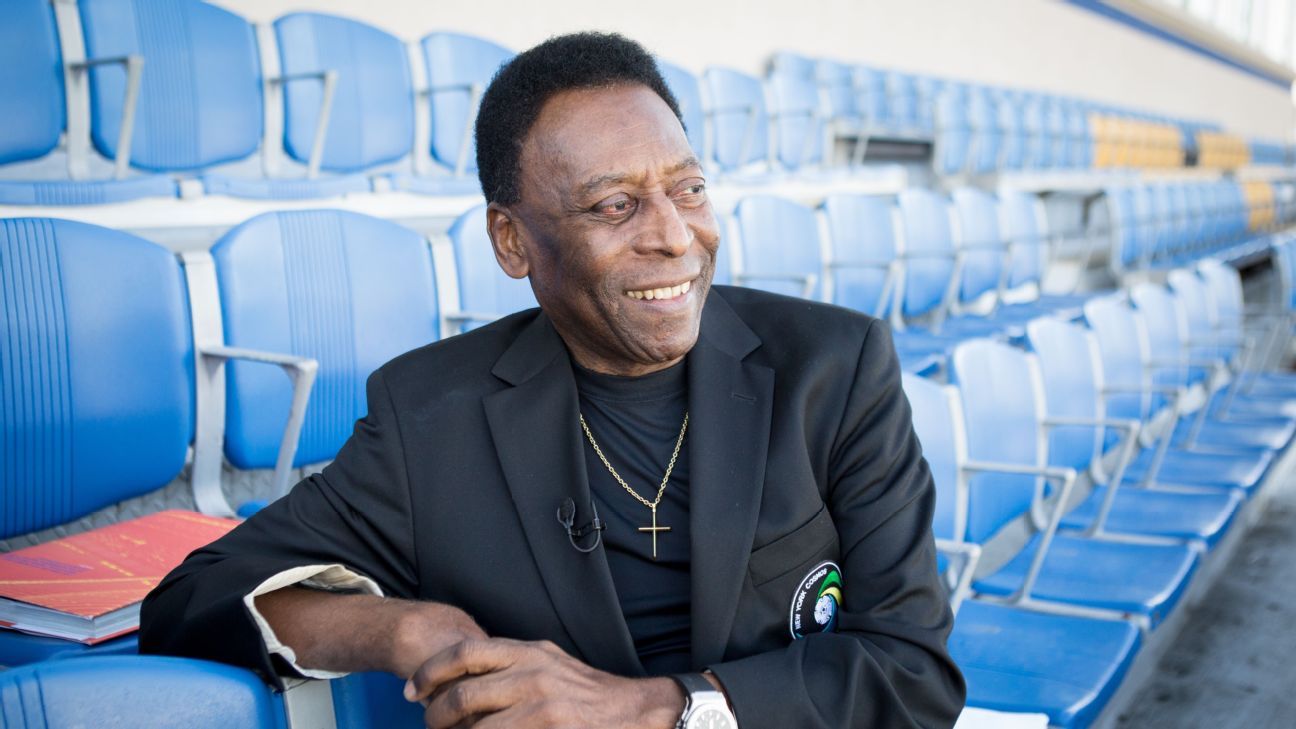 Pele. Four letters, two syllables. And a universal code word. A concept understood by everyone, regardless of proximity — or distance — from the beautiful game.

Pele — the word — meant something not just to fans, but also to folks who had never watched a football game, as well as to those who had but hated the sport. In that sense, he was David Beckham before David Beckham. Michael Jordan before Michael Jordan. He was the game’s first globalized superstar by whatever metric you choose: commercial, media presence, wages. Oh, and he won three World Cups as well, which didn’t hurt.

He was the reference point for the entire world and for its biggest sport. He at once defined the sport and transcended it. He meant something to the obsessives who travelled hundreds of miles to see him train — let alone play — with Santos or the Brazil national team, and he meant something to those who have only a vague awareness of the sport.

Consider the number of footballers who were often compared to him. Spend a little time on Google and you’ll be floored. From Zico, the original, to Rodney Marsh. From Wayne Rooney to Eduard Streltsov to Johan Cruyff. It wasn’t about how you looked or how you played, either; it was about how great you could be. That’s what Pele was — the ultimate benchmark.

– Farewell to the King: Reacting to the death of Pele
– The legendary life of Pele in photos

It’s no coincidence that Pele the media phenomenon coincided with a great shrinking of the world, brought about by developments in communication. Television made inroads everywhere over the course of his career, which started with Santos in Brazil in 1956 and ended with the New York Cosmos in the US in 1977. In between, he won the World Cup with Brazil in 1958, 1962 and 1970.

With the burgeoning TV age, in some places that meant having a TV in the kitchen and the bedroom as well as in the living room. Elsewhere, it meant finally having one in your home, your neighborhood or your village. And when it came to football, more often than not, Pele was the unifying thread. Some saw him more, some less. But everyone saw him at some point, because World Cups — and the legends they created — were magnified and amplified by television.

When he performed, it was an event, and you had to catch him live: There was no highlight package appearing on your phone, no SportsCenter at 11. And yet he still managed to go viral not via 40-second clips, but via word of mouth. Today’s global stars appear on our screens through streaming and social media, GIFs and commercials, memes and banners. Pele had one way in — network television — and the bar for access was far higher than it is today.

He emerged in black and white and finished up, two decades later, in technicolor. It wasn’t just what he did on the pitch, either. The smile was infectious, the knowing glint in the eye was irresistible. Pele embraced that role and made the transition from superstar to ambassador/institution early. He “got it,” possibly before everybody else.

Three decades before Beckham, Pele landed in the United States tasked with making soccer, the sport of the future, into the mainstream sport of the present. Like Beckham, if the goal was to transform one kind of football into something as dominant as the other kind of football, he came up short. But like Beckham, if the goal was to raise awareness and plant a seed that might be harvested many years later, he succeeded.

The Brazilian government declared Pele a “national treasure,” effectively making it impossible for a European club to attempt to sign him. He was 21 at the time, which is extraordinary when you think about it, and it marked his career on two levels.

First, it meant most of the world would only see him sporadically: World Cups, glamour friendlies, both with the Selecao and with Santos, and the Intercontinental Cup, when Santos won the Copa Libertadores. And on that stage, he almost always delivered. In between those glimpses, the world beyond Brazil sustained itself with the echo of those performances.

The legend was self-fueling and self-perpetuating. How could it not be? The goal against Sweden in the 1958 World Cup final, when he chested the ball, spun round, flicked it over a defender’s head and rammed it home? The 1962 strike against Mexico, when he picked up the ball in his own half, accelerated into space, beating one defender after another (six in total) and then bulleted the ball into the corner? And of course, the headed goal in the 1970 World Cup final against Italy, when he beat Tarcisio Burgnich with a mighty leap?

“The cross came in and we both leapt as high as we could,” the late Burgnich told me years after. “Then I came down to Earth where I belong. And he stayed up there, where he belongs, and scored.”

Those are just the goals. Pele was iconic, even when he missed, like the incredible feint that befuddled Uruguay‘s Ladislao Mazurkiewicz in 1970, when he intentionally ran past the ball, freezing the keeper in place.

These moments are seared in collective memory because they occurred on the biggest stage, of course, but also because for most of the world, those Pele sightings were rare. His week-in, week-out performances with Santos did not garner the global visibility he would have had for a top European side like Real Madrid, who tried to sign him on numerous occasions. While the Brazilian league was one of the best in the world at the time, it simply didn’t receive the same worldwide attention.

And second, it planted an early — way early — awareness that Pele was more than an outrageously gifted footballer. He was a man who stood for something. Actually, many things. The media machine imbued him with power; he embraced it and he chose to use it, where possible, as a force for good.

That “national treasure” tag did have a dark side too. He knew it also made him a tool of the military dictatorship that ruled Brazil for two decades, starting in 1964. Critics said it enabled the regime to parade a smiling Pele around as a sign that all was well, particularly on matters such as race and inequality. If an Afro-Brazilian, born dirt-poor in a favela, could be successful, wealthy and popular — and loved by the regime — surely there was nothing wrong?

Pele remained apolitical, at least in public, for most of his life, saying he “did not understand politics” and was unaware of the brutal excesses of the military regime, particularly in the late 1960s and early 1970s. Some draw parallels with one of his contemporaries, Muhammad Ali, who took a decidedly political stand against the Vietnam War, refusing the draft and, as a result, being blackballed from boxing for three and a half years. Such comparisons appear unfair. Ali paid a heavy price, but he spoke out in a democracy that guaranteed free speech. This was not the case for Pele’s Brazil at the time.

That said, when the Brazilian government tried to pressure him into coming out of retirement in 1973 ahead of the 1974 World Cup — he had left the national team to concentrate on club football in 1971 at 30 years of age — he turned them down. By that point, Pele would reveal later, he had become aware of the torture and repression employed by Brazil’s authoritarian president, Emilio Garrastazu Medici.

“The military tried to force me,” he said in a 1999 interview. “I was pressured with tax questions, but I decided to stick to my position.”

Brazil lost to the Dutch in the semifinals of that World Cup. Still 33, and coming off a season that saw him finish as top scorer in the Brazilian league, it may well have been a different story for Brazil in 1974. He might have won a fourth World Cup and competed in his sixth, both of which would have been records. But he was no longer going to let himself be used as a symbol of something he despised.

Pele’s status and charisma made him just as valuable to advertisers and marketers, too. He was the first great global communicator of his sport. Corporations understood this, which is why you’ve seen him in ads for nearly every brand under the sun: from Pepsi to Louis Vuitton, from Subway to Ray-O-Vac, from Puma to Head and Shoulders, from Viagra to FIFA 14.

ESPN’s Fernando Palomo discusses the legacy Pele leaves behind as both a soccer player and a global ambassador.

But Pele also gave back, serving more than two decades as a United Nations ambassador, fronting for countless charities and organizations championing social change. When he spoke, he often sounded like a politician, but the kind you like, the kind who says the right things to the right crowd on the stump.

He continued like this until his final days, hop-scotching across the globe, spreading whatever message he felt he had to spread — sometimes for money, sometimes for values he believed in, but most of all representing himself, Pele, and the world’s idea of him and who he was. And that, make no mistake about it, was a huge responsibility.

And a lot to live up to.

On the pitch, the fact that it took 20 years for someone else — Diego Maradona — to emerge who could legitimately start a “greatest of all time” debate says it all. And it would take another 25 years after that for other candidates — Lionel Messi and Cristiano Ronaldo — to join the conversation.

That’s Pele’s legacy. His records may fall, as just about all records eventually give way to the march of time. But Pele’s GOAT status at a time when the game was booming and the football world was shrinking will remain in perpetuity. So, too, will his life after retirement, when he embraced the iconic ambassador status that had been thrust upon him and used it as a force for good, working until his dying day.

That’s why those two syllables retain their power. They are the universal keys that can open the lock to almost any football fan’s heart.

Microsoft’s forecast suggests gloomy tech environment will continue
Child prodigy may make Grammy history
‘Latex-laden and ludicrous’: Tom Hanks gets three Razzie nods as Blonde leads the field
British teenage extremist whose videos were linked to two mass murders in US jailed
Politicians are not offering a comprehensive solution on how to fix the NHS