A suspected Russian torture chamber – dubbed a “mini Auschwitz” – has been discovered in a newly-liberated town, Ukrainian officials have claimed.

The room, which contained a box of gold dental crowns, was found inside a de-occupied town near Izyum, a city in the eastern Kharkiv region of Ukraine.

Having been occupied by Russian forces since April, Pisky-Radkivski was freed by Ukrainian troops last week.

As they moved through the region, local officials and National Police said they made the grim discovery in the Borova district, alongside several other horrendous items.

A gas mask with a dirty cloth attached to it was found, Kharkiv’s chief police investigator said, with Ukraine’s defence ministry claiming it had been forced onto “the head of a victim, who was covered with a smouldering rag and buried alive”.

The box of gold dental crowns that was found prompted the ministry to draw parallels between Russian and Nazi forces, describing the room as a “mini Auschwitz”.

The Nazi concentration camp, where an estimated 1.1 million people were killed, saw more than 40kg of gold and white metal from false teeth removed from the bodies of victims murdered in gas chambers, according to the Auschwitz Memorial.

Photos released by the head of Kharkiv’s National Security Service’s investigative department, Serhii Bolvinov, also showed a smashed phone, pieces of what appeared to be barbed wire, and a sex toy.

“Neighbours constantly heard screams from there. Investigators found a terrible torture chamber in the village,” he said.

He confirmed that police “know the names of the victims” and an investigation is now underway.

‘People were intimidated, beaten and abused’

The country’s National Police Force has accused Russian troops of committing war crimes during their occupation of the area.

“When Russian servicemen entered the village, they drove the locals out of their homes and settled there themselves,” it said.

“People were intimidated, beaten and abused. The Russian occupiers left looted houses. Dirt and filth – the trademark of the ‘Russian world’,” it added.

This is not the first time Russian forces have been accused of committing war crimes during the war in Ukraine, with tens of thousands of alleged incidents currently being investigated by police.

The United Nations human rights office has said Russia’s invasion has caused a dire human rights situation in the country, and a wide range of violations, including extrajudicial killings and torture, that could amount to war crimes have been committed.

A war crime is defined by the United Nations as a serious breach of international humanitarian law committed against civilians or “enemy combatants” during an armed conflict. 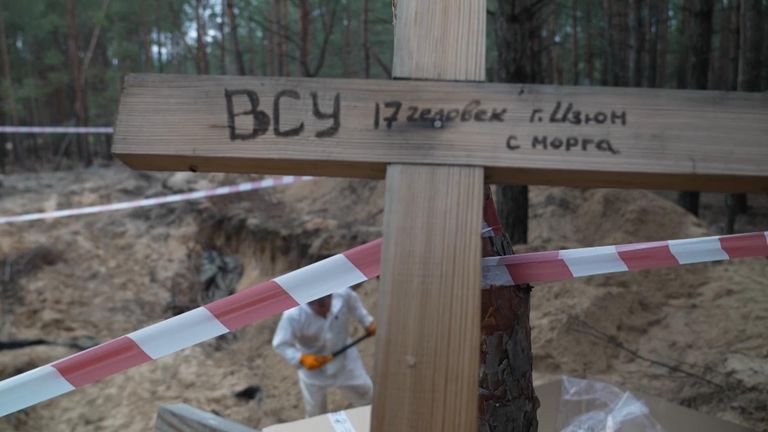 
Russia has already been accused of war crimes in Izyum, following the discovery of more than 440 graves in the town earlier in the conflict.

Mr Bolvinov claimed that some of the victims were “shot dead”, with others died as a result of artillery fire, mine explosions, and airstrikes.

Bodies found with their hands tied behind their backs

One of the most notable alleged war crime incidents to have taken place in Ukraine was in the town of Bucha, where dead bodies were found with their hands tied behind their backs.

Just outside the Ukrainian capital of Kyiv, the area was devastated by fighting, and after Russian troops began to withdraw, images revealed a 45ft-long makeshift mass grave outside a church. 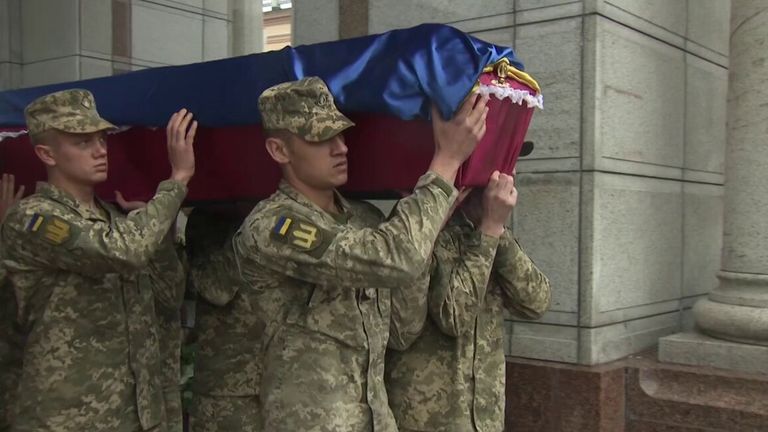 Bodies still being found in Bucha

Sky News verified two videos showing bodies laying in the street, including one with at least seven corpses on the pavement.

Photos taken by Associated Press showed bodies of people dressed in civilian clothes with their hands tied behind their backs and wounds to the back of their heads, with a suggestion that some were shot at close range.

The images prompted condemnation and offers of more support to Ukraine from across the world, including the UK and the United States.