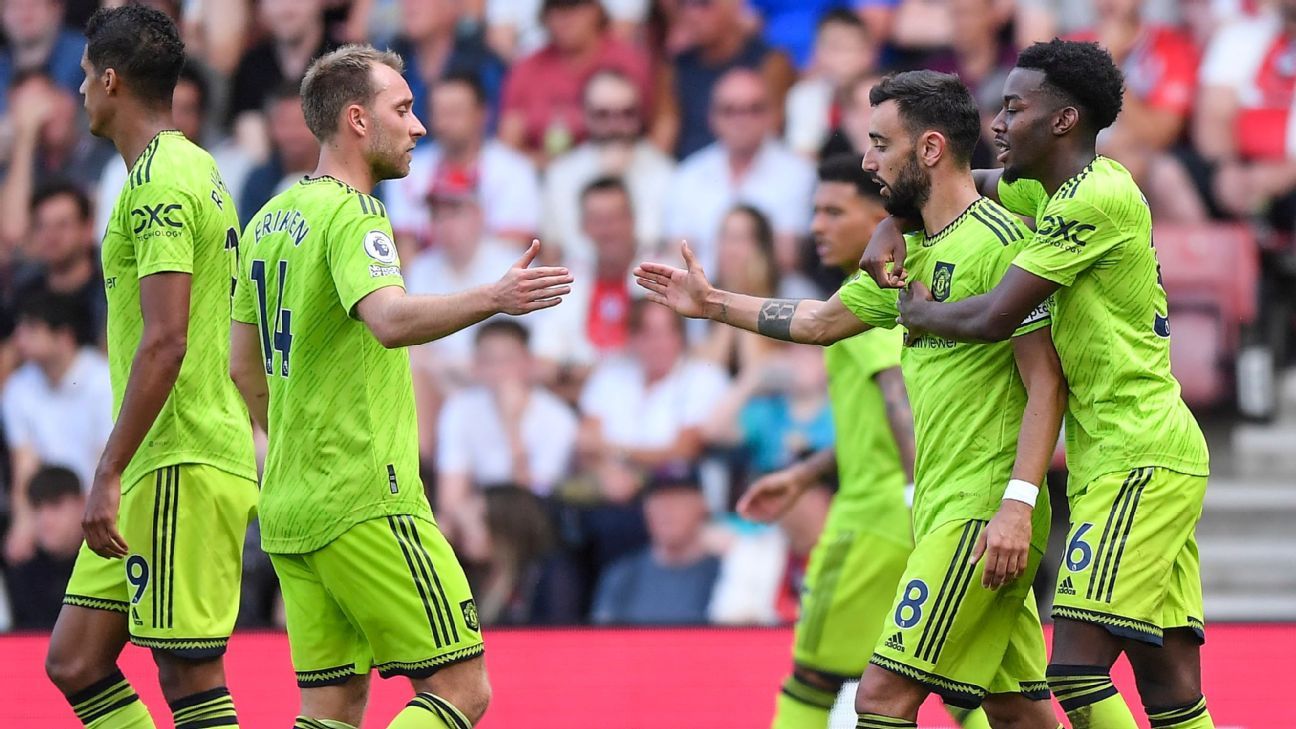 SOUTHAMPTON, England — Bruno Fernandes proved to be Manchester United‘s match winner, scoring the only goal of the game in the victory against Southampton on Saturday. A clean sheet and an away win was another landmark moment as new coach Erik ten Hag attempts to get United playing in his own style.

Here is our reaction to Saturday’s Premier League clash on the south coast.

After beating Liverpool 2-1 at Old Trafford on Monday night, the question here was always this: could Manchester United back it up?

United did not reach the same level of intensity and quality as five days earlier but Fernandes’ 55th-minute goal was enough to beat Southampton 1-0 and give them back-to-back victories for the first time since February (188 days.)

Although goalkeeper David de Gea was forced into one superb second-half save to deny Joe Aribo, United were relatively comfortable — if largely unimpressive — as the home side tried in vain to push for an equaliser. Southampton had lost six of their last eight home games in all competitions and they looked short of potency in attack, but this was as much a test of application and attitude for United as anything, and on that score, they met the challenge. These remain formative days in the Ten Hag era, but another victory will give him more momentum to build on with Leicester City up next on Thursday.

United had lost their past seven matches away from home in the Premier League, the latest ranking as arguably the nadir of a miserable spell — a 4-0 thrashing at Brentford. Saturday’s win was not emphatic, but United looked more organised and compact than they have done in many matches during that run, keeping a clean sheet on the road for the first time in any competition since December 2021 (against Norwich).

This was a different task to facing Liverpool, given United had more of the ball (51% against Southampton compared with 30% vs. Liverpool), and while they were not as fluent as Ten Hag would have liked, his team did not look anywhere near as vulnerable when moves broke down. The arrival of Casemiro should help that further in future — the Brazilian player appeared for the final 10 minutes to make his debut, helping United defend one threatening moment as they edged towards the finishing line.

“You’ve only come to see Ronaldo,” sang the away fans shortly after he made his 68th-minute introduction as a substitute. Doubts remain over whether this might be the last chance anyone gets to see Cristiano Ronaldo in a United shirt after the 37-year-old was once again left out of Ten Hag’s starting lineup.

Speculation continued this week that Ronaldo’s agent, Jorge Mendes, is seeking a suitable club who can offer the forward Champions League football, with Napoli the latest club to hold talks. Ten Hag has, however, made positive noises about planning for the season with Ronaldo in the ranks, so an uncertain end to the window awaits.

At least Ronaldo got on the pitch. Harry Maguire watched the entirety of this game from the bench as Raphael Varane and Lisandro Martinez showed more encouraging signs of forging an effective centre-back partnership together. With Chelsea closing in on the big-money signing of Wesley Fofana, could Leicester offer Maguire an escape route back to his former club? Would he even want to jump ship?

Janusz Michallik debates the future of Cristiano Ronaldo after the forward was used as a substitute vs. Southampton.

Christian Eriksen occupied a deeper midfield role once again and continued to give United a range of inventive passing they have lacked with the Scott McTominay–Fred axis.

Marcus Rashford struggled to build on the promise of his performance against Liverpool. Ended with just 28 touches — the fewest of any player to last 90 minutes — and one shot.

After the match: What the managers, players said

“It has to be the standard for Manchester United,” boss Erik ten Hag said after the game. “It has to be normal, but also you celebrate every win because you have to fight for it. We learnt from our lesson in Brentford.

“There is room for improvement, but there was also some really good football. The last half an hour was a survival, and there I think we can do better. There was not always pressure on the ball, but [the defenders] stayed compact and were straight in the duels. I was comfortable they would deal with it.

“The finish [from Bruno Fernandes] was magnificent, but the part before, it was a team goal. We built it up from the back, and there were some more moments straight after half-time where it was well played from the team. We have to improve in possession.”

Since Bruno Fernandes made his Premier League debut in February 2020, he has scored 37 goals. In that time, only Mohamed Salah (54), Harry Kane (49) and Son Heung-Min (45) have scored more.

Southampton: The Saints face Chelsea on Tuesday before making the trip to Wolves on Saturday, Sept. 3.

Quick Charge Podcast: October 1, 2022
Cosmicflows-4: Astronomers Assemble Largest Catalogue of 56,000 Galaxy Distances
Here’s how the UK power sector could ditch 99% of natural gas by 2030
Hertling predicts ‘disastrous’ results after Putin’s move
Hurricane Ian has killed at least 17 people in the US – and officials are warning number of deaths will rise