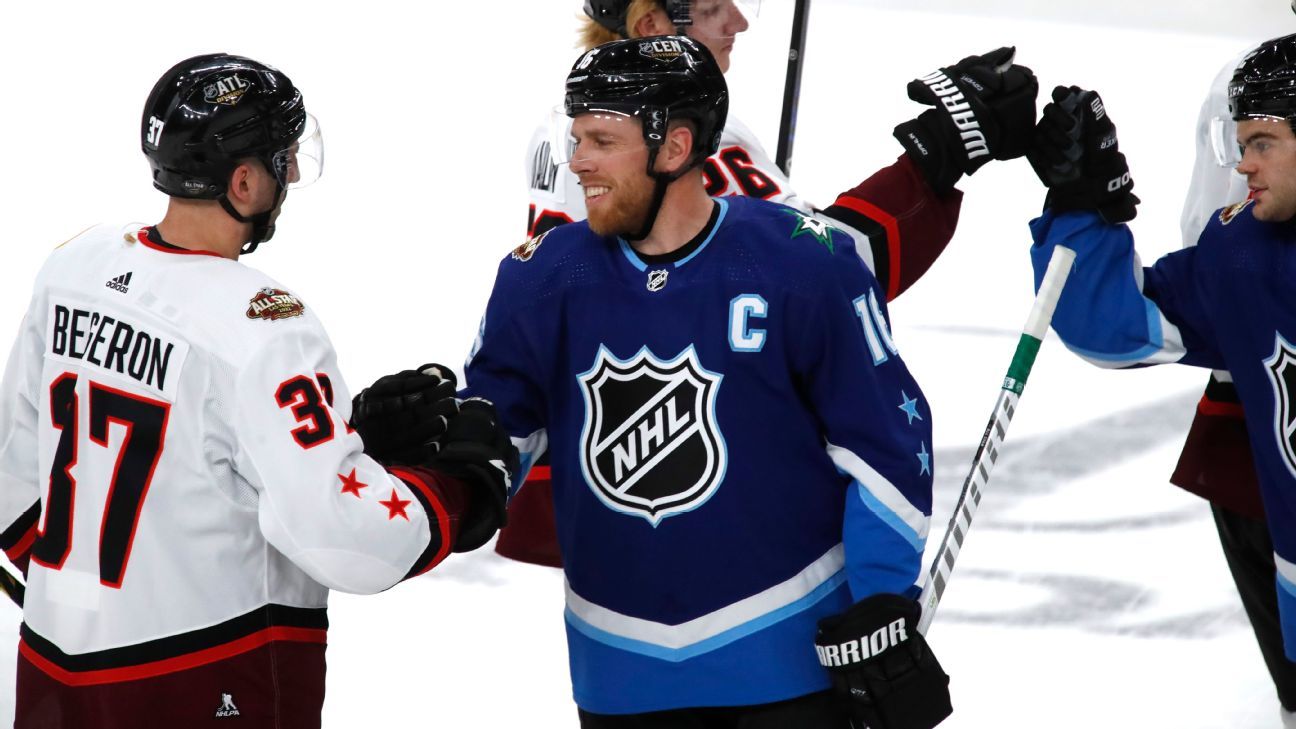 The NHL’s journey with the city of Las Vegas has been a fascinating one. In a span of five years, we’ve gone from the league discouraging its new expansion team from adopting a name associated with gambling to having NHL players shooting pucks at playing cards on The Strip in a blackjack-inspired All-Star Skills Competition.

It’s been quite the journey!

I attended the “NHL 21 in 22” event on Thursday night, one of two outdoor skills competitions that the NHL held in Vegas. The other was an accuracy competition in the Bellagio fountains, as players shot pucks onto different platforms that mimicked a rink as the water crashed around them.

That was on Thursday night. Please recall that the NHL All-Star Skills Competition was held at T-Mobile Arena on Friday night. For the first time ever, the NHL pre-taped two events the night before the live show, airing them in between events at T-Mobile Arena while the ice was being resurfaced.

The NHL kept its secret well. Fans who gathered on the sidewalks to watch the players on Thursday either thought they were rehearsals or were unaware of the winners: Dallas Stars forward Joe Pavelski in the “blackjack” shootout and Columbus Blue Jackets defenseman Zach Werenski in the “Fountain Faceoff.”

In fact, the league kept that secret so well that some sportsbooks didn’t know the events were pre-taped. They allowed wagering on them on Friday, right up until a few hours before the arena competition started.

And then the bets were cancelled, with little indication to the wagerers as to why.

Bodog Canada and Sports Interaction, another Canadian sportsbook, were among the sites that offered wagering on the outdoor events. Bodog had Pavelski at +475 to win the “21 in 22” event. Sports Interaction had Pavelski at +274 but had Werenski at +551 to win the fountain event, tied with former U.S. women’s national team star Jocelyn Lamoureux-Davidson for the longest odds.

As of Friday afternoon, those books were still taking action on the pre-taped events, all the way up to 4 p.m. ET for the 7:30 p.m. ET skills competition. However, about two hours before the show, wagerers started getting error messages that their bets were “late or past post wager” and their money was refunded.

The results had been kept off of social media, but enough people had witnessed the events that the winners might have leaked to some bettors. Lee Hamilton of Calgary wasn’t privy to that info. “I had no idea it was taped and what the results were,” said Hamilton, who took a $1 flier on Pavelski on Bodog at +475. “I was disappointed,” he told ESPN. “It felt unfair to the bettors.”

I reached out to Bodog Canada about the refunded wagers.

“We can confirm that these bets were voided due to it being a pre-recorded event. Once information which would decide the result of a wager is released or becomes public knowledge prior to a wager being placed, such wagers would be voided, in guidance with standard industry practice,” it said in a statement.

Sports Interaction also confirmed it cancelled the wagers when it discovered the event had been pre-taped.

While this was a “unique, one-off sort of thing,” Sports Interaction said it does have a policy for this kind of anomaly. “Bets may be placed on any event up to its official start time. Bets inadvertently accepted after betting has closed, where the event has started, where the outcome of the event has been resolved, or at a stage where the customer could have any indication of the outcome, may be voided at the discretion of Sports Interaction.”

“We wanted to make sure that wagering on the contests were deemed OK by the NHL since we are an official sports betting partner. We didn’t hear back until Friday afternoon that the league said ‘OK,’ so we had little time to get the four contests up anywhere,” said Adam Pullen, assistant director of trading at Caesars Sportsbook. “We could only offer them in the state of Nevada. They did generate a small handle. Not bad for short notice.”

Pullen said that Caesars does book plenty of events that aren’t on live TV. “We do try to get the most accurate starting times possible on every event we book. It has happened in the past, very rarely, that something has been over, unbeknownst to us, and we still were taking bets,” said Pullen.

I sympathize with the bettors who might have been smartened up to the results, saw an opening, and ran through it. I especially sympathize with bettors like Hamilton who nailed the result without any inside knowledge. If bets were made before Thursday’s event was held, shouldn’t they be honored?

I’ve heard that the NHL wasn’t aware that sportsbooks were taking bets on these skills events. I suppose it’s the ultimate tribute to how closely they guarded this secret that they were.

Going for the gold

The Beijing Olympic men’s hockey tournament begins on Wednesday with preliminary round games. With the NHL not participating in the Winter Games, figuring out the contenders for the gold medal becomes a bit trickier.

The Russian Olympic Committee is the favorite in the books that are offering gold medal odds. Before the start of the tournament, Caesars and Draft Kings have them at +150, while Sports Interaction have them at +140.

It’s a reasonable assumption they’ll challenge for gold. The last time the NHL opted out of the Olympics in 2018, the Olympic Athletes from Russia won gold after opening at a 7-to-4 favorite. The ROC roster is comprised mostly of players from the Kontinental Hockey League and is peppered with former NHL players like Slava Voynov, Mikhail Grigorenko, Artem Anisimov and Nikita Gusev. They’ll be quite good.

Ah, but there can be surprises! Consider that Germany, which won silver in PyeongChang, was a 66-1 choice in the pre-tournament odds.

You read that right. A $100 wager on the host Chinese to win the gold medal at the Beijing Games would net you over $20,000. Do you believe in miracles?

Speaking of which, those are intriguing odds for the Americans. Keep in mind they have 15 NCAA players on the roster, which is either going to result in fast, spirited play or a “not ready for primetime” wipeout in the preliminary round. The U.S. is a longshot, for sure. Canada, meanwhile, has some value to it at +500. They have offensive pop up front, including former NHL star Eric Staal as captain, and a goalie (Devon Levi) who has the ability to steal games.

The ROC is the favorite, but I don’t think it’s nearly as rock-solid as last time.

Toronto and the 1st period over

Here’s an absolute trend. Analyst Chris Otto notes that the Maple Leafs are 15-2 in their last 17 games on the first-period over (1.5 goals), hitting it 88.2% of the time. That’s been fueled by a current seven-game streak of first-period overs. Toronto has scored 53 goals in the first period, second only to Florida.

Florida and the over

The Panthers were one of the biggest topics at the NHL’s All-Star media day, what with their being tied with the Colorado Avalanche atop the goals-per-game charts (4.09). They’ve hit the over in five of their last six games, including a total of seven goals in an 8-4 win over the Blue Jackets. They’re 61.7% to the over this season and there’s no reason to believe this will end any time soon — especially since their goaltending continues to slip, as their team save percentage (.910) now ranks 12th in the NHL. Trend.

Boston and the puck line

Usually, a 10-game losing streak for a Boston team would light up the switchboard at WEEI for a week. But this one is more subtle — unless you’ve bet the Bruins on the puck line recently, in which case… yikes! Boston is 0-10 against the puck line in its last 10 games. For the season, they’re now just 17-26-0 (39.5%). The streak includes six games in which the Bruins won on the moneyline and lost. Before this streak, they covered the puck-line in five straight wins. There’s no need to light up sports talk radio. They’ll be OK. Trick.