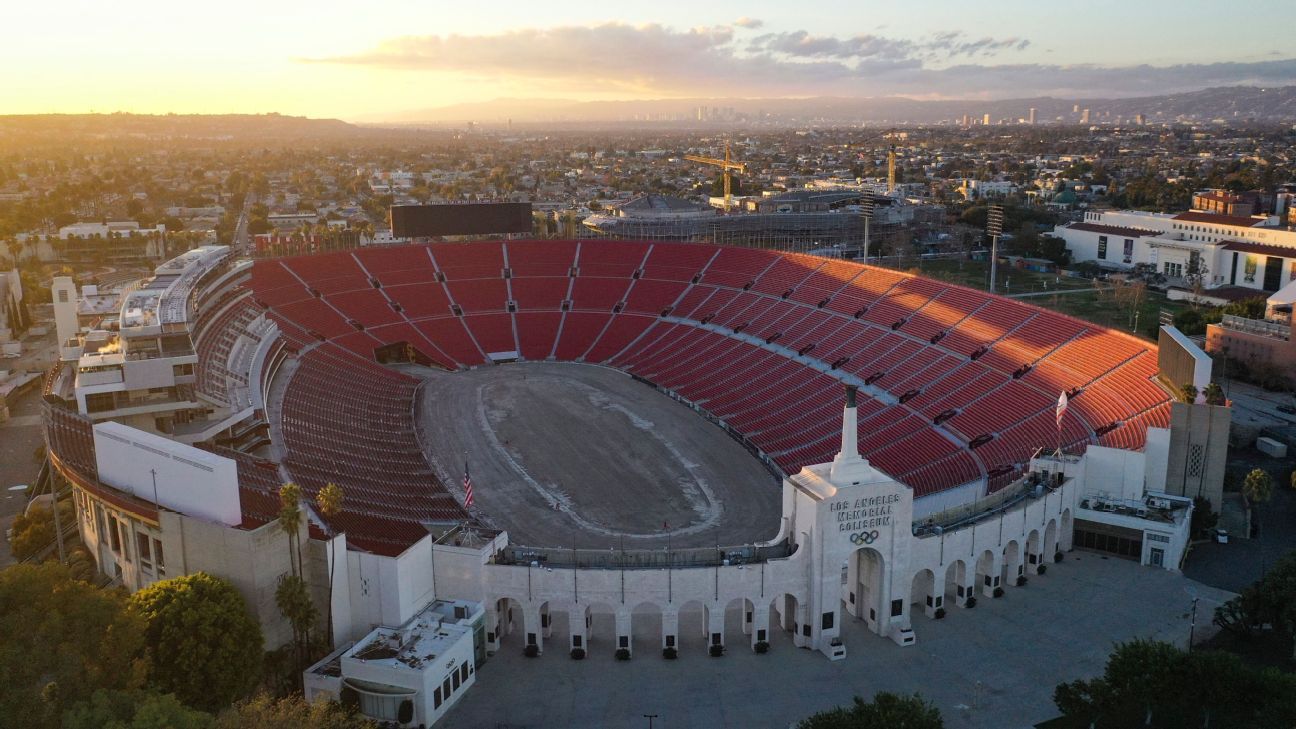 “The Colosseum. Oh, you should see the Colosseum, Spaniard. Fifty-thousand Romans. Watching every movement of your sword. Willing you to make that killer blow. The silence before you strike. And the noise afterwards. It rises. It rises up like … like a storm. As if you were the thunder god himself.”

— Proximo to Maximus, Rome (from “Gladiator”)

There has been, will be and should be much buzz about this weekend’s Busch Light Clash at the Los Angeles Memorial Coliseum. The format of the event will be old-school short-track stock car cool, with single-car qualifying and heat races on Saturday, followed by a last-chance qualifier and the main event — a 23-car, 150-lap cage match — on Sunday.

It will be held on a quarter-mile asphalt bullring constructed atop the playing field that is normally the home of the USC Trojans, wrapped in 77,500 recently refurbished seats that have witnessed a World Series, Super Bowl I and a pair of Summer Olympics (with another slated for 2028), not to mention the X Games, the Monsters of Rock tour and the Lingerie Bowl.

Now the Coliseum will become the 16th facility in California and the seventh in SoCal to host NASCAR’s premier series. That’s right, seven places in the greater Los Angeles area have been invaded by the various iterations of the Cup Series since Carrell Speedway, aka the Gardena Bowl, hosted the fourth event of NASCAR’s third-ever Strictly Stock (now Cup) Series season. Unlike Sunday’s exhibition, those others were all real points-paying, regular-season races, run during seasons packed with 40, 50, even 60 events.

“They used to race anywhere and everywhere, man,” explains His Royal Fastness, King Richard Petty, who counts among his record 200 wins a whopping five trips to Victory Lane at another SoCal facility that used to kick off each season, the long-since-gone Riverside International Raceway.

“Way back when, when I was watching Daddy (fellow NASCAR Hall of Famer Lee Petty) race, if a place would agree to host NASCAR, then NASCAR would show up. And they showed up to some weird places.”

Weirder than a football stadium in the shadow of downtown Los Angeles?

We did. So, to get you into the right mindset for Sunday’s Busch Light Clash, here’s a list of the oddest joints that ever shoehorned a bunch of chrome horns into their place to go racing.

That’s nearly a half-century of open dates for hosting all kinds of stuff, from the Army-Navy football game to the International Eucharistic Congress to, yes, auto racing. A lot of auto racing. In 1935, a cinder oval was laid down around the outskirts of the football field, and by the 1950s it had been paved. High-banked turns were constructed, jutting out over the first few rows of the end zone seats.

The racetrack became known for providing too-close quarters between fans in the stands and the machines they came to see. Andy Granatelli, most famous for creating the legendary STP branding throughout auto racing, was the promoter of weekend racing at Soldier Field. The man they called “Mr. 500” was also known to put hockey-style goons into the starting lineup to make life difficult on the stars and would pay bonuses to any racer who was willing to flip their car or wreck spectacularly to keep the crowds revved up. On July 21, 1956, Fireball Roberts held off a star-studded 25-car field as well as a persistent rain shower to earn the second of his five wins on the season.

The racetrack was removed in 1970, presumably to make room for the Bears as they moved across town from Wrigley Field. But in perhaps my favorite line ever penned about motorsports, legendary stock car historian Greg Fielden once wrote of the end of Soldier Field’s oval: “Track torn out in 1970 following protests by hippies who objected to city financing of auto racing.”

The ballpark known as “The Rockpile” became famous as the home of the Buffalo Bills (not to mention the home stadium of Robert Redford’s New York Knights in “The Natural”). Like Soldier Field, it also housed a cinder-turned-asphalt bullring between its walls and the sidelines. It hosted sprint car races and a pair of NASCAR events, the first being a Convertible Division (yes, that was a thing) race won by NASCAR Hall of Famer Joe Weatherly in 1956.

The Cup Series arrived two summers later, when Jim Reed earned the third of his seven career wins, all of which came in 1958-59. The race was 100 laps, so it measured only 25 miles, still the shortest Cup Series race distance-wise that’s ever been run. It lasted 32 minutes. Elbow room was so tight that pit stops had to be performed across the parking lot at a National Guard armory.

“That race was over so dang fast I thought the caution had come out, but it was the checkered flag,” recalls Richard Petty, then a rookie making only his second Cup Series start who finished 11th out of 19 cars. Father Lee finished sixth. The following summer, the track was removed to make room for the Bills and the NASCAR-like speedy downfield offensive football showcase that was the AFL.

While we’re all making such a big deal about the Coliseum hosting college football and then becoming a quarter-mile asphalt oval before going to back to becoming a college stadium again, the folks at the place they call “The Madhouse” are thinking, “WTH?! We do that all the time!”

Bowman-Gray Stadium opened on the east side of Winston-Salem in 1937, immediately hosting Wake Forest Demon Deacons football games and soon adding its first slate of auto races around the football field. In 1964 alone, Junior Johnson, subject of the film “The Last American Hero,” won a race just two weeks before Brian Piccolo, subject of the film “Brian’s Song,” started the season in which he led the nation in rushing and scoring. The Deacs moved into a new stadium in 1967 and The Madhouse hosted its last Cup race in ’71, but the NASCAR Weekly Series still races at BGS every summer and the Winston Salem State Rams have played football there every fall since 1956. In 2007, WSSU deepened the connection by starting a motorsports management program that has placed dozens of students into jobs with NASCAR teams.

Known in later years as simply Portland Speedway, the flat, wooded fairgrounds track was infamous for a manhole cover that sat right smack in the middle of the racing groove at the exit of Turn 4. But anyone who ever visited there before it closed in the late 1990s knows the real star of the show was where they showed the stars, a giant movie screen located just off the backstretch. When cars weren’t racing at Portland, they were parked in rows in the racetrack infield, packed with locals watching movies at Rose City’s favorite drive-in theater.

Horse tracks hosting horsepower used to be commonplace from Shreveport, Louisiana, to Las Vegas (where the Hilton is now) to Dog Track Speedway in Moyock, North Carolina. It makes sense. Back then, auto racers preferred dirt surfaces, and the equestrian world already had plenty of ready-made places to race. One of the Bay Area’s classic horse racing facilities also held a pair of IndyCar events and three Cup Series races, with wins earned by West Coasters Herschel McGriff and Eddie Pagan, as well as NASCAR Hall of Famer Tim Flock. Flock famously ran several races with a pet monkey in his car — Jocko Flocko, complete with a little helmet and uniform. So, it’s a safe bet the animal lover would have also loved the fact that in 1955 he stood in the same winner’s circle where Seabiscuit had been twice before.

The home of the Asheville Tourists, a longtime legendary minor league baseball team, has seen homers slugged into the woods beyond its outfield walls by the likes of Ty Cobb, Babe Ruth, Lou Gehrig, Willie Stargell and Todd Helton. But in 1956, the 32-year-old ballpark found itself without a baseball tenant. So, it was leased out to racing promoters from nearby Wilkesboro, North Carolina, and a quarter-mile oval was carefully paved around the infield diamond. McCormick Field hosted two summers of racing that were dominated by the likes of Banjo Matthews, Ned Jarrett and Ralph Earnhardt, who often had his young son Dale in tow.

Navigating McCormick was not easy. Whenever someone would lose control and jump the tire barrier to accidentally drive across the infield, the stadium groundskeeper would angrily chase after them. In the lone Cup Series event, won by Jim Pachal, Lee Petty lost control of his Oldsmobile and crashed into a dugout. Baseball returned in 1959 and the racetrack was removed, but in the woods lining the ballpark, you can still find chunks of discarded asphalt, and the concrete racetrack retaining wall is now the foundation of the left field fence.

Races on airport runways were surprisingly frequent back in the day, from the 1.6-mile road course run up and down the Titusville-Cocoa Airport in Florida (winner Fireball Roberts, 1957) to the Montgomery Air Base in New York that strung together three runways to create a Pocono-ish triangle with chicanes added in the corners (Rex White won there in 1960).

But NASCAR’s first true road course event was held on a tarmac. On June 13, 1954, 43 cars zigzagged their way around the runways of an airport within earshot of Staten Island. The whole event was unusual, from the style of racing to the race cars themselves. NASCAR, founded on the very specific idea of showcasing American-built sedans, decided to allow sports cars, including convertibles, to enter the 100-mile road event.

As a result, Buck Baker’s Oldsmobile, Herb Thomas’s Hudson Hornet and Lee Petty’s Dodge found themselves mixing it up with MGs, Porsches, Jaguars and Morgan Roadsters. The winner was Al Keller, who earned $1,000 in a Jaguar, the first win for a foreign car maker in NASCAR’s six-year history and the only non-domestic car to win in the Cup Series for nearly 55 years, until Kyle Busch earned a victory at Atlanta Motor Speedway in a Toyota Camry on March 9, 2008.

NASCAR’s strangest venue is also arguably its most beloved among truly old-school racers and fans. The original version of the track opened in 1936, a decade before NASCAR was founded in the nearby Streamline Hotel. The new sanctioning body’s signature event, the crown jewel of the original Daytona Speedweeks, was held on a paperclip of a layout that ran 2 miles south on the gritty, bouncy blacktop of Highway A1A, then veered left off that road to slide out onto the sands of Daytona Beach. Then they raced 2 miles north on that sand, dodging ocean water at more than 100 mph until slinging it back out onto the highway and starting all over again.

“The biggest challenge I had racing on the beach was the guts,” Tim Flock explained to me in 1998. He won back-to-back races on the Beach & Road Course in 1955-56 before NASCAR moved to the brand-new Daytona International Speedway in ’59. “I don’t mean my guts as a race car driver. I mean actual guts. If you were leading the start of the race and were the first car to race out onto the beach, you’d end up driving through a bunch of seagulls and there’d end up being guts and feathers everywhere.”

While none of us have an idea exactly what will happen when NASCAR takes the green flag at the L.A. Coliseum this weekend, we do know that it will be different. It will be weird. But The King is right. It won’t be weirder than that.

FTSE 100 reaches all-time high
Bill Gates says Elon Musk’s ambition to colonize Mars is not a good use of money
‘Greenwashing’ is a good thing, according to one renewable energy tycoon
British Steel draws up plan for 800 job losses amid government funding talks
Menacing charge for Bengals RB Mixon dismissed