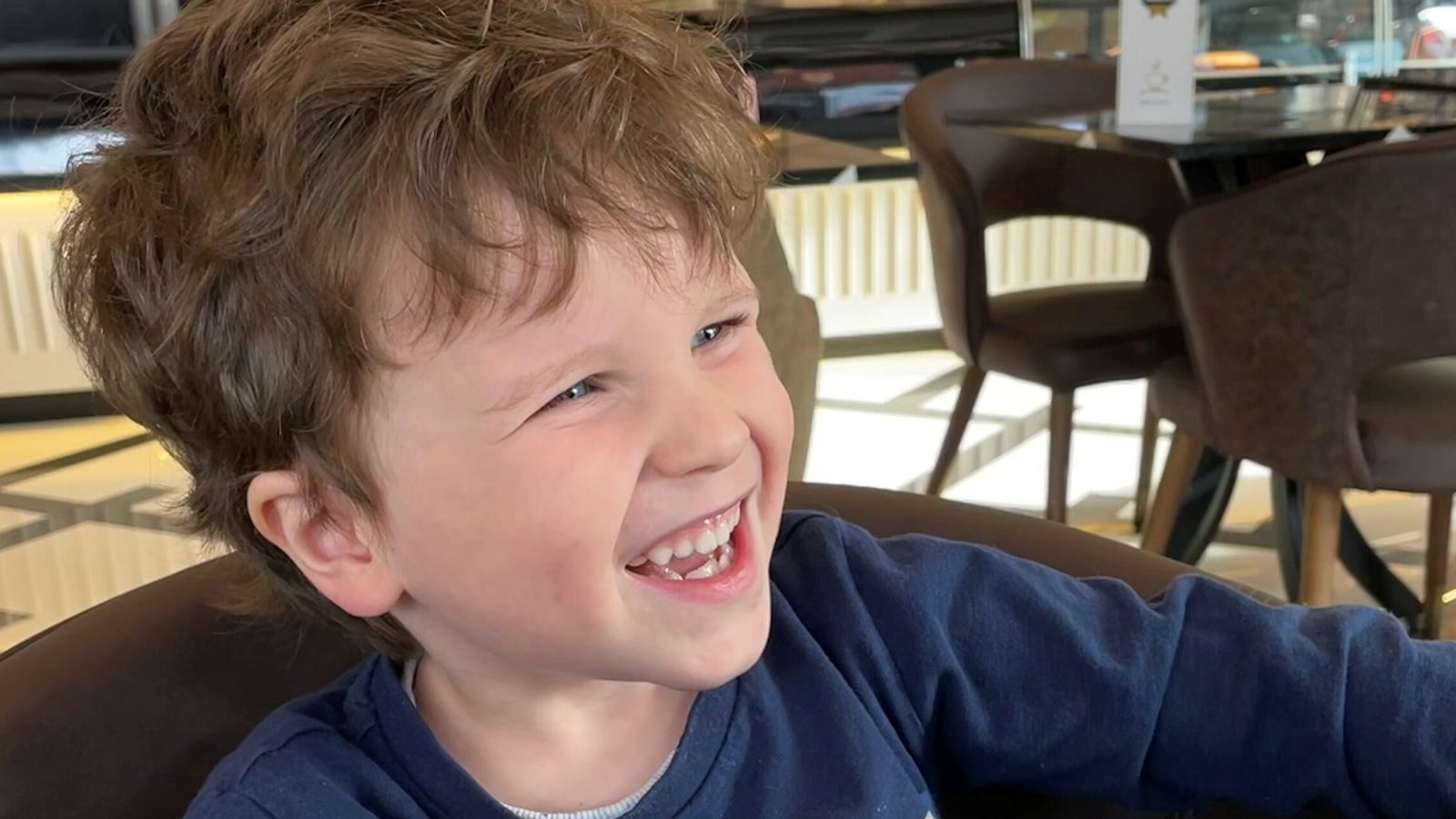 The youngest patient ever to be treated using NHS pioneering beam therapy is celebrating a milestone anniversary.

Teddy Slade was just 18-months-old when he was diagnosed with a rare brain tumour.

For his mother Amy, it was simply “terrifying”.

But having now just turned four, Teddy is at pre-school, well, happy and “a funny, little, cheerful character” who is marking the three-year anniversary since the ground-breaking therapy was made available to him for the first time on the NHS in England.

After surgery to remove the tumour, Teddy was given the treatment at the newly-opened Christie Cancer Centre in Manchester for six and a half weeks.

And now Teddy, who lives in Stockport with mum and dad, Amy and Dan, only requires regular check-ups to monitor his progress – and is living a full and normal life.

“He has a really good prognosis,” Amy told Sky News.

“It’s certainly made us live for the day and appreciate every moment.”

Proton beam therapy is a specialist form of radiotherapy that targets cancers very precisely, increasing success rates and reducing side effects, which makes it an ideal treatment for certain cancers in children who are at risk of lasting damage to organs that are still growing.

“A diagnosis like Teddy’s is terrifying and devastating,” said Amy.

“We were told initially he had a mass on his brain – and honestly it’s not really until the hours and days after that conversation that you realise they are talking about cancer.

“And then you head straight into a very surreal world.

“It was absolutely heart-breaking.”

She said that while Teddy was too young to fully understand what was happening to him, the reality of it was all too clear for her and her husband.

“The proton beam centre at the Christie was a place of hope. The staff were amazing.

“The care that Teddy, and the support our whole family received there, was first-class.

“We are so very lucky to have this life-saving medical technology in Manchester.”

Proton beam therapy has been funded on the NHS since 2008, but patients originally had to go abroad to get their treatment.

It was only when the Christie’s £125m centre opened in late 2018 that patients could be treated in the UK.

“I can’t imagine what that would have been like in a strange place and in hotel rooms abroad,” Amy added.

In 2021, the NHS opened a second centre at University College London Hospitals NHS Foundation Trust, and between them, the two centres will treat up to 1,300 patients every year.

Dame Cally Palmer, NHS England’s National Cancer Director, said that since Teddy first received his therapy treatment at the Christie, more than 700 patients in the UK including 300 children, had benefitted from it under the NHS.

She described the opening of the two centres as “a major milestone for the NHS”, adding: “It marks the completion of our plans to deliver PBT therapy in the UK and radically transform cancer treatment across the country.”

Teddy’s consultant at the Christie, Gillian Whitfield, said it was great to see Teddy doing “so well”.

“We were thrilled to be able to help him here at the Christie.

“Being able to give patients like Teddy this vital proton beam therapy in the UK is fantastic, as it not only reduces the side effects of treatment, but also means families don’t have to travel abroad as many did before.”

The NHS Long Term Plan aims to save thousands more lives each year by dramatically improving diagnosis and treatment of cancer.

By 2028, the NHS hopes that 55,000 more people each year will survive for five years or more following their cancer diagnosis.

Base interest rates up to 4% but Bank of England’s language on economy shifts
One of UK’s most wanted arrested in Morocco over Essex drive-by shooting
Sources: Nets star guard Irving asks to be traded
Community ‘in shock’ over Nicola Bulley’s disappearance – as friends strive to protect daughters
Serrano is headed to Ireland, Baumgardner has plenty of options and Ali continues to improve