Another Tory MP has revealed he has submitted a letter of no confidence in the prime minister over his handling of partygate allegations – the third today.

Sir Gary Streeter, one of the Conservative Party’s longest-serving MPs, is the latest to add his name to the list of those who have publicly announced they are, or have, handed in a letter of no confidence in Boris Johnson.

“I cannot reconcile the pain and sacrifice of the vast majority of the British public during lockdown with the attitude and activities of those working in Downing Street,” the South West Devon MP said.

Sir Gary, who has been an MP since 1992, said he had been waiting for the Sue Gray report to be published and had “not come to this decision lightly”.

Twelve Tory MPs have now publicly called for the PM to go, with seven revealing they have submitted letters of no confidence in him.

A few hours before Sir Gary’s announcement, Anthony Mangnall, MP for Totnes and South Devon, revealed he has submitted a letter of no confidence in Boris Johnson as “his actions and mistruths are overshadowing the extraordinary work of so many excellent ministers and colleagues”.

Senior backbencher Tobias Ellwood, who is chair of the Defence Select Committee, kicked off the submissions on Wednesday, saying he will be submitting a letter as it was “time to resolve this” because the Conservative Party is “slipping into a very ugly place”.

Updates and reaction to no confidence letters being submitted

Culture Secretary Nadine Dorries accused MPs who have submitted letters on Tuesday of having “egos”.

“The defining mission of the PM and this government is to level up the whole of the UK. On the very day we are setting out steps to make this happen, a handful of egos want to make it all about them. It’s selfish, doing Labour’s work and it’s really not helping their constituents,” she posted on Twitter.

At this time I can no longer support the PM. His actions and mistruths are overshadowing the extraordinary work of so many excellent ministers and colleagues.

I have submitted a letter of no confidence.

Peter Aldous said on Tuesday that he would be submitting a letter of no confidence in Mr Johnson to Sir Graham Brady, the chairman of the 1922 Committee. If 54 letters are handed to Sir Graham, a leadership vote will be triggered.

The pressure on the PM comes as the Metropolitan Police is investigating 12 gatherings during COVID restrictions for potential breaches of regulations.

Meanwhile, Number 10 has refused to comment on new reports that reveal details of lockdown parties Mr Johnson is alleged to have attended.

In fresh claims, two newspapers say the PM attended a party in his flat and also went to two separate leaving dos.

The prime minister was hoping he would be able to reset the agenda and move on to policy issues this week.

From Ukraine to levelling up, No 10 were hoping they could shore up support after partygate, at least for now, with the release of Sue Gray’s partial findings on Monday.

Tobias Ellwood’s comments on Sky News – timed for maximum impact on the day of the launch of the government’s flagship policy – are ominous for the prime minister for several reasons.

Here is a senior MP and former minister, who has been critical of the PM before but not in an overtly personal way, joining the 10 other Tories who have already come forward to say they have no confidence in him – from different wings of the party, not one clique.

There is no obligation to make the fact of sending in a letter public, so who knows how many others have done so – or how close we are to the 54 threshold for a contest.

But his accusation that Boris Johnson does not understand the depth of anger and discontent about having to defend the drip, drip of new party revelations will worry No 10.

His unease about the prime minister’s Jimmy Savile slur is shared by others; and so is his criticism that so-called “red meat” policies, such as sending in the Navy to tackle channel migrants, won’t work.

The worry for Downing Street is that behind the scenes, other MPs are quietly soul-searching, and may soon come to the same conclusions as Tobias Ellwood.

Ellwood calls on PM to ‘take a grip of this’

Explaining why he is also putting a letter in to Sir Graham, Mr Ellwood said it is “just horrible” for Tory MPs to “continuously have to defend this to the British public”.

“I don’t think the prime minister realises how worried colleagues are in every corner of the party, backbenchers, and ministers alike, that this is all only going one way and will invariably slide towards a very ugly place,” he said.

“I believe it’s time for the prime minister to take a grip of this; he himself should call a vote of confidence, rather than waiting for the inevitable 54 letters to be eventually submitted.

“It’s time to resolve this completely, so the party can get back to governing, and, yes, I know the next question you will ask, I will be submitting my letter today to the 1922 Committee.”

Mr Ellwood hit out at the current strategy from Number 10, accusing the government of prioritising short-term survival.

He criticised what he said were recent “rushed policy announcements”, including the Royal Navy taking over responsibility for policing migrants crossing the English Channel.

“And attacking this week Keir Starmer with Jimmy Savile… I mean, who advised the prime minister to say this?” Mr Ellwood added.

“We’re better than this, we must seek to improve our standards and rise above where we are today.” 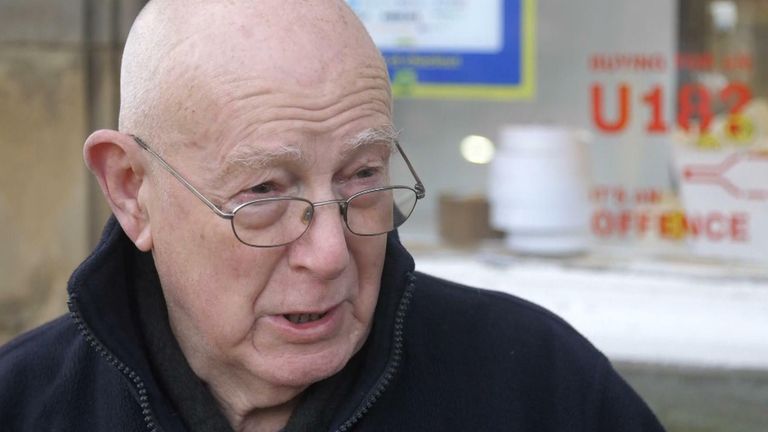 ‘He should be gone’: Public on PM

Facing MPs as he delivered a statement on the Gray report, Mr Johnson accused Sir Keir, the Labour leader, of failing to prosecute sex offender Jimmy Savile when he was director of public prosecutions.

Victims of Savile have called on the PM to withdraw the discredited claim, which Sir Keir has described as a “ridiculous slur peddled by right-wing trolls”.

Also speaking to Sky News, former education secretary Justine Greening said it is “up to Tory MPs to decide what to do” as it is clear that Mr Johnson “isn’t going to resign”.

How likely is a no confidence vote?

A handful of Tory MPs are understood to have handed in letters of no confidence following the lockdown events in Downing Street and Whitehall.

The only person who knows the true figure is Sir Graham, who does not publicly say how many letters have been received.

A total of 54 letters – 15% of the parliamentary party – are needed to trigger a leadership vote.

If Mr Johnson were to win such a ballot, he would be immune from another leadership challenge for a year.

Were he to lose, he would have to resign and a successor as party leader and PM would be chosen.