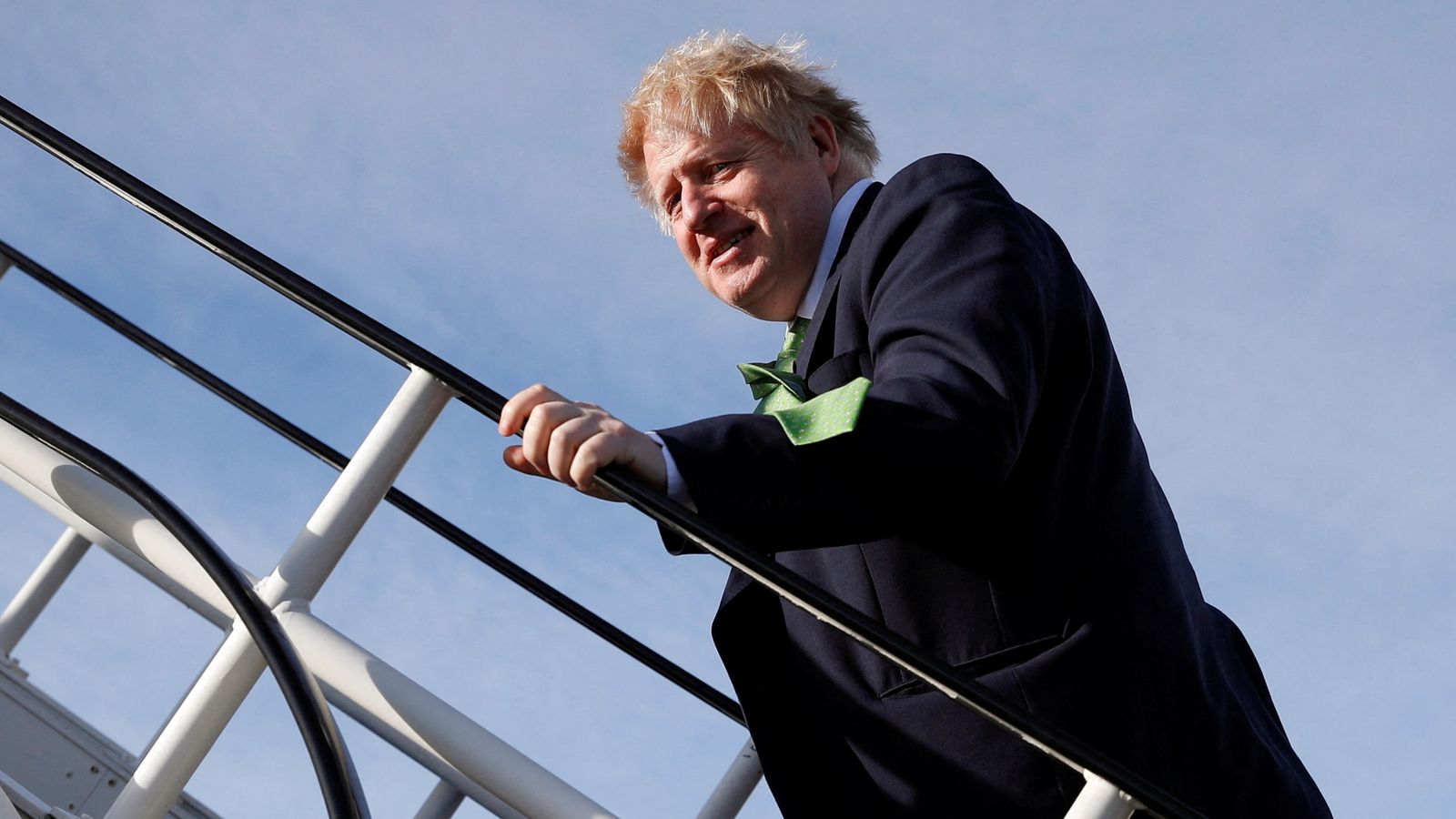 The public would “hypothetically” be told if the prime minister was fined for breaking COVID rules, Downing Street has said – reversing an earlier assertion that refused to guarantee that would happen.

When asked earlier whether any fixed penalty notices would be made public, the prime minister‘s spokesman said it was for the Metropolitan Police to decide whether to reveal who has been fined over the lockdown events as it carries on with its investigation into 12 parties.

But now, after being asked again, he said: “As the Met have made clear, generally speaking with Fixed Penalty Notice, individuals are not published in any way. Obviously we are aware of the significant public interest regarding the prime minister, and would always look to provide what updates we can on him specifically.”

Asked if that meant No 10 would say if he was given a fixed penalty notice, the spokesman said: “Hypothetically, yes.”

It comes as another Tory MP has handed in a letter of no confidence in Mr Johnson.

Peter Aldous, MP for Waveney in Suffolk, said he has written to Sir Graham Brady, chair of the 1922 Committee of backbench Conservative MPs, advising him he has no confidence in Mr Johnson as leader of the Conservative Party.

“After a great deal of soul-searching, I have reached the conclusion that the prime minister should resign,” he wrote.

“It is clear that he has no intention of doing so.

“I have never taken such action before and had hoped that I would not be put in such an invidious position.”

Mr Aldous, who has been an MP since 2010, is among a handful of Tory MPs who are understood to have handed in letters of no confidence following the lockdown events in Downing Street and Whitehall – with 54 letters needed to trigger a leadership vote.

Speaking about any potential fines over lockdown parties, the prime minister‘s spokesman said earlier today: “It will be the Met that sets out what they see fit at the conclusion of their work and I would not seek to set out what that may or may not be.”

The Met pointed to College of Policing guidance which says that the names of people handed fixed penalty notices, the likely punishment for breaching COVID regulations, would not normally be revealed.

Number 10 ‘cannot be allowed to backtrack’

“Identities of people dealt with by cautions, speeding fines and other fixed penalties – out-of-court disposals – should not be released or confirmed,” the guidance states.

Labour’s deputy leader Angela Rayner said the public “have a right to know” if Boris Johnson is given a fine.

“Number 10 said they would publish the full report. They cannot be allowed to backtrack or hide the results of the police investigation,” she said.

I can’t believe this needs saying.
The public have a right to know if the Prime Minister is found to have committed an offence by the police.

Number 10 said they would publish the full report. They cannot be allowed to backtrack or hide the results of the police investigation. https://t.co/s7POt2y5jR

Sir Ed Davey, leader of the Liberal Democrats, said: “This stinks of a cover up by Number 10. Even Richard Nixon [the US president who resigned over the Watergate scandal] believed a country deserves to know whether their leader is a crook.

“Boris Johnson must come clean with the public and resign if he’s broken the rules and been fined by the police.”

Asked if Downing Street should say if Mr Johnson is fined by police, Tory MP and former minister Liam Fox told Sky’s deputy political editor Sam Coates: “I think we should have as much information as we can put out there.

“I think it’s the only way to get closure in the end.” 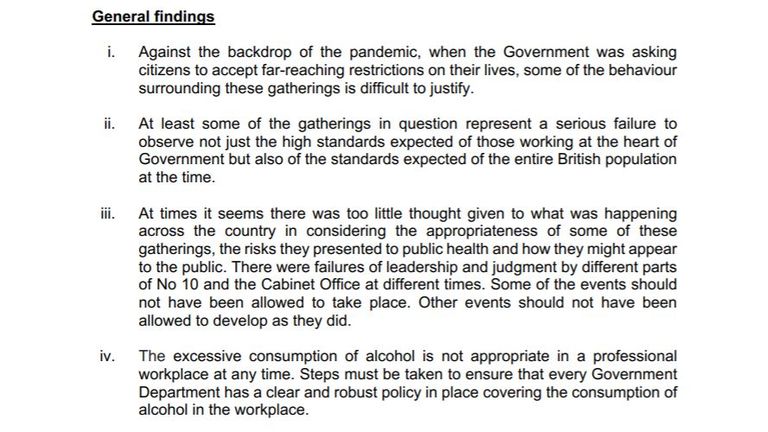 Number 10’s latest comments come after the release of a partial version of Sue Gray‘s report into Downing Street gatherings during COVID-19 restrictions in 2020 and 2021.

The senior civil servant said the events represented a “serious failure” and were “difficult to justify”.

Facing MPs in the Commons on Monday, Mr Johnson apologised and promised a shake-up of Number 10, insisting: “I get it and I will fix it.”

The Metropolitan Police is investigating 12 gatherings, including an event that happened at the Downing Street flat on 13 November 2020 and an event to mark the PM’s birthday on 19 June 2020.

The force said on Monday that it has received more than 300 photos and 500 pieces of paper as part of its inquiries.

Downing Street has said Mr Johnson will ask Ms Gray to “update her work” once the Metropolitan Police’s investigation is finished and “he will publish that update”.

Speaking to Sky News earlier on Monday, Labour leader Sir Keir Starmer said people who followed COVID rules “will feel like they’ve been taken for mugs” by the PM.

He told Kay Burley that many members of the public will have felt “anger, grief and guilt” when looking back at how they obeyed COVID-19 restrictions over the last two years and the sacrifices they had to make.

Sir Keir said Mr Johnson is “debasing the office” of PM and has “got to go” in the wake of the release of a partial version of the Gray report, which he described as being as “damning as it could be”.

“If he does start answering specific questions that have been referred to the police, he will be accused, in fact fairly and rightly, of prejudicing or preventing or interfering in that investigation,” Mr Raab said. 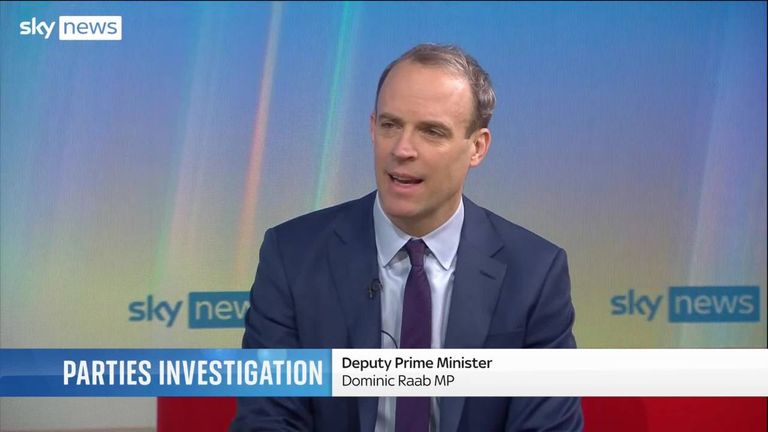 ‘I get argument about double standards’

He said it was right that police were now given the “time and space” to carry out their investigation.

Sir Keir said Mr Raab’s stance was “nonsense” and “bordering on the ridiculous”, accusing the PM of “forcing all of his frontbenchers onto your programmes and others to make complete fools of themselves, peddling these absurd defences”.

Speaking to Kay Burley, he said Mr Johnson has “demeaned the office and he should have gone by now”. 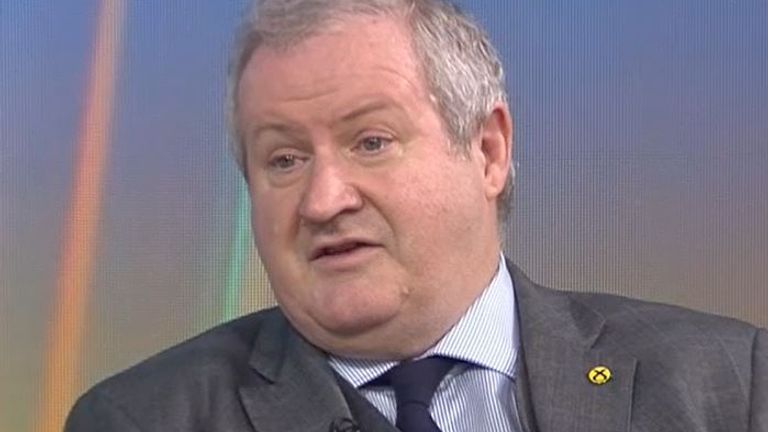 PM is ‘stranger to the truth’

Mr Blackford was thrown out of the Commons on Monday for accusing the PM of having “wilfully misled” MPs over the partygate row.

He defended his actions as the “right thing to do”, adding: “At the end of the day I’ve been sent to Westminster to stand up for our constituents, to lead the SNP at Westminster.

“I have to call out the PM for the charlatan that he is.”