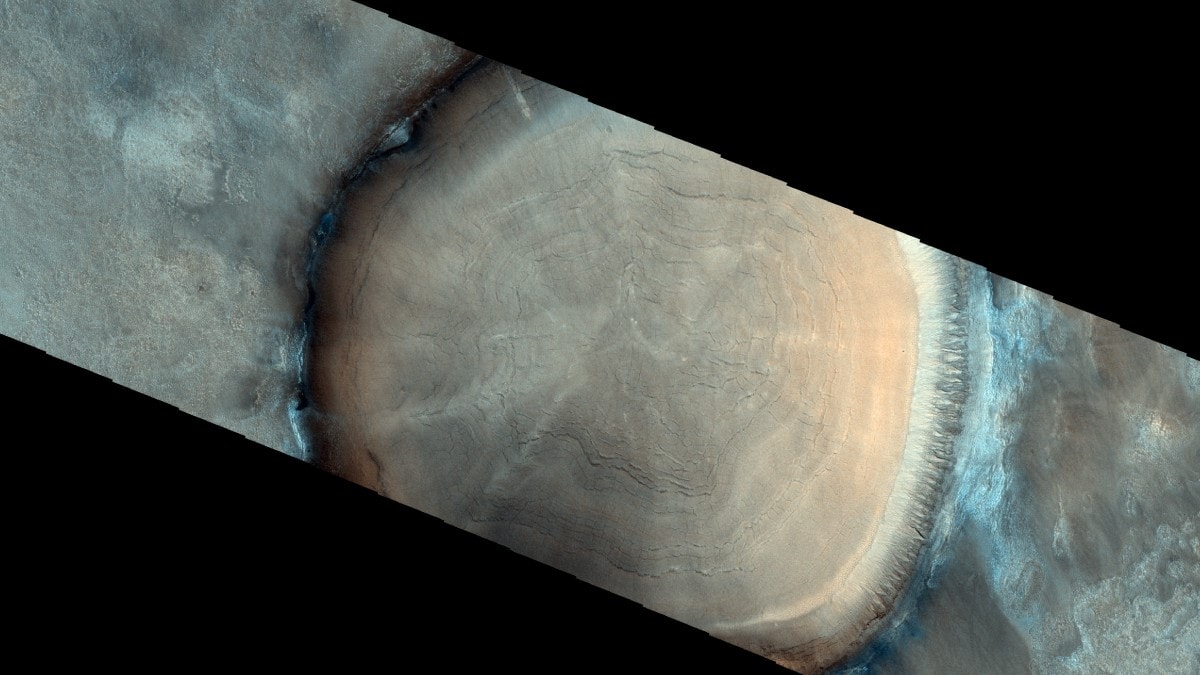 Don’t be surprised if you look at photos of the surface of Mars and see a giant cross-section of a tree stump. Recent photos of the Red Planet show large concentric rings on the surface. These rings look very similar to a tree stump’s rings. But that’s not the case. The European Space Agency (ESA) released a photo and explained the image through a statement on their website. The image is actually a bird’s eye view of an ice-rich impact crater on the surface of Mars. The photo was taken on June 13, 2021.

The image was taken by the Color and Stereo Surface Imaging System (CaSSIS) camera onboard the ExoMars Trace Gas Orbiter (TGO), which is a joint venture between the ESA and Russian space agency Roscosmos. The TGO circles Mars and collects data about its sparse atmosphere. This particular image refers to the northern plains of Acidalia Planitia.

The statement released by ESA reveals some of the scientific speculations around this image. Deposits in the interior of the crater may be rich in water-ice. These deposits could have been the result of a change in Mars’ tilt. The planet has a history of drastic changes in its spin axis. The planet’s transformed spin allowed ice to form at lower altitudes than was previously possible.

The concentric rings on Mars have peculiar features that have come to ESA’s notice. Quasi-circular and polygonal patterns of fractures are some of these physical features. These patterns and fractures could have resulted from seasonal changes that cause cycles of expansion and contraction of the ice-rich material. These seasonal changes are also related to the tilt of Mars. According to a Live Science report, the tilt of Mars has changed more dramatically over the decades as compared to Earth’s spin axis.

The TGO started orbiting Mars in 2016 as part of the space agency’s ExoMars mission to study the red planet from its orbit and surface. It has delivered several images like this and also continues to provide data on Mars’ atmosphere, geology, history and more.

‘It’s bad news for the UK economy’ as IMF predicts shrinkage of 0.6%
Couple jailed for 10 years over viral video showing them dancing at Iran landmark
Westminster’s ‘nepo babies’ are here to stay – whether we like it or not | Adam Boulton
Nadhim Zahawi sacked as Tory chairman over tax affairs row
Sources: Chelsea sign Fernandez for record fee