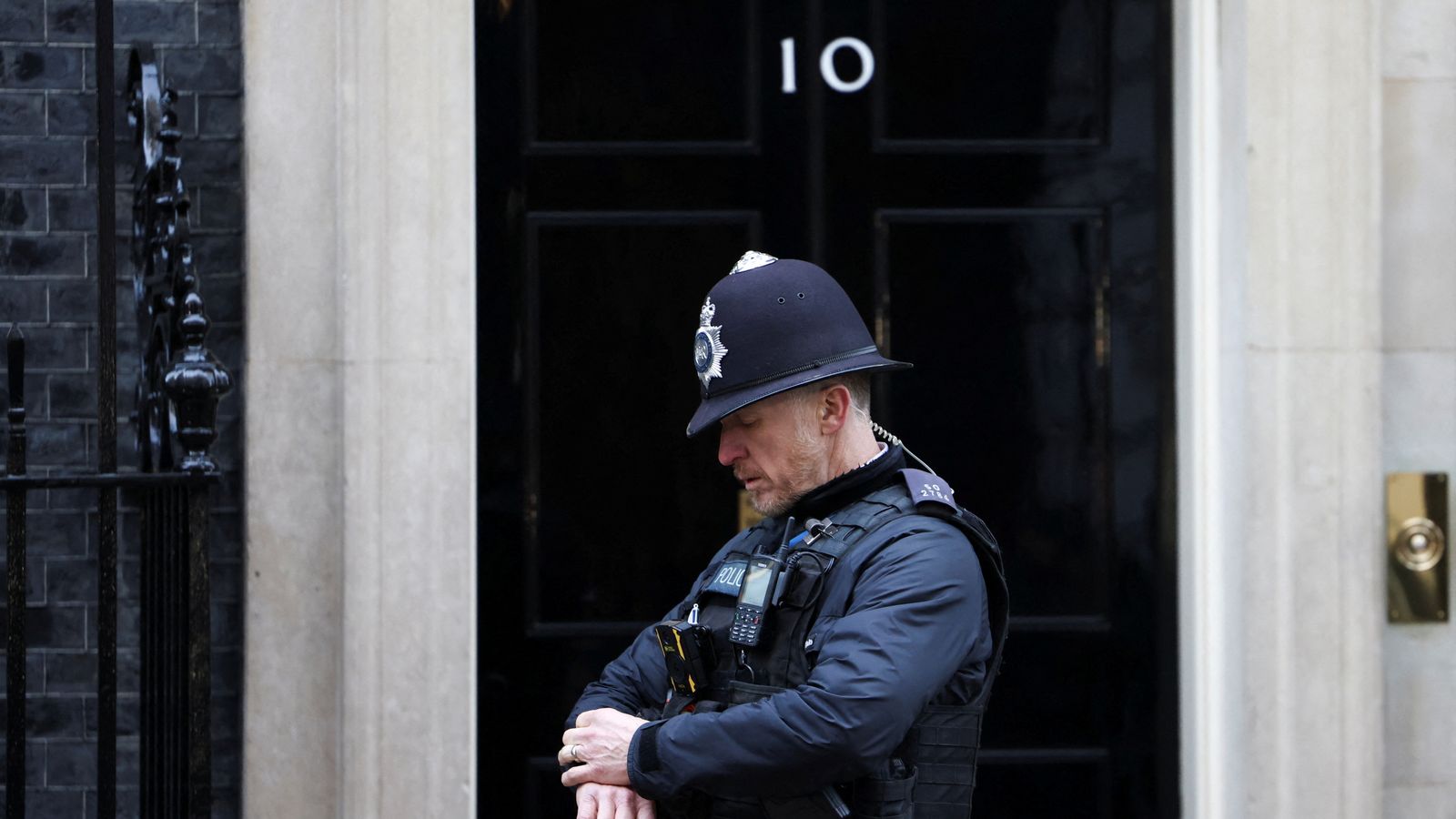 Twelve alleged lockdown-busting gatherings are being investigated by the Metropolitan Police as part of the Downing Street partygate row, it has been revealed.

The Scotland Yard investigation is the second inquiry to take place into claims Number 10 officials – including Prime Minister Boris Johnson himself – were partying in 2020 and 2021 in breach of strict COVID rules.

It follows a Whitehall probe, led by senior civil servant Sue Gray, into the allegations that have imperilled Mr Johnson’s political future.

What exactly are the Met Police investigating?

Scotland Yard have confirmed they are investigating eight alleged events in 2020 and 2021 after receiving “significant evidence”.

These include claims relating to:

20 May 2020 – This is the day on which Mr Johnson has admitted attending a gathering in the Downing Street garden at the height of the UK’s first national lockdown. According to a leaked email, one of the prime minister’s chief aides invited Number 10 staff to a “bring your own booze” event in order to enjoy the spring sunshine that evening. Mr Johnson has admitted to attending the gathering with “groups of staff” for 25 minutes. But the prime minister has stressed he believed it was a “work event”.

18 June 2020 – This is reported to have been a leaving event for a Number 10 private secretary that was attended by about 20 people, with wine allegedly drunk. Sir Mark Sedwill, the then cabinet secretary and head of the civil service, is said to have “briefly attended” and sanctioned the event.

19 June 2020 – This was Mr Johnson’s 56th birthday. It has been claimed that up to 30 people attended a celebratory gathering in the Cabinet Room with picnic food from Marks & Spencer and a cake. It is also alleged that a further gathering took place that evening in the prime minister’s Downing Street flat. However, Number 10 have disputed that the evening event breached lockdown rules. And they have said the Cabinet Room gathering took place “briefly” with staff who were working that day, with Mr Johnson present for less than 10 minutes. It has also been denied that the prime minister’s now wife, Carrie Johnson, organised the event or bought a cake.

13 November 2020 – This is the day that Dominic Cummings, the prime minister’s former chief adviser, left Downing Street after losing a bitter internal power struggle. It has been alleged that a “victory party” was held in the prime minister’s Downing Street flat by friends of Mrs Johnson with Abba tracks, including “Winner Takes It All”, being played. A spokesman for Mrs Johnson has said the claims she held a party in the flat are “totally untrue”. The prime minister has also told the House of Commons that a party did not take place.

15 December 2020 – The PM hosted a Christmas quiz in Downing Street, with some staff joining virtually and others allegedly crowded around desks. The PM was pictured reading out questions with staff wearing tinsel and a Santa hat next to him, with a bottle of sparkling wine and crisps. The Met was originally not investigating the event but after the picture with the bottle appeared on 9 February 2020, it said it would rethink its position.

17 December 2020 – There are three events alleged to have taken place on this day. These include a quiz, described as a “Christmas party”, in the private office of Cabinet Secretary Simon Case; a leaving drinks event also held in the Cabinet Office to mark the departure of a senior member of the COVID taskforce; and a gathering in Number 10 on the departure of a team member.

18 December 2020 – This is the date of a claimed Christmas Party held by Downing Street staff. In a video recording from four days after the alleged event, senior Number 10 advisers were revealed to have jokingly referred to a “business meeting” and a “cheese and wine” event. This led to the resignation of Allegra Stratton, the prime minister’s former press secretary. According to reports, around “40 or 50” people crammed “cheek by jowl” in a room in Number 10 for the event.

14 January 2021 – This has been reported as a “prosecco-fuelled” leaving do for a Number 10 aide during which Mr Johnson is alleged to have given a speech thanking the official for their work and staying for around five minutes.

16 April 2021 – On the eve of Prince Philip’s funeral – for which COVID rules obliged the Queen to sit alone – two parties are reported to have taken place at Number 10. It has been claimed that around 30 Downing Street staff drank alcohol into the early hours at the two events, with one attendee said to have been sent to a nearby supermarket with a suitcase to be filled with bottles of wine. A staff member is also alleged to have used and broken a child’s swing in the Downing Street garden belonging to Mr Johnson’s son, Wilfred. Number 10 has said that Mr Johnson was not in Downing Street that day.

Is the Met Police investigation different to the Sue Gray report?

The Met Police investigation was only instigated after Ms Gray – who is looking into a further four alleged events – had already begun her work.

As a result, Ms Gray has so far not published the full findings of her inquiry so as “not to prejudice the police investigative process”.

The senior civil servant has handed over the material she has compiled in the course of her investigation to the Met Police.

Scotland Yard said those four other events that Ms Gray investigated, but do not form part of their inquiries, are “not considered to have reached the threshold for criminal investigation”.

How are the police investigating?

The Met Police has been handed more than 300 images and more than 500 pages of information by Ms Gray, which they are now reviewing “at pace” to identify which individuals they will need to contact.

How long will it take?

Graham Wettone, a former Met Police officer of more than 30 years’ experience, told Sky News it was hard to know how long the investigation would take due to the number of images and pages of information that Scotland Yard had been given.

“It would be total speculation to say how long it would take them,” he said. “They’ll look to get it done as quickly as possible.

“But, by the same token, because of what the investigation is and the fact – in my view – the Met came to it really late in conducting an investigation, they will also want to do it absolutely correctly and diligently first time round.

“They won’t want to come out with an interim report. They will want to make sure they have crossed the Ts and dotted the Is.”

Mr Wettone added that Scotland Yard would be “very conscious of the fact they need to do it right first time round”, adding: “I don’t think the public or media will take a second, third, fourth go at investigating this.”

Will the PM be interviewed?

Mr Wettone said the prime minister could “potentially” be interviewed by officers as part of the investigation.

“It depends on what’s known about his involvement,” he explained.

“This is where somebody comes in, they’re told they’re not under arrest, they’re entitled to legal advice and they’re free to leave at any time.”

He suggested that, if Mr Johnson had been photographed at one of the events, it “may push them towards speaking to him under caution”.

But Mr Wettone also suggested that officers may find enough information to simply issue the prime minister with a fine without needing to interview him.

“They could issue a fixed penalty notice and allow him then to challenge that if he wants to,” he said.

The former officer turned police commentator said that Mr Johnson, if he was interviewed, would not necessarily have to attend a police station.

“Will it be done at Downing Street? Potentially, yes,” he added.

“I can’t see him jumping in his car and being escorted down to Charing Cross police station or somewhere.”

When was the last time a PM was questioned as part of a police investigation?

In 2006, Tony Blair became the first serving prime minister to be questioned by police as part of a criminal investigation into “cash for peerages”.

Mr Blair was not interviewed under caution and was questioned as a witness, not a potential suspect.

Who is leading the investigation?

The Met Police investigation is being carried out by detectives from the force’s Special Enquiries Team, which specialises in sensitive cases and is being overseen by senior management.

It is being led by Jane Connors, the force’s deputy assistant commissioner and lead for COVID enforcement.

A Scotland Yard source described her to the Daily Telegraph as the “epitome of no nonsense”.

She played a key role in the strategic response to the 2017 Westminster terror attack and has previously been in charge of handling Extinction Rebellion protests in London.

What could the Met Police investigation result in?

Scotland Yard has warned that if their officers “believe it is appropriate because the COVID regulations have been breached without a reasonable excuse” then they could issue fixed penalty notices.

“Once the penalty is paid, the matter is considered closed,” the Met Police added.

“Alternatively individuals may decide to dispute the notice. In these circumstances officers will consider whether to pursue the matter in a magistrates’ court.”

How much are COVID fines?

In England, people aged over 18 can be fined £100 for a first offence of breaching COVID rules, which is lowered to £50 if paid within 14 days.

A £200 fine is issued for a second offence, which doubles for each further offence up to a maximum of £6,400 per offence.

Some have suggested that Mr Johnson potentially faces fines of up to £12,300 if reports of his attendance at rule-breaking gatherings are found to be true.

Mr Wettone described how the police’s “four Es” approach during the COVID pandemic saw them “engage”, “explain”, and “encourage” compliance with coronavirus rules, with “enforcement” as a last resort.

However, he suggested that the prime minister might not be allowed the leniency of the first three steps.

Downing Street has acknowledged that the “significant public interest” in the partygate scandal would see the prime minister reveal if he had been fined for breaching coronavirus rules, should that occur when the Met Police finish their investigation.

However, others who work in Downing Street might not be named if they are fined.

Scotland Yard pointed to College of Policing guidance stating that the names of people dealt with by fixed penalty notices would not normally be disclosed.

But the total number of fines, should any be issued, is likely to be revealed.

The Met Police said their “approach during the pandemic has been to confirm the number of FPNs issued to people at particular events and to explain what those FPNs were issued for”.

‘Screaming’ nephew raised alarm after Marvel actor run over trying to save him
Amazon to start charging delivery fees on Fresh grocery orders under $150
Ukraine War: Will Germany send tanks to Ukraine?
London-listed SPAC targets merger with chronic disease drug developer Istesso
‘I was sad for the institution’: Nancy Pelosi speaks out about McCarthy speaker vote