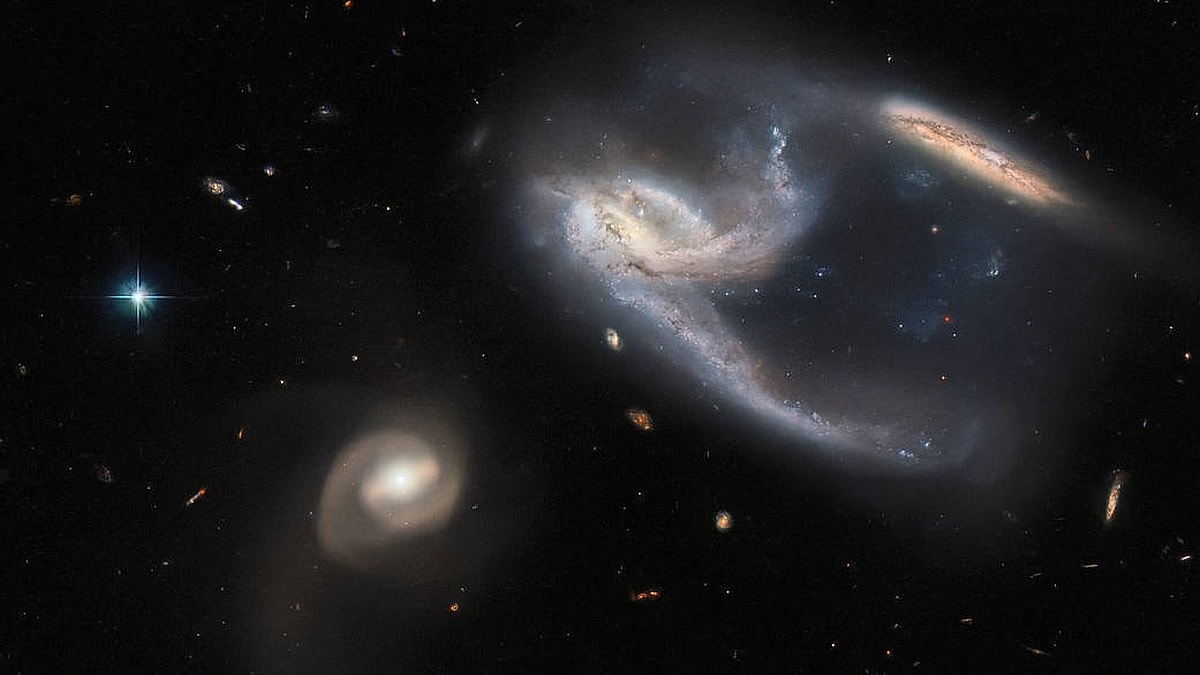 NASA’s Hubble telescope is known to capture spectacular glimpses of spatial objects as it is placed strategically and has an unrestricted view of the universe. It recently released an image of a group of three galaxies, collectively known as NGC 7764A. Placed in the constellation Phoenix, these galaxies are about 425 million light-years from the Earth. The image shows the galaxies interacting with one another, causing two galaxies on the upper right to appear like a starship known as the USS Enterprise from Star Trek, an American science fiction media franchise.

The long tails of stars and gas, extending from the galaxies on the upper right, appear as if they have been hit at great speed by the one at the lower left and thrown into disarray. But that is not to be. Galaxies interact over very long periods of time and they rarely collide. NASA said it is not clear whether the galaxy on the lower left is even interacting with the other two. Because they are so relatively close that they appear to be interacting.

This week’s #HubbleFriday image shows a galactic trio called NGC 7764A. The pair of galaxies interacting in the upper right might even resemble the Starship Enterprise… a least, from our solar system’s perspective!

The three galaxies featured in this image are referred to as NGC 7764A1, NGC 7764A2, and NGC 7764A3, individually. NASA stated in a blog post that the “rather haphazard” naming was probably because many astronomical catalogues were compiled well over 100 years ago. And thus, many astronomical objects have names that sound familiar to the name of other objects and likely causes confusion. The use of modern technology only recently made standardising scientific terminology much easier.

Hubble Space Telescope, a joint project of NASA and the European Space Agency (ESA), has been in service for over three decades since its launch in 1990. It has captured billions of stunning images and shared many of them over time. Recently, it shared an image of a galaxy from the constellation Vela, located about 115 million light-years away from Earth. ESA said Vela was originally part of a larger constellation, called Argo Navis after the fabled ship Argo from Greek mythology.