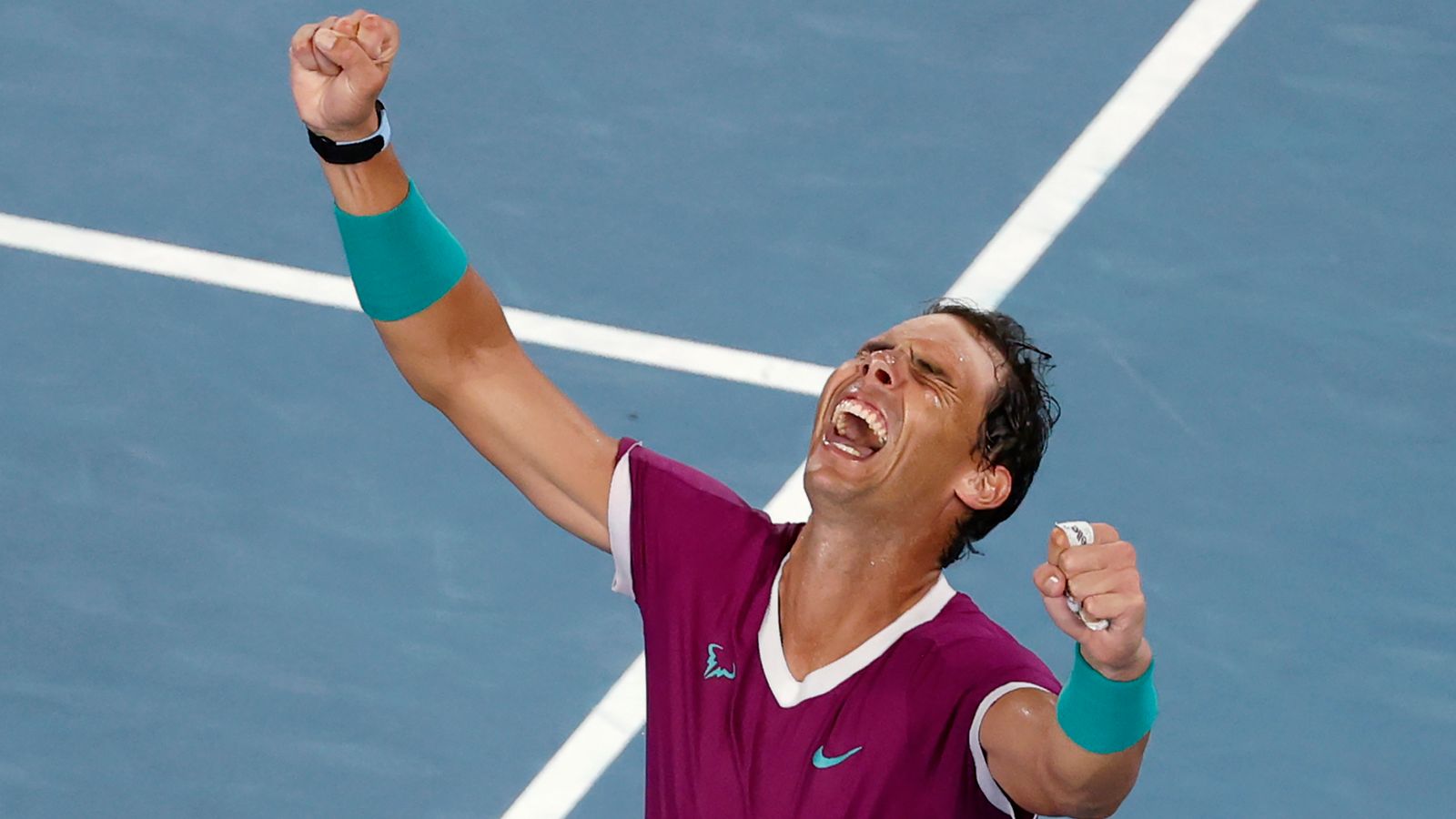 Rafael Nadal has become the most successful man in tennis history by winning the Australian Open and his 21st Grand Slam title.

He took on Daniil Medvedev in a gruelling five-hour and 24-minute marathon – the second-longest in the tournament’s history – to clinch the trophy.

At the winning moment, Nadal dropped his racket to the court in disbelief, before pumping his fists and celebrating with his support team.

The victory also makes him only the second man in the Open era after Djokovic to win each of the four titles at least twice, with Nadal finally adding a second Australia Open crown to the one he claimed in 2009.

It is a remarkable achievement, given Nadal feared a couple of months ago he may have to retire due to a chronic foot problem.

Reaching the final had already exceeded expectations of what Nadal could achieve and at first, it appeared he would fall short after Medvedev moved two sets ahead.

Most of the build-up focused on the historic significance of the Spaniard bidding for his 21st Grand Slam but he found himself under pressure from the start.

He saved two break points in a long third game but was then broken to love in the fifth as Medvedev, who was booed onto court by a section of the crowd, proved the steadier from the baseline.

Successive double faults then contributed to a second straight break and Medvedev served out the set 6-2.

Nadal began to play more offensively in the second set and twice managed to break the Medvedev serve.

The match was temporarily halted when an intruder made their way onto the court, waving a banner highlighting refugee detention and jumping down from the crowd.

He was only metres away from Medvedev but was tackled by security men and hauled out of the arena.

Medvedev – who is rapidly becoming the sport’s favourite villain – was greeted by boos as he entered the Rod Laver Arena.

He became increasingly wound up by the crowd, with appeals to the umpire to control the “idiots”, but kept a handle on his emotions a lot better than he had during his semi-final victory over Stefanos Tsitsipas, when he screamed at umpire Jaume Campistol.

His mood was not improved when he double-faulted to drop serve in the third game of the fourth set and, although he got back on terms immediately, Nadal took his seventh break point in the next game.

The victory comes as Ashleigh Barty made history by becoming the first player to win the Australian Open on home soil in 44 years.

The world number one defeated American Danielle Collins in the final, claiming the women’s singles titles.

Couple jailed for 10 years over viral video showing them dancing at Iran landmark
NHS Crisis: 27 hours for a bed
Future industrial action ‘will be even bigger’ if ministers do not act, union boss warns
Community ‘in shock’ over Nicola Bulley’s disappearance – as friends strive to protect daughters
Tesla plans to ramp up Giga Shanghai production after surge in orders, report says