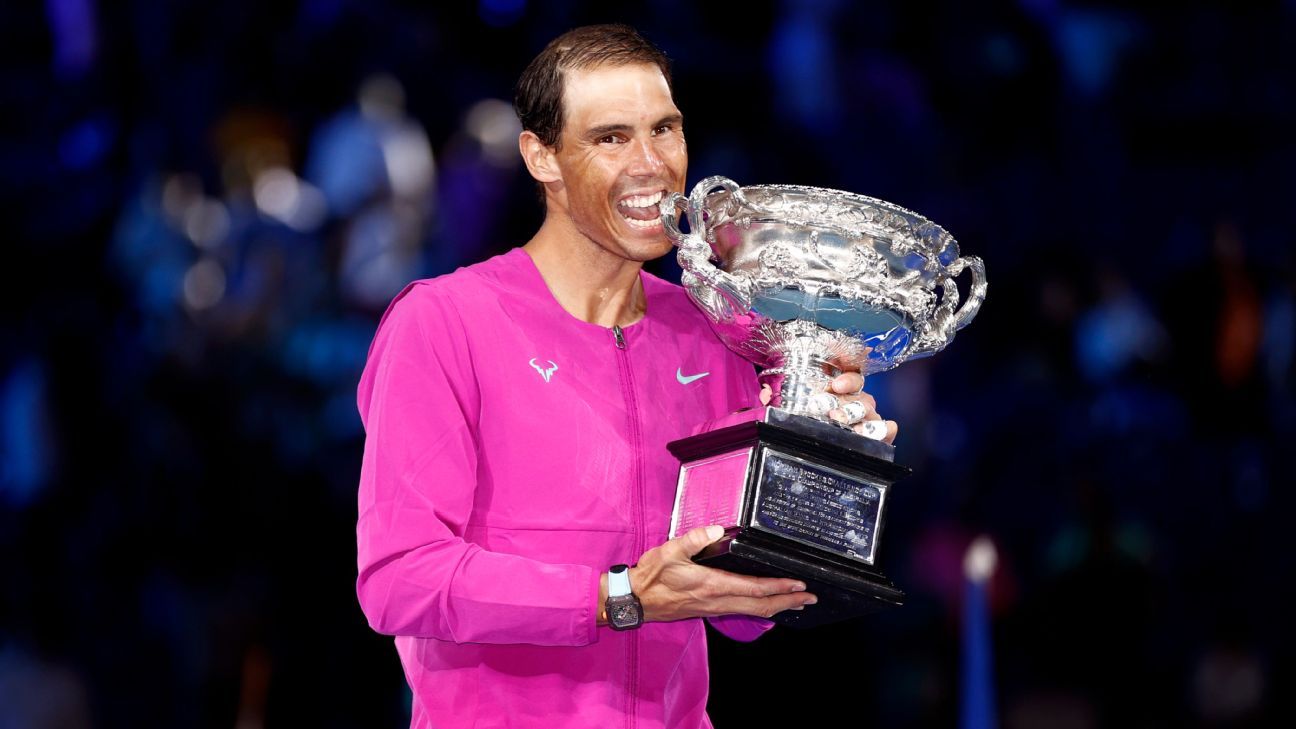 MELBOURNE, Australia — Rafael Nadal has achieved many astonishing feats on a tennis court, but none more so than what took place on Rod Laver Arena in Sunday’s breathtaking Australian Open final.

Down two sets to love and facing three break points early in the third set, Nadal’s quest for a second title at Melbourne Park, and a men’s record 21st major, had all but gone up in smoke. The Spaniard had given everything in the first two frames but fell agonizingly short on both occasions. Meanwhile, on the other side of the net, Daniil Medvedev was doing what Daniil Medvedev does — returning every single ball, from all corners of the court.

You could have easily forgiven Nadal for waving the white flag and falling gallantly in three sets to a man who has won more matches on hard courts than anyone else over the past three years. After all, just six weeks earlier, Nadal was wondering whether he would ever play tennis again. But you don’t put yourself in your sport’s greatest-of-all-time discussion without a great deal of resilience.

Nadal saved all three break points, and a fourth, for good measure, before holding serve to stay level in the third set. There was the faintest of heartbeats.

Three hours later, and with the match clock beaming 5:24 — the second-longest Slam final in history — Nadal dropped his racket, fell to his knees and let the emotion pour out, as a chorus of cheers rained down from the packed grandstands. He was a two-time Australian Open champion and had moved ahead of long-time rivals Roger Federer and Novak Djokovic with that elusive 21st Slam.

What a final 🔥🎾@AustralianOpen @DaniilMedwed @RafaelNadal !!

“I don’t know what to say. It has been one of the most emotional matches and moments of my tennis career,” Nadal said Sunday. “It’s amazing. Today, being in front of all of you with this trophy in front of me, I can’t thank you enough for all of the love and support.”

“It’s really hard to speak after losing in five and a half hours [but] you’re an amazing champion. Congrats, it was unbelievable,” Medvedev said of Nadal after the match. “I just asked him, are you tired?”

Nadal’s remarkable, record-shattering 2-6, 6-7 (5), 6-4, 6-4, 7-5 triumph saw him become the first player since 1965 to come from two sets down to win an Australian Open final. It was also just the sixth time anyone had completed such a comeback in any Slam final.

The 35-year-old has now won all four major titles twice, something only Djokovic had previously accomplished in the Open era.

In addition to all of the history and thrills in Sunday’s epic final, it has been an incredible two weeks of tennis Down Under. In case you were busy, or sleeping during most of the tournament, here’s what you might have missed from the men’s draw.

No vax, no play; the Djokovic saga rolls on

Even though he never hit a tennis ball at the Australian Open, the Djokovic saga dominated the early stages of the tournament, and the ramifications will likely continue throughout the year.

The question now is, after he was deported from Australia, when will we see him next? And when will he get a shot at his 21st Grand Slam title?

Djokovic has submitted an entry for the Dubai Championship (Feb. 21-26), but if he continues to opt against getting vaccinated, he’ll have trouble getting into France for Roland Garros (if unvaccinated, you have to show proof of having had COVID-19 in the past four months, according to recently passed French vaccine rules).

The COVID situation in the United Kingdom fluctuates, but at present, if Djokovic wants to play in Wimbledon, he’ll have to quarantine for 10 days on arrival. And for the US Open, there are only “limited exceptions” for unvaccinated travelers.

So in short, it’s not going to be straightforward for Djokovic.

Judging by the outcry at the original decision to allow Djokovic into Australia, he will be under incredible scrutiny over the coming weeks and months amid reports of a discrepancy with his COVID-19 test results from December.

No doubt these seven words aren’t what you expected to read by the conclusion of the Australian Open, but Kyrgios and great friend Thanasi Kokkinakis are Grand Slam champions after the pair rode a wave of crowd support all the way to the title in men’s doubles.

Kokkinakis, who entered the tournament having just won his first ATP title at the Adelaide International, was beaten in the first round of the singles draw, while Kyrgios drew Medvedev in the second round, coming up short in four entertaining sets. The pair then focused their attention on doubles, making a remarkable and, at times, controversial run to the title.

The crowds grew each time Kyrgios and Kokkinakis took to the court, and let’s just say it played into Kyrgios’ hands. The 26-year-old fed off the energy, something which frequently frustrated their opponents, and sometimes opponents’ coaches.

In addition to the fight that nearly broke out following Kyrgios and Kokkinakis’ second-round win over the top-seeded duo of Nikola Mektic and Mate Pavic, New Zealand’s Michael Venus labeled Kyrgios a “knob” while fellow Australian and eventual runner-up Max Purcell claimed: “Those boys are extremely disrespectful to their opponents. I’m playing with good sportsmanship and having a good time, not having the crowd yell profanity at my opponents and purposely distracting them in between points.”

Unfortunately, fans of the “Special K’s” will have to wait until the US Open in August to see them back in action, with Kyrgios confirming after their triumph that he would not be competing in the doubles at either the French Open or Wimbledon in 2022.

A pair of tennis rants for the ages

We saw two of the best in Melbourne. The first came in the quarterfinals, when Denis Shapovalov accused chair umpire Carlos Bernardes of corruption for not enforcing a time violation on Nadal.

🗣️ “You guys are all corrupt!”

Denis Shapovalov has unloaded on the chair umpire in a stunning outburst on Rod Laver arena. 😳🤯#AusOpen – Live on Channel 9 and 9Now pic.twitter.com/BUdTxut1Fc

But not to be outdone, Medvedev unleashed on umpire Jaume Campistol in his semifinal against Stefanos Tsitsipas. Medvedev was adamant Tsitsipas was receiving coaching during his match and demanding something be done about it.

The Russian has sensationally accused Tsitsipas of being coached and has GIVEN IT to the umpire over it too! 🤯🤯#AusOpen – live on Channel 9, 9Now and Stan Sport. pic.twitter.com/8Xa3qOjvnf

Medvedev apologized to Campistol after the match.

Yes, we know, we’ve been saying this for years, but the 2022 Australian Open really did highlight just how many talented youngsters there are on the ATP Tour.

We know Medvedev, 25, fell agonizingly short in the final, but just two of the eight quarterfinalists in Melbourne were over 25, and it was some of the lesser-experienced players who wowed the crowds Down Under.

The Canadian duo of Felix Auger-Aliassime (21) and Shapovalov (22) led their nation to the ATP Cup title in Sydney earlier in the month and arrived at Melbourne Park full of confidence. Auger-Aliassime and Shapovalov played fearless tennis, both reaching the last eight and coming close to knocking out eventual Australian Open finalists Medvedev and Nadal, respectively.

There was Italian 11th seed Jannik Sinner (20) who put on a clinic against Australian Alex de Minaur, but fell to Tsitsipas in the next round. But hey, Tsitsipas is hardly a veteran at just 23 years of age!

And who could forget Carlos Alcaraz? The 18-year-old Spaniard was involved in arguably the match of the tournament, playing five high-quality sets against Italian seventh seed Matteo Berrettini in blisteringly hot conditions on Rod Laver Arena.

We may be unsure about which member of the Big Three will end their career with the most Slams, but one thing is certain: The sport is in great hands when they do decide to call time.

Whether it was Alize Cornet‘s outpouring of emotion following her breakthrough major quarterfinal appearance or the sight of Evonne Goolagong Cawley presenting world No. 1 Ashleigh Barty the Daphne Akhurst Memorial Cup, there were plenty of moments over the past two weeks in Melbourne that had us all reaching for the tissues.

But perhaps none more so than when Australian icon Dylan Alcott’s glittering career came to a close. The 31-year-old quad wheelchair star had announced a few months back that the curtains were to come down on his career after this event, and on the eve of his final against Dutchman Sam Schroder, Alcott was honored in Canberra as Australian of the Year.

“I’ve been in a wheelchair my whole life. I was born with a tumor wrapped around my spinal cord that was cut out when I was only a couple of days old. I’ve known nothing but having a disability, and if I’m honest with you, I can’t tell you how much I used to hate myself. I hated being different and I didn’t want to be here anymore. I really didn’t,” he said.

“Whenever I turned on the TV, or the radio or the newspaper, I never saw anybody like me. And whenever I did, it was a road safety ad where someone drink drives, has a car accident and what’s the next scene? Someone like me in tears because their life was over.”

The reason we do what we do. Bigger than tennis ❤️💪🏼 #AusOpen pic.twitter.com/y9U67vmSVC

Alcott’s career didn’t quite have the fairytale ending, losing to Schroder 7-5, 6-0 in the decider.

“I’m really the luckiest guy in the world and I didn’t need to win today to realize that,” he said. “It’s because you, everybody watching here today, people like me with a disability, we are getting not only the recognition but we are integrated and involved in our society.”

Alcott leaves behind a remarkable legacy which goes far beyond his 15 Slams and two Paralympic gold medals. He has long been an advocate for wheelchair tennis, playing a pivotal role in matches now played on centre court at the biggest events and broadcast around the world.

Ex-Trump official reveals the moment he knew his job was at risk
Advantage, Novak Djokovic in the race to be tennis’ GOAT
‘I saw blood on the snow’: Holocaust survivor shares horror of watching Nazi death squad kill her mum
Punched, kicked and tasered: Timeline of violent arrest of Tyre Nichols
Sky reporter blocked from asking JK Rowling question