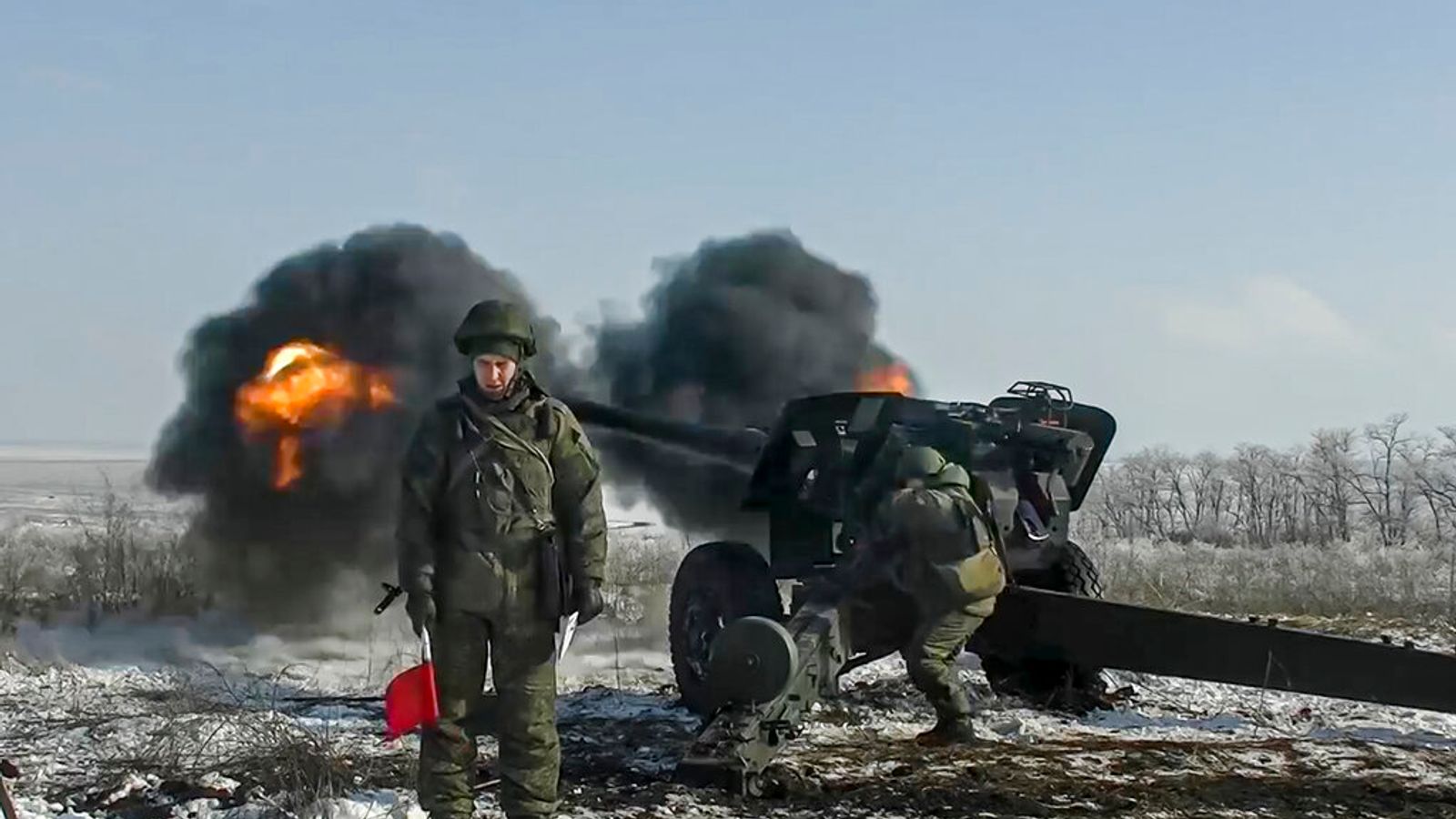 The UK is preparing to send a “clear message to the Kremlin” by deploying troops across Europe – as NATO hopes to prevent Russia from “choosing a path of bloodshed and destruction” by invading Ukraine.

Prime Minister Boris Johnson has ordered the armed forces to prepare for the major military deployment, which will strengthen Europe’s borders and ensure the UK is “able to support our NATO allies on land, at sea and in the air”.

Mr Johnson said the move will show Moscow the UK will not “tolerate their destabilising activity, and we will stand with our NATO allies in the face of Russian hostility”.

UK officials will be deployed to Brussels to finalise the details of the agreement with NATO next week.

The move comes as the Foreign Office is expected to announce tougher sanctions on Monday, which will allow the UK to target Russia‘s strategic and financial interests.

Speaking of of the UK’s plan to contribute more troops to NATO, Mr Johnson said: “This package would send a clear message to the Kremlin – we will not tolerate their destabilising activity, and we will always stand with our NATO allies in the face Russian hostility.

“If President Putin chooses a path of bloodshed and destruction, it will be a tragedy for Europe. Ukraine must be free to choose its own future.

“I have ordered our armed forces to prepare to deploy across Europe next week, ensuring we are able to support our NATO allies on land, at sea and in the air.”

Moscow has denied it is planning to invade Ukraine, while at the same time amassing some 120,000 troops near the border of its Eastern European neighbour.

Russia has also expanded its military build-up to include supplies of blood that would allow it to treat casualties – another key indicator that Moscow is preparing an invasion, sources told Reuters news agency.

Britain, the United States and other NATO allies appear increasingly concerned that hostilities are more likely than a negotiated solution to the crisis.

How many NATO troops are ready if Russia launches new invasion?

Mr Johnson will further step up his presence in the Russia-Ukraine crisis by holding a call with Mr Putin and visiting the region “in the coming days”.

The prime minister will “ramp up deterrence to avoid bloodshed” between the two former Soviet states and is determined to “accelerate diplomatic efforts” during the trip, a Downing Street spokeswoman said.

“He will reiterate the need for Russia to step back and engage diplomatically when he speaks to President Putin this week,” she added.

William Taylor, former US ambassador to Ukraine, told Sky News he expects the UK prime minister will warn Mr Putin of the potential consequences of an invasion when they speak over the phone.

Mr Taylor said: “Undoubtedly the prime minister will make it clear to President Putin, that if he makes this terrible decision to invade Ukraine… that there will be tens of thousands of Ukrainian, military and civilians, who will die.

“There will be thousands of Russian soldiers who will die. Those kinds of actions are war crimes – and I imagine that the prime minister will point out that there is no good to come from that kind of an action.”

‘He absolutely will do it’: Why Putin seems poised to attack Ukraine – after one of surest signs yet

Foreign Secretary Liz Truss and Defence Secretary Ben Wallace are also set to go to Moscow for talks with their counterparts in the coming days.

They will be asked to improve relationships with President Putin’s government and encourage de-escalation.

Explained: How Russian troops are assembled around Ukraine

Tobias Ellwood, chair of the Commons defence select committee, told Sky News the Russia-Ukraine tensions are “our Cuban missile crisis moment, and we must not blink”.

He said: “From a Russian perspective, there’s never been a better time to invade Ukraine – something Putin has been wanting to do for a long time.

“He’s enjoying this international attention. Every time a leader puts their hand up and says ‘I’m going to go to Moscow’, of course he’s going to say yes.

“He’s spinning this out. I doubt whether an invasion will take place before the Beijing Olympics, China would have made sure of that.”

Labour has accused Mr Johnson of “playing catch up with other world leaders” on deterring Russian aggression against Ukraine.

Shadow defence secretary John Healey said the government is “paralysed by a mess of its own making” domestically as the PM awaits the highly anticipated partygate report from senior civil servant Sue Gray.

Meanwhile, Ukrainian reservists, some clutching mock wooden rifles, have taken part in military exercises on the outskirts of the country’s capital Kyiv.

Ukraine has launched a new territorial defence force this year, which it wants to build up into a corps of up to 130,000 people, as nervousness over the threat of some 120,000 Russian troops near its border grows.

Among the reservists are a lawyer, an IT programmer, and a freelancer in online advertising.

While they may stand little chance against the much bigger and better-equipped professional Russian army, reservists like them could be tasked with protecting civilian sites in Kyiv amid any conflict.

It come as Russia has said it will not conduct naval exercises in international waters in the Irish Sea next week following a request from the Irish government to relocate the manoeuvres.

Ireland was notified last week that the exercises would take place around 240km (149 miles) off the south west coast within its exclusive economic zone but not its territorial waters, meaning it was permitted under international law.

Irish Foreign Minister Simon Coveney said the plans were not welcome, particularly at a time when there are tensions between Western allies and Russia over the situation in Ukraine.