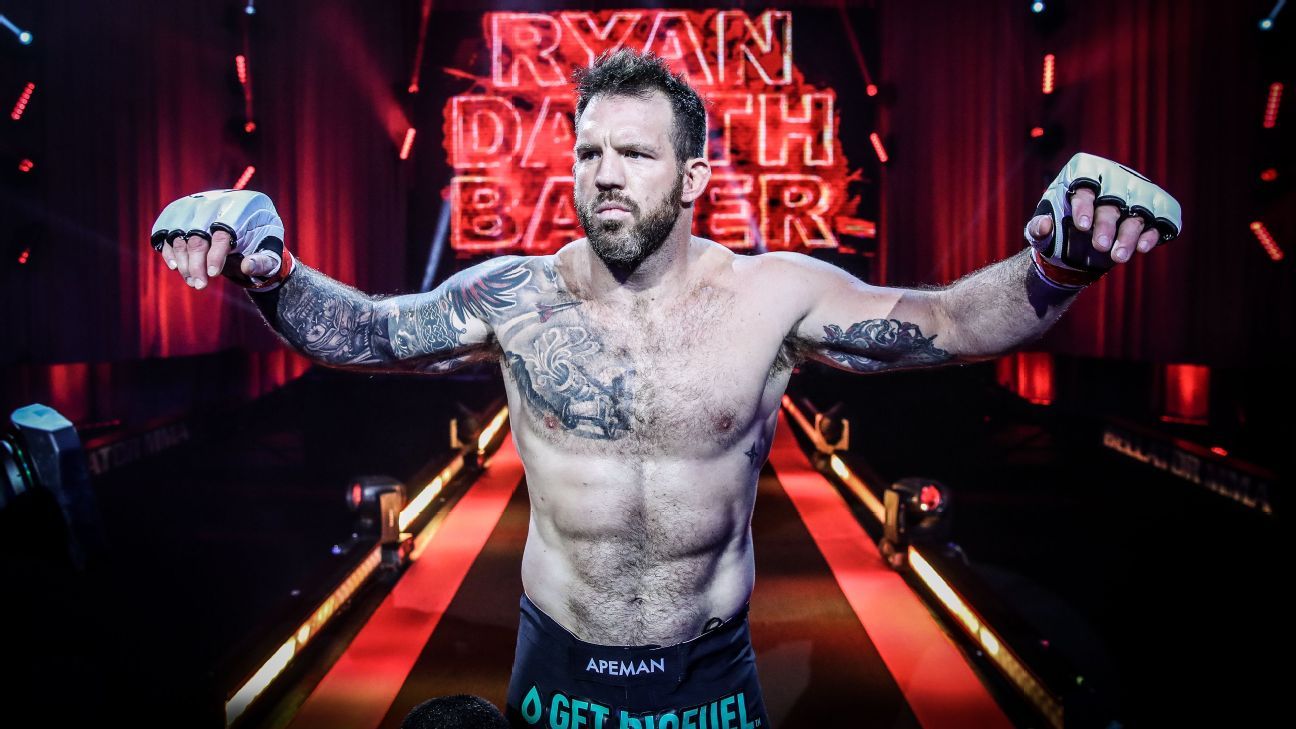 At first, Ryan Bader wondered if he belonged. By using a relative colossus and a stoic legend as springboards, he came to recognize he most definitely did.

The self-reflection by Bellator’s light heavyweight champion occurred as the promotion put a new challenge in front of him in 2018. Bader had been competing at 205 pounds for his entire career and owned victories over two former world champions at that weight during his eight years in the UFC. But now, he was being thrown in with the big boys.

Accepting an invitation to participate in the Bellator Heavyweight World Grand Prix, Bader couldn’t have gotten off to a better start. He smashed Mo Lawal in just 15 seconds, but Lawal was a fellow longtime light heavyweight also competing up a weight class. So what did that win prove about Bader’s heavyweight prospects?

The semifinals presented a more sizable test. Former NFL lineman Matt Mitrione brought a 25-pound weight advantage into the cage. But the added heft didn’t prevent Bader from taking “Meathead” down early in each round and beating him up to earn a lopsided decision filled with 10-8 rounds. “That motherf—er rode me like a pony, man,” Mitrione summarized on social media.

In the Grand Prix finale, Bader needed just 35 seconds to knock out one of the greatest heavyweights ever — Fedor Emelianenko — to become Bellator’s first champ-champ.

“That tournament — all of the fights, really, but especially the final — convinced me that I definitely belonged at heavyweight,” Bader, 38, recalled recently. “I found that I’m faster than the heavyweights, and I’m just as strong.”

Bader (28-7, 1 NC) has an opportunity to prove that again on Saturday when he defends his heavyweight title against Valentin Moldavsky (11-1) in the main event of Bellator 273. The fight is in Phoenix, Bader’s adopted hometown ever since he was a two-time All-American wrestler at Arizona State more than 15 years ago.

Saturday represents more than just a homecoming. On fight night, it will have been 876 days — nearly 2½ years — since the heavyweight champion last defended his title.

After dropping his light heavyweight title to Vadim Nemkov in 2020, Bader decided to stick at heavyweight. But Bellator had other ideas. The promotion was organizing a Light Heavyweight World Grand Prix and wanted Bader to be a part of it.

He put heavyweight on hold and went to work, hoping to regain his 205-pound belt. He made it to the semifinals but got overwhelmed in less than a minute last October by Corey Anderson, Bellator’s prized signee straight out of the UFC’s top five. Bader recognized that night, as a light heavyweight, he didn’t feel like himself anymore. This time, he decided, enough was really enough.

“I’m a heavyweight to stay,” he said. “The weight cuts to 205 pounds were getting harder, and I wasn’t performing like I needed to perform. At heavyweight, I’ve fought amazing and felt great. I’m happy to be back there.”

While Bader was off tussling with the light heavyweights, Moldavsky built a six-fight winning streak. In his last victory back in June, the 29-year-old Emelianenko protege from Ukraine captured an interim title. So Saturday’s fight, just like last weekend’s heavyweight main event in the UFC, is a title unification bout.

As the headliner on the first Bellator fight card of 2022, Bader vs. Moldavsky is one of three championship bouts booked in the year’s first half, with others in the works. Here are some questions that could be answered in the Bellator cage this weekend and beyond.

Longtime fans might remember the days when the UFC would give its big events not just a number but also a name. For instance, when Randy Couture and Vitor Belfort, who each had a victory over the other, met in 2004 for the third time, they headlined not simply UFC 49 but UFC 49: Unfinished Business.

This weekend’s event might best be named Bellator 273: How the Mighty Have Fallen. In less than a year and a half, Bader could end up going from two belts to zero. The co-main event features Benson Henderson, a former UFC lightweight champion who has lost three consecutive fights. And Darrion Caldwell, who used to be Bellator’s bantamweight champ, fights in the feature prelim in hopes of ending a two-fight skid.

Is it time for the middleweight title challenger to make a name for himself?

Early on in his MMA career, Vanderford playfully embraced the teasing when fans referred to him as “Mr. Paige VanZant,” in a nod to his more famous wife. But the 31-year-old is 11-0, with five straight wins in Bellator, and is in position to challenge Mousasi for the 185-pound title. Next month, Vanderford might earn the right to insist on being called “Champ.”

The title fight in Dublin represents a significant step up in competition. Mousasi, who is in his second reign as Bellator champ, is a 36-year-old member of the sport’s elite. His résumé includes victories over a long list of champions: Douglas Lima, Lyoto Machida, Rory MacDonald, Chris Weidman, Vitor Belfort and Dan Henderson, among others. He has also been a champ in the Strikeforce, Dream and Cage Warriors promotions. Mousasi is the man until it’s proved otherwise.

How far can the welterweight champ follow in Nurmagomedov’s untarnished footsteps?

Yaroslav Amosov vs. Michael Page, Bellator London on May 13

When he dethroned Douglas Lima last June, Amosov ran his record to 26-0. That’s the most wins for an undefeated active fighter in all of MMA, with 29-0 Khabib Nurmagomedov retired.

A 28-year-old four-time combat sambo world champion from Ukraine, Amosov faces a different type of challenge in May. “Venom” Page has a kickboxing pedigree with an unorthodox style. He attacks from all angles and will be sure to draw a roar from his hometown crowd. Will Amosov emerge with his record intact and the belt still in his possession?

How will Bellator fill the gap?

The schedule currently lists nothing between Bellator 275 in late February and Bellator London in the middle of May. Still, a spokesman for the promotion said March and April could see two to four fight cards added.

Among the possibilities being weighed:

Hey, Bellator, if you’re asking, we choose all of the above.

A Fedor finale? In Moscow?

Bellator is targeting the summer for an Emelianenko career sendoff in Moscow. No date or opponent is set, but Fedor recently mentioned one name: Ryan Bader.

Why would Bader take the rematch? When they met three years ago, he knocked out Emelianenko in barely half a minute. Unless Bader is taking flying knee lessons from Jorge Masvidal, it seems impossible for him to do better than that.

“Exactly. It’s a no-win for me,” Bader said. “But it’s a big fight. Any Fedor fight is big, and a retirement fight in Moscow would be extra special. It would draw a lot of eyeballs. So if I win this weekend, and me versus Fedor is the one Bellator really wants next, we’ll talk. If they can make me happy, I might end up deciding it’s worth it. I just have to have some upside on my side.”

Trump kicks off 2024 White House bid – and says he’s ‘more committed than ever’
Everyone’s watching Meta’s earnings report for a hint at how online ads are doing
‘Nobody is born smart’: Ex-commander of Russian mercenary group apologises for fighting in Ukraine
Three emergency workers fired over inadequate care given to Tyre Nichols
FTSE 100 reaches all-time high