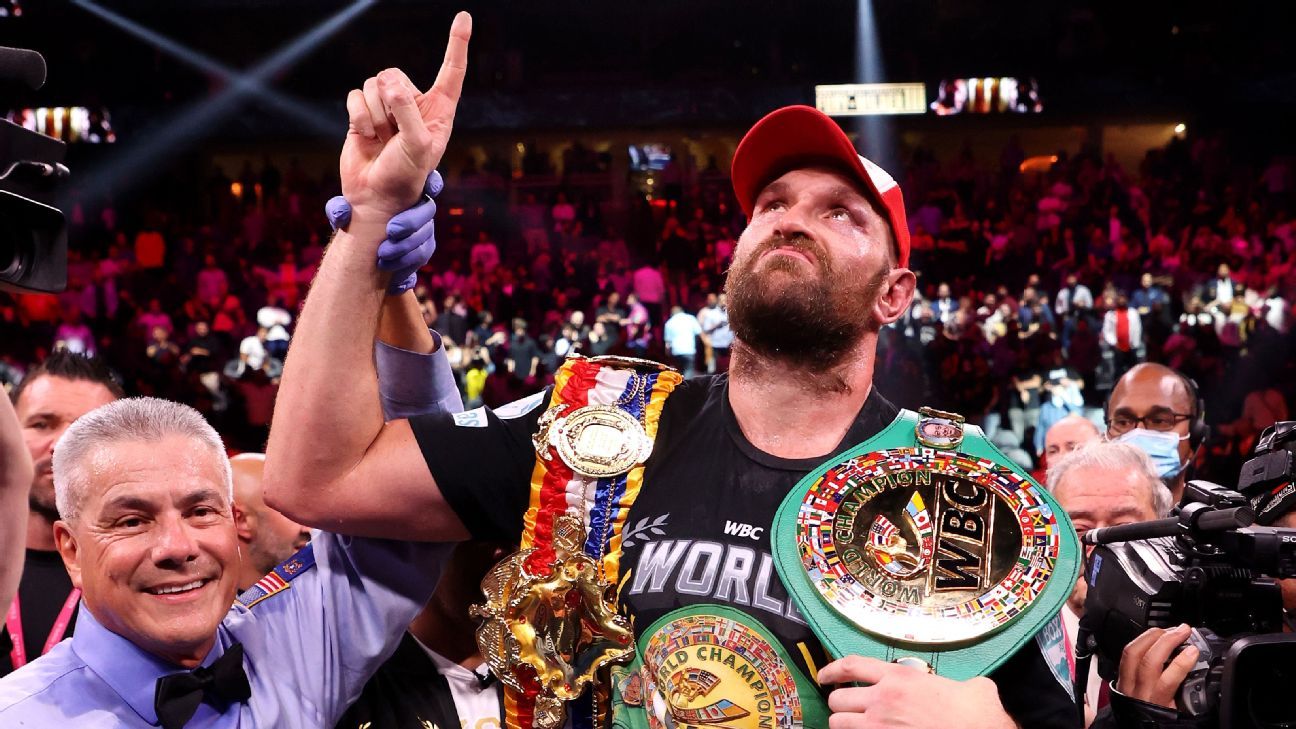 Tyson Fury and Dillian Whyte will meet in the ring after all.

There was an agreement in principle for both Whyte and Anthony Joshua to step aside and forego planned bouts with Fury and Oleksandr Usyk, respectively, in exchange for millions of dollars, but the deal fell apart after parties attempted to renegotiate at the 11th hour, sources told ESPN on Thursday.

The proposed deal would have paved the way for Fury to fight Usyk for the undisputed heavyweight championship in June in Saudi Arabia, sources said. It’s believed the $155 million site fee the Kingdom of Saudi Arabia offered last year for a fight between Fury and Joshua was in play. Money from that package would have gone to both Whyte and Joshua.

Whyte (28-2, 19 KOs) is the WBC’s mandatory challenger so he’s owed an immediate title shot against Fury. The rights to that fight will now be auctioned off at Friday’s purse bid, which has been postponed numerous times to allow time for a step-aside deal to be closed. It’s possible that bout lands in the U.K. in the spring, but it will be up to whichever promoter wins the purse bid.

There are no serious negotiations for Fury-Whyte ahead of the purse bid, per sources.

Joshua, the former unified heavyweight champion, was upset by Usyk (19-0, 13 KOs) in dominant fashion in September. The 32-year-old exercised the rematch clause in the contract, guaranteeing him an immediate return bout. The lucrative step-aside package Joshua weighed landed him a fight against the winner of Fury-Usyk in December in Saudi Arabia.

In that instance, Fury (31-0-1, 22 KOs) would have stayed busy with a tune-up fight in March in the U.K., before fighting Usyk, the former undisputed cruiserweight champion. Instead, Fury will have to get past Whyte, 34, and hope to fight the winner of Usyk-Joshua later this year for all four belts.

“I can’t wait to punch Dillian Whyte’s face right in, mate,” Fury, ESPN’s No. 1 heavyweight, said in an Instagram video Thursday. “I’m going to give him the best hiding he’s ever had in his life. Dillian Whyte, train hard, sucker, because you’re getting annihilated, bum.”

The collapse of the proposed undisputed heavyweight title fight in Saudi Arabia brings back memories of last spring, when Fury and Joshua were gearing up for an Aug. 14 clash.

The deal was in place then, but an arbitrator ruled that Fury owed Deontay Wilder a third fight. Fury, 33, scored an 11th-round KO of Wilder in October — ESPN’s fight of the year — but Joshua (24-2, 22 KOs) wasn’t remotely competitive with Usyk, spoiling plans for a Fury-Joshua fight.

Still, there’s plenty of hope Fury will vie for heavyweight supremacy later this year. He will be heavily favored to defeat Whyte, ESPN’s No. 6 heavyweight, and will be in line to fight the winner of Usyk-Joshua. The rematch is expected to land in the U.K. in the spring.