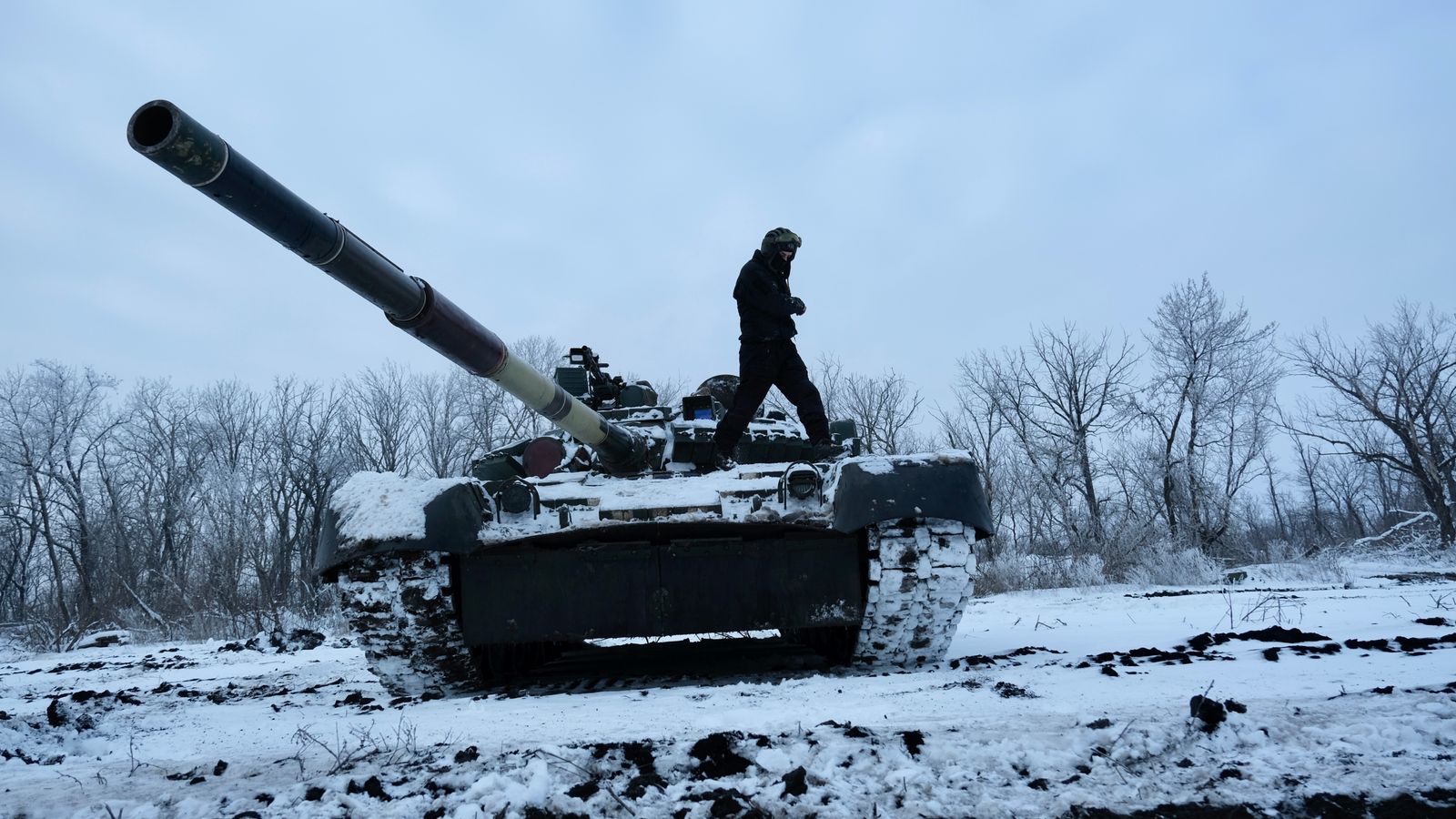 With a soldier on board, we were given directions to drive off main roads and along snow-covered tracks to a desolate spot and await further instructions.

The soldier’s telephone rang and he was given new orders, turning us around, then taking a sharp right down another track where a car was waiting for us.

As we appeared in his rear-view mirror the driver in the non-descript car moved off, and the soldier was told to follow.

“I’ve never been here before, I’ve no idea where we are headed,” he explained.

We had already been told we couldn’t film anything that could identify our location. No signposts, no distinguishing countryside, not even electricity pylons.

We were being taken to a top-secret base in the middle of nowhere – a camp inside a wood in the Donetsk region of eastern Ukraine.

Explainer: What’s going on at Russia-Ukraine border – and where is Moscow hiding its tanks and missiles?

For the first time, a news organisation had been granted permission to visit one of the most important locations to the Ukrainian military right now.

We pulled up and then trudged through the snow to what appeared to be a series of wooden shacks hidden in the forest, smoke rising from thin tin chimneys.

An armed soldier standing on the inside of a locked and strangely intricate metal garden gate told us to wait and then radioed inside.

A few minutes later we were allowed in to be greeted by senior officers.

Inside the camp, soldiers were drawing up into units and being given instructions by officers.

We were then escorted through the base to an area where a series of sloping bunkers, covered in branches of cut down trees, dipped into the ground.

Read more: 8,500 US troops could be deployed to region

Peeking out of the branches was the enormous barrel of a tank.

This base, which stretches for miles through the forest, is the Ukrainian military’s best hope of defence against a Russian invasion: a tank battalion on standby to fight.

Soon after our arrival, soldiers started removing the branches and the tank engines roared into life.

They are T80 B1V tanks, powered by gas turbine engines that deafeningly sound like jet engines.

Ukraine preparing for all possibilities

One by one they were gunned out of their snow-covered bunkers and, in a cacophony of sound and spraying mud, made their way to an open plain.

As the tension continues to grow over a potential Russian invasion, the tank crews are undergoing intense training and inspection.

The tanks are usually concealed in miles of snowy forest.

The crews here are working on evasion tactics knowing that they’ll likely be outgunned by the Russian forces’ more sophisticated equipment, and more importantly its sheer numbers.

Eyewitness: The Britons fighting in the trenches against Russians after starting new lives

These tanks, all modified in the city of Kharkiv here in the east, are widely regarded as better than the ones used by the Russians. And the Ukrainian military has been taking delivery of as many as they can get since the separatist uprising in Donetsk and the Russian annexation of Crimea in 2014.

Maxim Nazarenko, one of the Tank Troop Commanders here, told me they’re preparing for all possibilities.

He told me they’re aware of the realities of facing up to the Russian Army, but that they’re ready, and determined to “give them a proper answer” if their territory is compromised.

“There are always concerns, even in times when there is no war. And, of course, there are concerns now as well. But in order to reduce it, we fulfil different standards, prepare, and improve our skills to fight the enemy.”

We watch on as the tanks carve up the earth, manoeuvring from their hideouts through mud, ice and snow. It’s pretty much frozen here already – both armies could easily find themselves easily bogged down.

Experts don’t believe that if an invasion takes place, it will be an actual World War II type scenario, with tank battles in open plains.

But in the current uncertainty of what may happen absolutely nothing can be ruled out.