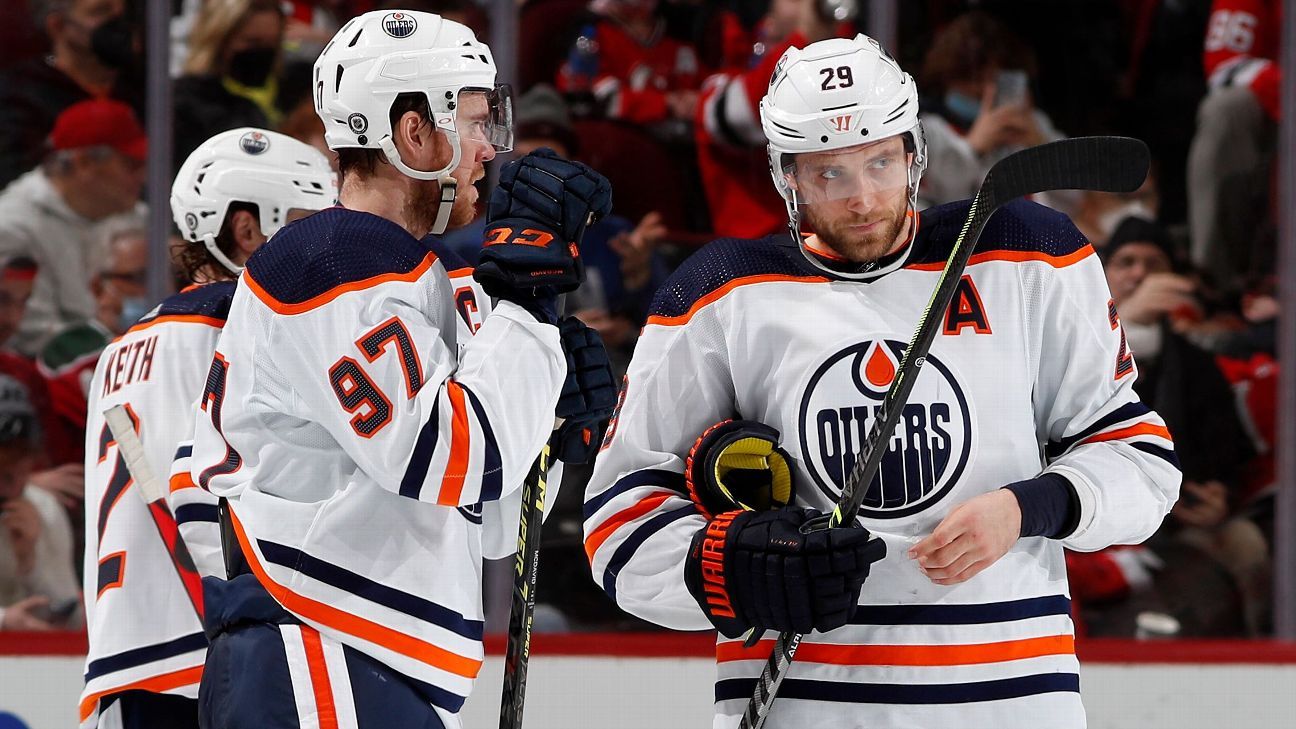 With the All-Star Game approaching, and many teams having hit the 41-game mark of the 2021-22 NHL season, it’s a great time to check in on the playoff races, potential trade candidates and award and scoring title candidates.

We asked our NHL analysts for their top predictions for the remainder of the season, and they did not disappoint: We have cases for the Oilers making (and missing) the playoffs, that a goalie could win the Hart Trophy as league MVP, that a team that was supposed to be rebuilding will swing a deal for one of the top defensemen available, and much more.

Here is how our analysts see the rest of the regular season playing out:

You read that right — I didn’t say Vezina Trophy, I said Hart — as in the top individual trophy any NHL player can win at the NHL awards … goalie, goal scorer or otherwise.

Sure, Alex Ovechkin is putting up wild numbers, Nazem Kadri is having a remarkable season in Colorado and the Oilers have two players scoring at a furious pace. There’s also the fact that a goaltender doesn’t often win the Hart; it has happened only eight times in league history, the last time being Carey Price in 2015.

To me, it’s all about the definition of the award: This award is given “to the player adjudged to be the most valuable to his team.” This season, Shesterkin embodies that definition. He has been the backbone of the Rangers’ meteoric rise. Before the season started, the conversation surrounding the Rangers was about battling for a playoff spot — who could have dreamed of battling for the league lead in points? Shesterkin has been incredibly clutch when the team has needed it, and perhaps the biggest reason this team is finding itself at the top of the tables. Individually, he’s first in the league in save percentage, at .936, and second in goals-against average, at 2.08

If the Rangers make the playoffs and Shesterkin continues his level of play, I can see him hoisting some hardware after April. — Arda Ocal, NHL host

Is any player more valuable to the league’s best first-half team than Huberdeau?

Florida has gone without Aleksander Barkov for multiple stretches, its goaltending has been rocky at times, injuries and illnesses have decimated the Panthers’ ranks and still, Huberdeau has kept his team atop the standings. His 58 points are 21 ahead of second place on the team, and he has been an all-situations player. By April, he’ll be more worthy of MVP honors than anyone. — Kristen Shilton, NHL writer/reporter

Nazem Kadri will elbow his way into the Selke Trophy conversation

Inspired by Greg Wyshynski’s recent story on the Avalanche center in which Kadri encourages a push for his candidacy as best defensive forward in the league (“You know what? Start pitching it, man. Get that out there.”)

Historically on the fringe of Selke consideration, the Toronto Maple Leafs‘ best shutdown forward for years is performing in similar 200-foot fashion with his current club in Colorado. Kadri’s personal stats — 56.62% Corsi for percentage, 54.34% high-danger Corsi for percentage, 15.1 goals above replacement, 2.7 wins above replacement, per Evolving Hockey and Natural Stat Trick — only quantifies what we’re watching him do on the ice. He plays nearly 19 minutes per game, takes a significant number of faceoffs, wins most of them, and pitches in on the penalty kill. Plus, this being a contract year, this uncompromisingly fierce competitor will leave nothing on the table through the postseason. Oh, and there are the 51 points through 36 games to consider.

So set aside Aleksander Barkov, Sean Couturier (currently on long-term IR) and Patrice Bergeron; there’s another defensive forward looking for increased appreciation from the Professional Hockey Writers’ Association this season. I’m not saying Kadri’s going to win the thing, but he’s certainly earned a spot in the discussion. — Victoria Matiash, NHL analyst

The Edmonton Oilers make the playoffs … or will they?

My prediction is that the Oilers will break out of this slump and make the playoffs. The team has gone through some tough adversity and will use it as motivation heading into the second half of the season. I also see them being active at the deadline to add some players, and that will light a fire under this group and help them down the stretch. — Ryan Callahan, NHL analyst

This shouldn’t be a bold prediction. But … we’ve all seen the Oilers lately. And it has been ugly. However, desperation is a powerful motivator, and there’s a half season left for Edmonton to find itself. I still think it can get there, and do so without trading away anything huge by the March deadline. — Shilton

I predict that Edmonton’s lack of cap space won’t allow them to add much at the trade deadline. Goaltending proves fatal for them, and they can’t catch the Kings for the No. 3 spot in the Pacific, while the Predators and Jets take the two wild cards in the West.

On the plus side, I also predict that Connor McDavid and Leon Draisaitl will finish 1-2 in the scoring race. — Brian Boucher, NHL analyst

The Kings are one of the league’s surprise contenders, not only because they weren’t expected to reside in a playoff seed at this point in the season, but because of how they’ve done so: Five of their top six scorers are over the age of 28. The much-heralded collection of prospects the Kings had amassed is still percolating, but they should have a better sense of who’s in their future and who isn’t. In other words, it’s time for GM Rob Blake and his brain trust to start flipping those prospects for established NHL talent.

In this case, that talent is Chychrun, the Arizona Coyotes defenseman who needs a new home as badly as … well, as badly as the Coyotes do, one supposes. He’s the kind of left-side defenseman they lack, and a puck-mover at that. He wouldn’t be temporary help, but a building block for them going forward. The Kings have the first-rounder and the prospects it’ll take to snag him from Arizona.

The two most recent Stanley Cup champions, the Tampa Bay Lightning and St. Louis Blues, will add to their team before a playoff push

If you listen to both general managers (Julien BriseBois for Tampa Bay, Doug Armstrong for St. Louis) speak publicly, they’ll both claim they have no cap space and can’t pull off anything.

Hosts Linda Cohn and Emily Kaplan bring their hockey expertise and passion for the sport, discussing the latest news around the league as well as interviewing the biggest names both on and off the ice. Listen here »

We’ve heard that before. Both BriseBois and Armstrong have proved throughout their careers they’re not afraid to make a bold move, and they can be creative with salary-cap gymnastics.

If St. Louis is really going to make a splash, Armstrong could deal his second-leading scorer, Vladimir Tarasenko. Though Tarasenko has been a good soldier following a trade request during the 2021 Stanley Cup Final — and eased any lingering questions about how he would recover from his third shoulder surgery, scoring 38 points in 37 games — I still get the sense both the player and the team believe a fresh start is the best path forward. — Emily Kaplan, NHL writer/reporter

This will be an active trade deadline, with big names involved

The second half of this season has a schedule so condensed and — dare we say — unprecedented in scale, general managers might have no choice but to be active on the trade market. It’s entirely likely there will be an uptick in injuries or even subpar play that forces teams to go in unexpected directions. That could create more chaos than we’re used to seeing on the acquisitions front. — Shilton

I won’t name names here, but I predict three specific trades take place this season: the Oilers will trade for a goalie, the Panthers will add a top-four defenseman and the Rangers will make an addition to their top-six forward group. — Ray Ferraro, NHL analyst

I predict that Philadelphia Flyers captain Claude Giroux will be traded to one of the top three teams in the Central (Colorado, St. Louis or Minnesota, by points percentage) before the deadline. — Boucher

The East is pretty much set. All the teams currently in the playoff picture will be the teams to make it this season, with some jockeying for seeds yet to be determined. Here’s how I see it playing out:

Atlantic: Panthers, Lightning, Bruins as the top three. Boston will ride the wave of a rejuvenated Tuukka Rask and newfound balanced scoring.

Metro: Hurricanes, Penguins, Rangers in the top spots. Pittsburgh is for real, and it will benefit by finally playing with a full lineup.

This season will include 103 exclusive regular-season games across ESPN, ESPN+, Hulu and ABC, and more than 1,000 out-of-market games will be available on ESPN+.
• How to watch
• Subscribe to ESPN+
• Stream the NHL on ESPN

In the West, the Central will get five teams in, while the Pacific will get three.

Central: Avalanche, Blues, Wild in the top spots. Colorado hits full stride in the second half, winning the division and the West.

Pacific: Golden Knights, Flames, Kings go 1-2-3. With games in hand, Calgary gets the No. 2 seed, and L.A. holds off late charging Edmonton and San Jose for third in Pacific.

Wild cards: Predators and Jets. Nashville fights hard with Minnesota for the top three in the Central but falls short, while Winnipeg uses its games in hand to get the final wild-card spot. Goaltender Connor Hellebuyck and left wing Kyle Connor lead the Jets in. — Boucher

Who wins the goal-scoring title?

I’ve got Auston Matthews winning the goal-scoring title, with 59. But, I also predict that Alex Ovechkin will stay on his pace and score more than 50 for the ninth time in his career. — Boucher

My pick for the Rocket Richard trophy as the league’s goal-scoring champ is Alex Ovechkin. — Ferraro

Make no mistake, Alex Ovechkin will stay hot in the second half. And he has been pacing — or close to pacing — all league scorers for weeks. But the past month especially has produced some serious competition in the goal-scoring race. Reigning Richard winner Matthews is picking up steam, Chris Kreider remains excellent, and there are some up-and-comers in the Western Conference nipping at Ovechkin’s heels, too.

It’ll be exciting, but I don’t think Ovi wins the crown this season. — Shilton

If the Canucks make the playoffs, Boudreau will be the coach of the year, full stop. He previously won the award in 2007-08 for coaching the Washington Capitals to the postseason in 61 games; he’ll have coached 57 of them with Vancouver by the end of the season. The broadcasters who vote on this award adore the man.

So let’s get bold: The Canucks rally for a playoff spot and Bruce Boudreau gets all the credit for working his regular-season magic. And then they lose in the first round in a Game 7, which, given Boudreau’s history, is not that bold of a prediction. — Wyshynski

Menacing charge for Bengals RB Mixon dismissed
‘Can’t wait for this guy to die’: Reporter reveals some GOP sentiment towards Trump
A vital EV battery nickel product will be made in the US for the first time
Sources: Chelsea sign Fernandez for record fee
Apple sales drop 5% in largest quarterly revenue decline since 2016