The Ukrainian soldiers speak in whispers as they trudge through the snow and mud of their trenches, keeping low as they pass the most exposed sections, past signs warning of sniper activity.

Nothing has changed here for years.

The daily exchanges with Russian-backed separatists and, what the Ukrainians are certain of, professional Russian soldiers, goes on and on.

Their biggest fear is Russian drones equipped with thermal imaging cameras. They can hear them above – when the sound stops, the mortars and grenades begin.

The brigade we are with guards the southern section of the Ukrainian military’s frontline with the separatists in the east of the country, near the town of Pavlopil.

Amongst their ranks are two professionally contracted soldiers, foreign fighters who’ve joined up.

Unusually, Johnny Wood and Sean Pinner are from England. Both say they have started new lives here – which is why they’re fighting.

Sean Pinner was working in waste management in England when he decided he couldn’t do the 16-hour days and long commutes on the M25 any longer.

So, he says he decided to change his life, and with his military background in mind, joined the Ukrainian army.

“I had a skill set with the Royal Anglian Regiment in the British Army for nine years, and the laws changed here. They allowed foreigners to join the military, and once that was established, I could give three years here, and then get my permanent residency or citizenship.”

Sean was promoted to section commander of his unit just six months after joining up.

It took him a while to earn the trust of his fellow soldiers, but he now considers himself one of them – more importantly perhaps, they consider him one of theirs.

“The first year was a bit sketchy because they don’t know what to make of it, it’s very, this is new, why would Brits want to come out here and do this? But now I’m three years with the marines,” he explained.

This is Sean’s fourth tour of duty in Ukraine. He speaks a bit of Russian and has married a Ukrainian. Their family home is just 15km (nine miles) from the frontline – he told me he can hear the shelling from his front room when he’s at home.

“My home city is Mariupol, so for all intents and purposes I am defending my adopted city now, and my family.”

I asked him what that defence might that look like if a full-scale Russian invasion were to happen.

Read more: 8,500 US troops could be deployed to region

And he, like many Ukrainian soldiers I have met, is realistic but defiant.

“All I know is that the guys are well positioned, dug in, and will fight.

“We will all fight, because these guys are defending their homes, most of the guys you speak to – really – are looking to the West, not to Russia, to move forward with their lives.

“We haven’t got air superiority, we don’t have a naval fleet – very strong naval fleet – but Ukrainians fight, so we’ll give them a bloody nose that’s for sure.”

Sean’s contract comes to an end in December, but he’s got no plans to move back to England. He says he wants to retire from the military and live in Ukraine, perhaps moving into humanitarian work.

“It’s taken me a long time to integrate here, so the guys know I’m not a war tourist or war junkie, and I am with an organised unit, I’m with the government… I’ve integrated, so they know I’m not just sitting around and going to go home at the end of it.” 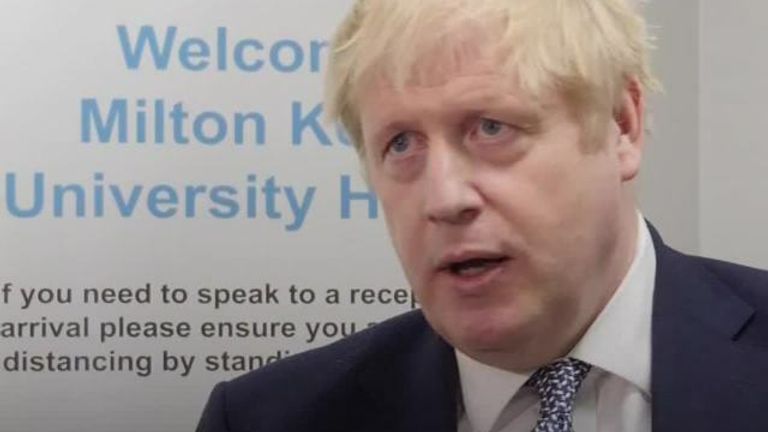 Johnny Wood, 28, is on his third rotation. He and Sean have become good friends, often visiting each other at their frontline positions.

Like his fellow Brit, he owns a house in Ukraine and has plans to start a family.

Johnny says some people think he’s crazy for joining up, and when they argue he shouldn’t be here he does sometimes see their point – but ultimately, he points out, his life is here now.

“That’s a true argument from their side, but I’m here, my fiancee is Ukrainian, I’ve got a house in Ukraine, I’m building a family.

“There will always be that person who says I shouldn’t be here, but at the end of the day if I’m not here, like my government’s not here, so like this is the best I can do by doing what my government can’t do.”

The Ukrainian army has improved a lot since 2014, but even so it is infinitely outgunned by the Russian army.

“European governments need to give Ukraine more in terms of the capacity to be able to defend themselves,” Johnny told me when I asked him what it might be like if Russia were to invade.

“I don’t think we need to send British troops or American troops, all the West needs to do is support Ukraine politically.

“Like give them as much political support as we are doing, like ramp it up and just give them the weapons they need to defend themselves and defend their country.”

To the south of these frozen trenches, is the town of Shirokino on the shores of the Sea of Azov.

The international community is warning that an invasion would lead to thousands of deaths and whole communities destroyed. Prime Minister Boris Johnson has said it could resemble the Chechen Wars.

Shirokino couldn’t be a better example of what could happen here in Ukraine.

It is destroyed and deserted, abandoned by its inhabitants in 2015 as the fighting and shelling intensified, making life impossible.

A once prosperous town now an eerie wreck of destroyed buildings, silent but for the sound of wind blowing through broken windows and twisted metal creaking and whining in the wind.

Its apocalyptic presence is a reminder of how near we are to the edge of disaster.