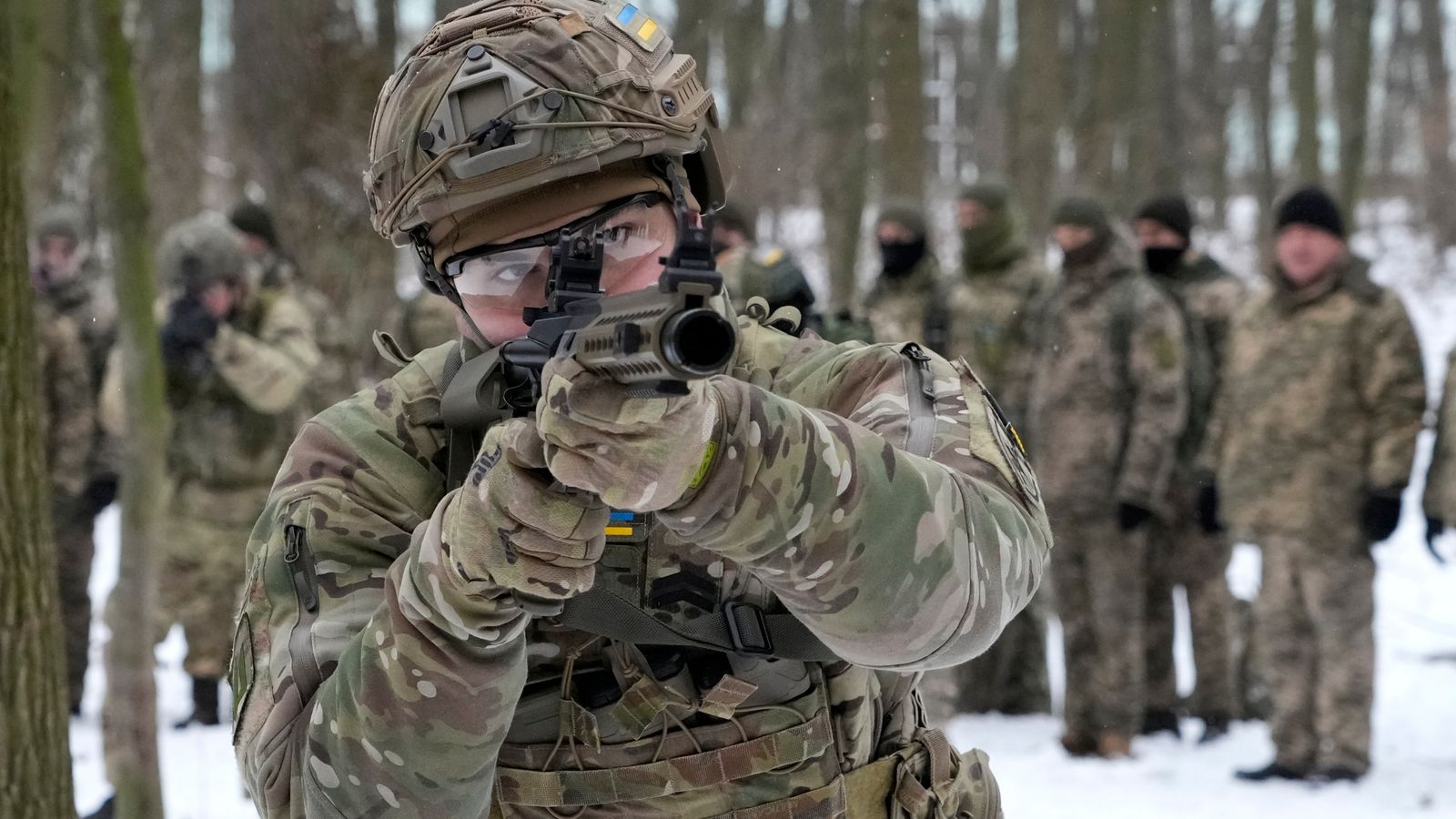 Boris Johnson has warned that “gloomy” intelligence suggested Russia was planning a lightning raid on Ukraine’s capital Kyiv as fears grow of an invasion – with NATO sending additional ships and jets to its deployments in eastern Europe.

The alliance said it could also add additional combat units in response to Russia’s military build-up on Ukraine’s border.

NATO has so far based about 4,000 troops in multinational battalions in Estonia, Lithuania, Latvia and Poland, backed by tanks, air defences and intelligence and surveillance units.

Russia has massed around 100,000 troops near Ukraine’s border, demanding that NATO promise it will never allow Ukraine to join and that other actions, such as stationing alliance troops in former Soviet bloc countries, be curtailed. Moscow denies it is planning an invasion.

Mr Johnson said: “The intelligence is very clear that there are 60 Russian battle groups on the borders of Ukraine, the plan for a lightning war that could take out Kyiv is one that everybody can see.

“We need to make it very clear to the Kremlin, to Russia, that that would be a disastrous step.”

“From a Russian perspective” an invasion is “going to be a painful, violent and bloody business”, the prime minister went on.

More on Republic Of Ireland

“I think it’s very important that people in Russia understand that this could be a new Chechnya.”

The PM said he had visited Ukraine and knew the people of the country, adding: “My judgement is that they will fight.”

Asked if he believed an invasion was imminent, the prime minister said: “I’ve got to tell you that I think the intelligence is pretty gloomy at this point.

“There is certainly a very, very large array of Russian forces and we have to take the necessary steps.

“I don’t think it’s by any means inevitable now, I think that sense can still prevail.”

It comes as the UK announced it is withdrawing some embassy staff and their family members from Ukraine in response to the “growing threat” from Russia.

Sky News understands the workers being pulled out are non-essential and the embassy remains fully operational.

The US has ordered the family members of all American embassy staff to leave Ukraine, while Ireland has told Moscow that planned war games off its coast in the Atlantic are “not welcome”.

Meanwhile, NATO is putting forces on standby and sending additional ships and fighter jets to its deployments in eastern Europe.

Denmark is sending a frigate to the Baltic Sea and is set to deploy four F-16 fighter jets to Lithuania in support of NATO’s long-standing air-policing mission in the region.

Spain is sending ships to join NATO naval forces, France has expressed its readiness to send troops to Romania under NATO command, and the Netherlands is sending two F-35 fighter aircraft to Bulgaria from April to support NATO’s air-policing activities in the region.

The United States has said it is considering increasing its military presence in eastern Europe.

NATO Secretary General Jens Stoltenberg said the alliance is “hoping for the best” but added it has to be “prepared for the worst”. He insisted NATO was not threatening Russia and urged Moscow to continue dialogue.

He said: “I welcome allies contributing additional forces to NATO. NATO will continue to take all necessary measures to protect and defend all allies, including by reinforcing the eastern part of the alliance.

“We will always respond to any deterioration of our security environment, including through strengthening our collective defence.”

It comes as Ireland’s foreign minister, Simon Coveney, said planned Russian naval exercises in the international waters off Ireland are “not welcome”.

Russia said late last week its navy would stage a sweeping set of exercises involving all its fleets from the Pacific to the Atlantic.

It would be the latest show of strength in a surge of military activity during a standoff with the West.

Mr Coveney said on Monday: “We don’t have a power to prevent this happening but certainly I have made it clear to the Russian ambassador in Ireland that this is not welcome. This isn’t a time to increase military activity and tension.”

US officials stressed the Kyiv embassy will remain open and that the announcement does not constitute an evacuation.

The decision had been under consideration for some time and does not reflect an easing of US support for Ukraine, the officials added.

But Ukraine’s foreign affairs spokesperson Oleg Nikolenko said the US decision was “premature” and one of “excessive caution”.

We have taken note of @StateDept’s decision re departure of family members of @USEmbassyKyiv staff. While we respect right of foreign nations to ensure safety & security of their diplomatic missions, we believe such a step to be a premature one & an instance of excessive caution.

Tensions over Russia’s military build-up on the Ukraine border were not eased during talks between US Secretary of State Antony Blinken and Russian Foreign Minister Sergei Lavrov on Friday.

In a statement, the State Department noted recent reports that Russia was planning significant military action against Ukraine.

However, the Russian Foreign Ministry has accused NATO countries of escalating tensions around Ukraine with disinformation.