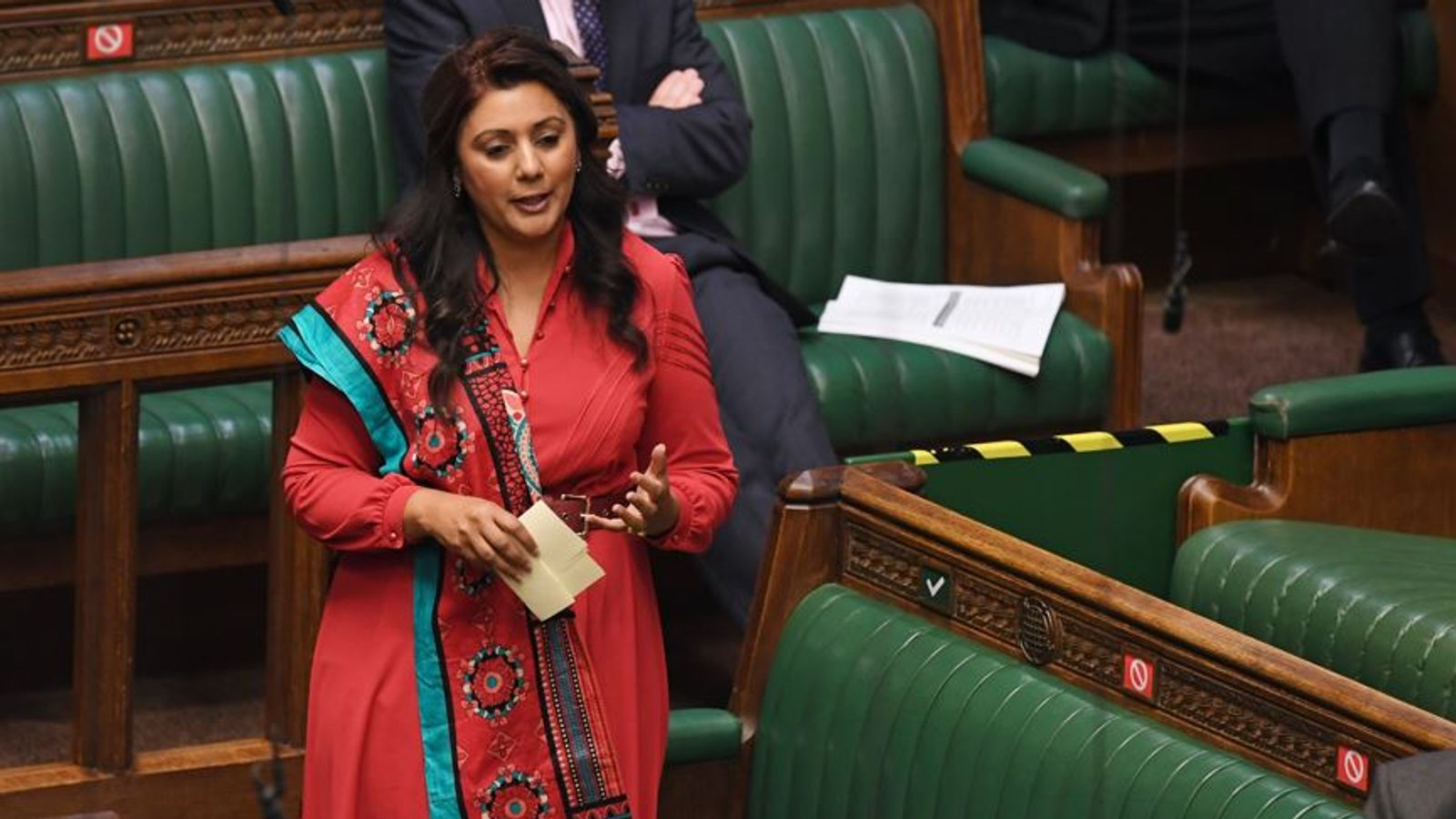 Boris Johnson met Tory MP Nusrat Ghani in 2020 following her claim she was sacked over her “Muslimness” – and “invited” her to make a formal complaint, Number 10 has said.

The prime minister’s official spokesman said Mr Johnson held a meeting with Ms Ghani after she claimed a Tory whip told her her faith was “raised as an issue” at Downing Street after she was sacked as a junior transport minister in a February 2020 re-shuffle.

“After being made aware of these extremely serious claims, the prime minister met with Nusrat Ghani to discuss them,” the spokesman said.

“He then wrote to her expressing his serious concern and inviting her to begin a formal complaint process. She did not subsequently do so.

“The Conservative Party does not tolerate prejudice or discrimination of any kind.”

Mr Johnson is understood to have met Ms Ghani in July 2020 and wrote a letter to her after that suggesting she started a formal complaint process.

Chief Whip Mark Spencer has revealed he is the whip in question but said the accusations are “completely false”.

Ms Ghani, MP for Wealden in East Sussex, said the whip told her “Muslim woman minister status was making colleagues feel uncomfortable” and it made her consider quitting as an MP.

She added that they told her there were concerns “that I wasn’t loyal to the party as I didn’t do enough to defend the party against Islamophobia allegations”.

And she said she was warned if she kept raising the claims, her career and reputation would be “destroyed”.

Ms Ghani’s accusation comes as the tactic of whips is called into question following allegations by some Conservative MPs they have been blackmailed for failing to toe the party line, or even considering it.

The job of whips is to make sure MPs vote on parliamentary business and vote in the way their party wants.


Mark Spencer says he is whip in question

In Mr Spencer’s statement, he said: “To ensure other whips are not drawn into this matter, I am identifying myself as the person Nusrat Ghani MP has made claims about this evening.

“These accusations are completely false and I consider them to be defamatory. I have never used those words attributed to me.

“It is disappointing that when this issue was raised before Ms Ghani declined to refer the matter to the Conservative Party for a formal investigation.

“I provided evidence to the Singh Investigation into Islamophobia which concluded that there was no credible basis for the claims to be included in the report.”

Defected MP says he was ‘threatened’ by whips

Deputy PM Dominic Raab said Ms Ghani could still make a formal complaint, which would allow for an investigation into the matter.

He told Sky News’ Trevor Phillips on Sunday: “It is incredibly serious, let me be clear at the outset, we have absolutely zero tolerance for any discrimination, any Islamophobia in the Conservative Party.”

Mr Raab added it was “very unusual” Mr Spencer has revealed he is the person accused but said he “categorically denied” it.

Ms Ghani told The Sunday Times her experience was “like being punched in the stomach. I felt humiliated and powerless”.

She said she was later warned that continuing to raise the issue would leave her “ostracised by colleagues” with her career and reputation “destroyed”.

“When I challenged whether this was in any way acceptable and made clear there was little I could do about my identity, I had to listen to a monologue on how hard it was to define when people are being racist and that the party doesn’t have a problem and I needed to do more to defend it,” she said.

“It was very clear to me that the whips and No 10 were holding me to a higher threshold of loyalty than others because of my background and faith.”

‘I’m expecting death any time’: How South Africa’s scheduled power cuts put lives on the line
Treatment of Vinicius is only encouraging racist abuse
Government responds to Liz Truss claim she was not given ‘realistic chance’ to cut taxes
Chinese spy balloon flying over US airspace, says Pentagon
China threatens ‘further actions’ over US downing of suspected spy balloon