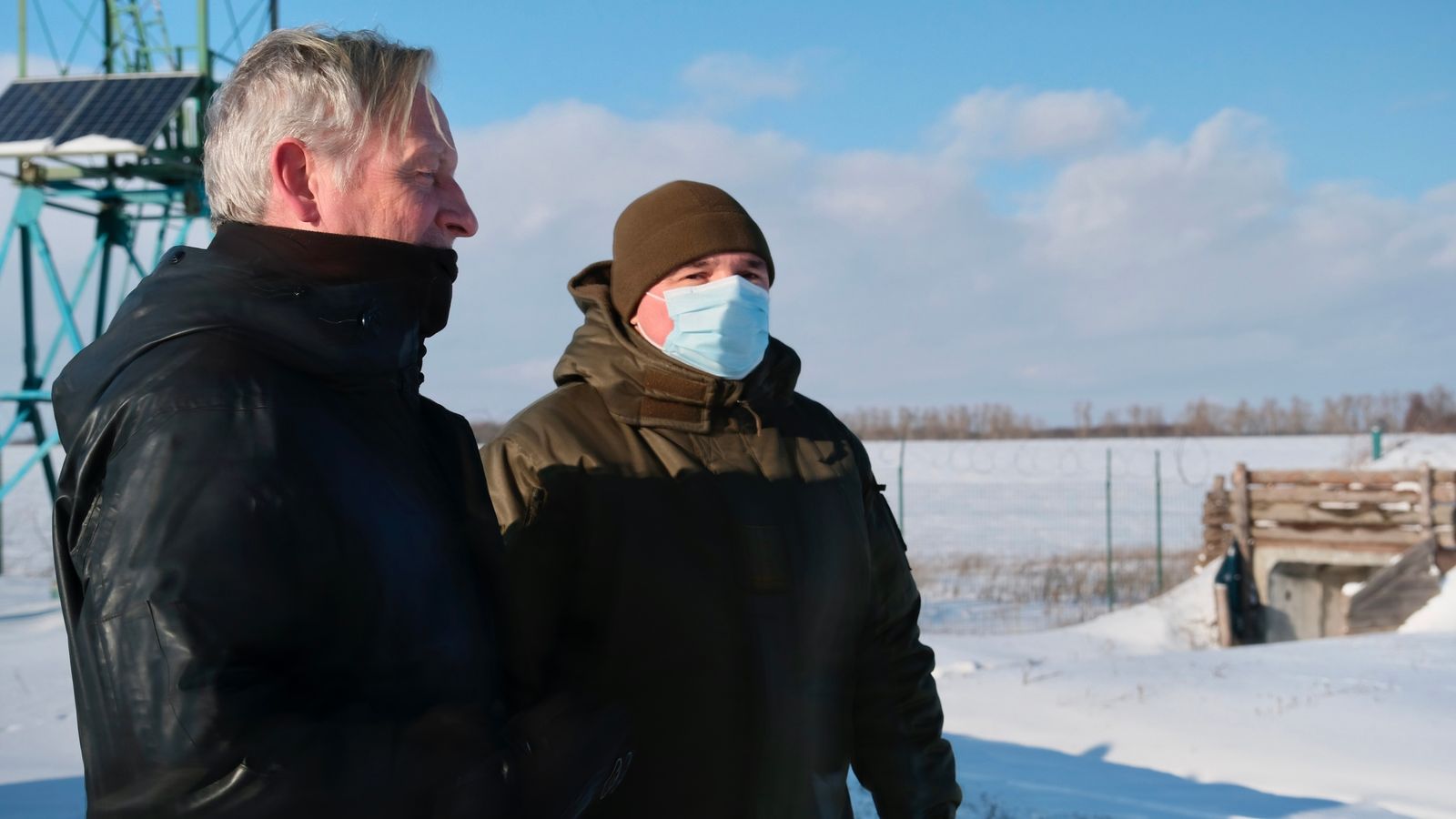 It doesn’t matter that I lived in Russia and experienced its winters for a number of years.

It doesn’t matter that I reported on the wintry months of the Ukrainian separatist uprising in 2014 into 2015. Because each time one comes back, the weather is as horrendous and painful as ever.

Looking out across miles of frozen fields at the border fence between the two countries, I could feel my breath freeze, my fingers and toes turn blue, and cheeks red, whiplashed by a freezing wind and drifting snow.

They say the Russian army prefers to fight when the ground is frozen, and their tanks and vehicles can move quickly – it seems to me the conditions are now perfect and at the same time I can think of nothing worse than battling these elements while also fighting, but I’m not a soldier of course.

This frozen border between Ukraine and Russia is over a thousand miles long. It is divided by trenches and, in places, thin metal fences and berm.

Here in the Kharkiv region, the border is more than 173 miles long; only 50 miles of it is separated by the fence, the rest open farmland.

A few miles away from us, across freezing fields and drifting snow, thousands of Russian soldiers, tanks and missile systems are waiting for orders.

We can’t see them, of course, but the State Border Guard of Ukraine is all too aware that, in the distance, they’re there.

They tell us they continue to monitor Russian movements towards them but haven’t seen a dramatic increase in activity.

It is, however, more tense than usual as the fears of an invasion or even an incursion grow.

On the face of it, Lieutenant Colonel Yuri Trubachov seems fairly unfazed by it all as he guides me through their border positions.

He points towards a tower on a hill, set 50 meters back from the fence proper. He told me that they have cameras on the tower, allowing them to monitor movements 24 hours a day.

“If we see any threat of an armed attack on Ukrainian territory, our units will take up defensive positions in the trenches,” he explained.

“We have special reserves prepared for this; also this territory is equipped with surveillance cameras so we will see early signs of an attack and can warn the armed forces, who will send defensive support.”

Few people come outside – especially not in winter

This part of the fence between the two countries runs alongside a village. Zvyazok is a sleepy, snow-covered hamlet that butts up against the border fence.

Few people come outside – especially not in the winter – but we could see the occasional bicycle, car, children’s swings, and hear the ever-present sound of barking dogs alerted to strangers in town.

As we filmed in the village and walked towards the border fence, I was surprised to see a moving vehicle, and suddenly realised it was on the other side.

It was a Russian border patrol passing by.

The Ukrainians say they’re doing the same job as them and they see them often. The difference now is that their proximity of just a few metres seems so much more poignant, given the rising tensions between the two sides.

Those deepened tensions extend to the regional capital, Kharkiv.

Ukraine’s second largest city is home to over a million people and was, for a period, the country’s capital, during the Soviet era.

People here were alarmed after President Volodymyr Zelensky warned in an interview that their city could be an early target if President Vladimir Putin decided to invade.

You wouldn’t necessarily know it’s a city on edge as they go about their lives, but that doesn’t mean they’re not scared.

Victor Pichugin and Yulia Napolska are young professionals who live and work in Kharkiv, their lives revolving around their home city. And although they say they’re used to the cross-border tensions through eight years of war, it feels worse these days.

“It feels like we are on the edge of something really terrible, and scary, and so yes, I can say this, I’m scared,” Victor told me after considering my question for a moment.

He also said he wasn’t sure if he’d stay, but that he might attempt to leave. He doesn’t want war, he told me Ukraine is a peaceful country.

Yulia has decided to train to be a battlefield medic. She told us she won’t be able to sit by and do nothing if her city, her friends and family, end up needing help.

“You know Russians are living by war, by their imperial ambitions, but Ukrainians, I agree with Victor, we are a peaceful nation, but in case, if someone tries to take our freedom again, we will fight back.”

The truth is that nobody knows what a full-scale invasion would look like were it to happen.

And what’s equally unknown is for how long the Ukrainian army would be able to resist.

‘I’m asking the questions’: Sciutto pushes back on GOP lawmaker over debt ceiling
Police release image of new witness they want to speak to after disappearance of Nicola Bulley
British Gas takes action amid claims debt firm broke into homes to install prepay meters
PM was told of Raab’s ‘unacceptable behaviour’ before appointing him to cabinet, source says
Diplomatic row between China and US escalates as Pentagon says second ‘spy balloon’ being tracked