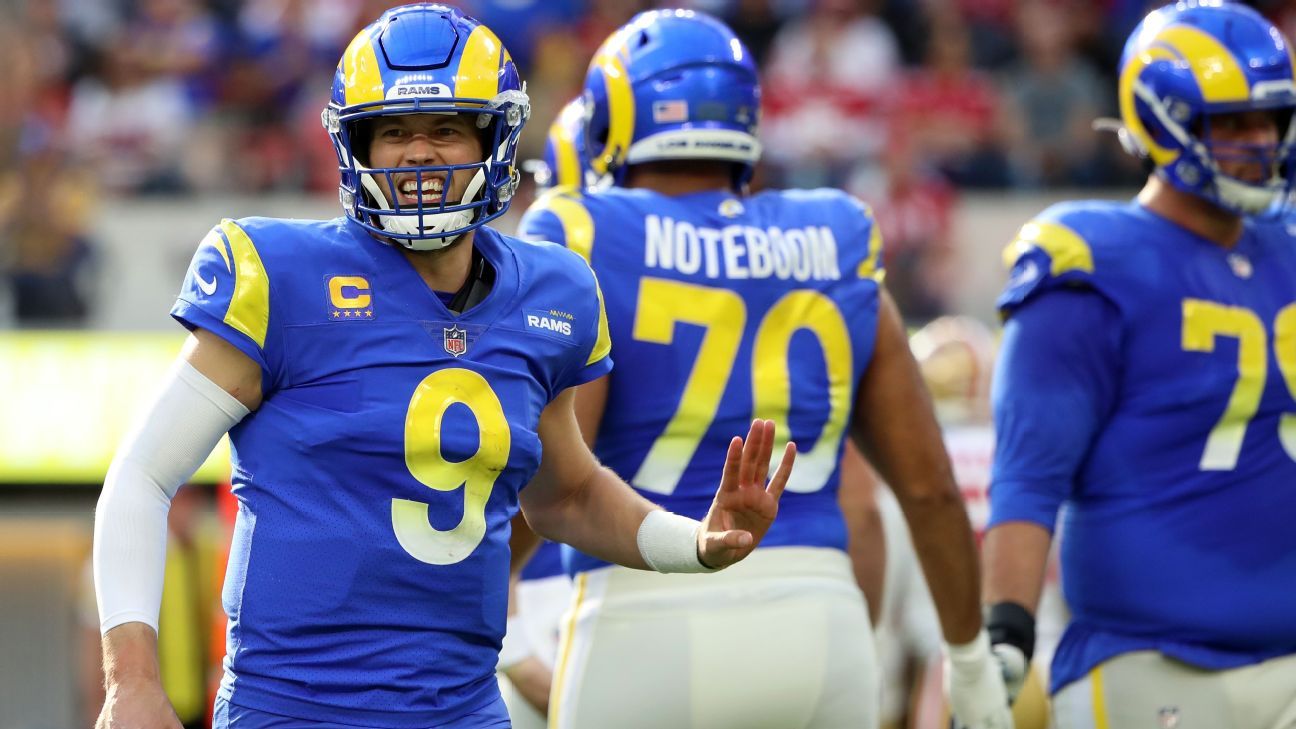 Los Angeles Rams quarterback Matthew Stafford doesn’t expect his injured toe to be a factor in Sunday’s divisional-round game against the Buccaneers in Tampa, Florida.

Stafford suffered the injury in the Rams’ regular-season finale against the San Francisco 49ers, a 27-24 overtime loss.

“I’m feeling OK,” Stafford said Wednesday. “The toe kind of happened in that game and that was kind of a real thing, but I got a bunch of treatment on it. I’m feeling a lot better. So I don’t see anything limiting me in this game.”

Coach Sean McVay said one of the reasons he tried to put the 49ers away with their run game near the end of regulation was because Stafford was hobbled. He said Stafford had “no limitations” Monday night against the Arizona Cardinals as the Rams leaned on their run game for much of their 34-11 wild-card victory.

Stafford was 13-of-17 passing, both easily season-lows, for 202 yards and a pair of touchdowns. He also ran for a score in the first playoff victory of his 13-year NFL career.

“He felt good,” McVay said. “Everything was up and available to be called. He was feeling great.”

The Rams are uncertain about the statuses of left tackle Andrew Whitworth and safety Taylor Rapp for Sunday’s game.

Whitworth, 40, got his right knee rolled up on during the Rams’ opening play against Arizona. He played 30 of the team’s 60 offensive snaps before Joe Noteboom replaced him for the remainder of the game.

McVay said tests results haven’t indicated that the Rams need to rule Whitworth out yet. He’d be a nonparticipant if the Rams were practicing Wednesday, per McVay.

“He’s got some swelling in that knee and that ankle,” McVay said. “It’s a miracle. He’s like Gumby with the way that he got rolled up on. It was not a good-looking play when you watch it on the replay. But he’s a resilient guy. He responds quickly. He’s been a quick healer. For him to be able to play and start at tackle at the age of 40 tells you everything you need to know about how blessed he is with his genetics and the way he takes care of himself.

“But we’ll see how quickly he can turn around. Not sure whether he’ll be able to go or not this week. We’ll take it a day at a time. Fortunately his scans gave us some information where we didn’t have to rule him out.”

Rapp, who missed the Cardinals game, remains in concussion protocol. His absence and Jordan Fuller‘s season-ending ankle injury prompted the Rams to bring 37-year-old Eric Weddle out of his two-year retirement last week to pad their safety depth. He played 19 of 56 defensive snaps while Nick Scott and Terrell Burgess started.

“With Rapp, we’re just taking that a day at a time,” McVay said. “The concussion protocol and kind of going through those strategic steps and making sure that when you are active, you’re not having any symptoms. Those are the things we’re working through right now and I know Taylor’s going to do everything in his power to be ready if he can.”

Cornerback David Long Jr. (knee) is “doing good,” per McVay. He returned one of the Rams’ two interceptions of Kyler Murray for a touchdown Monday night. McVay said backup running back Buddy Howell (hamstring) also would have been a nonparticipant Wednesday and that “everybody else would be in good shape” if the team was practicing.

McVay expects the Rams to designate linebacker Ernest Jones to return to practice from injured reserve on Thursday, thereby starting his 21-day window to be activated to the 53-man roster.

Weekend Project: I added a solar panel to my electric mini-truck to charge from the sun
Tech stocks just finished a five-week rally — the longest stretch since market peak in November 2021
NHS Crisis: 27 hours for a bed
Netflix says new password sharing rules were posted by accident
Retired general explains why tanks are so significant on the battlefield