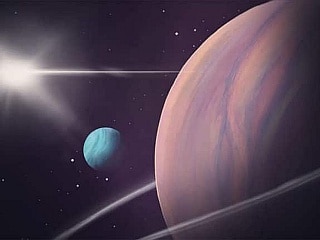 Scientists have discovered more than 10,000 exoplanets, those that lay quietly beyond our solar system, but they have not been able to locate a moon orbiting any of them – so far. In a new study, they have outlined a discovery that they say could change this. Researchers think the celestial body they have now found could be a massive moon orbiting a planet outside the solar system. The moon orbits a Jupiter-sized exoplanet and when the initial investigation is confirmed, it can become the first-ever “exomoon”.

Another candidate for exomoon was found four years ago, but that discovery is still awaiting confirmation. And, many fear that the new candidate could meet the same fate. Both the candidates share several characteristics, including circling similar planets, but the new one is a little smaller. Scientists believe both these objects are made up of gas and could have once been planets of their own, but were later pulled into the orbit of the surrounding, bigger worlds.

The new object is revolving around Kepler 1708b, an exoplanet 5,500 light-years from Earth, according to the study published in the journal Nature Astronomy. Scientists used NASA’s Kepler space telescope to look at 70 gas giants and found only one candidate that indicated to be an exomoon. This candidate is about 2.6 times larger than Earth.

Encouraged by the recent discovery, researchers believe there are likely to be more moons in distant worlds, which could be similar to our moon. “The first detections in any survey will generally be the weirdos,” David Kipping, who led the research on both the new and older exomoon candidates, told the Independent. “The big ones are simply easiest to detect with our limited sensitivity.”

Both the moon candidates are located far from their host star, which means they are less likely to be pulled out of their respective orbits.

‘Coming very soon!’: Jeremy Renner shares image of new show which will be out ‘as soon as I’m back on my feet’
GM’s latest look at the Equinox EV has us guessing on range, battery, and price
Why the problem of prepayment meters won’t go away for vulnerable energy customers
Sources: Chelsea sign Fernandez for record fee
Spy balloon over US is actually ‘civilian airship’ that blew off course, says China