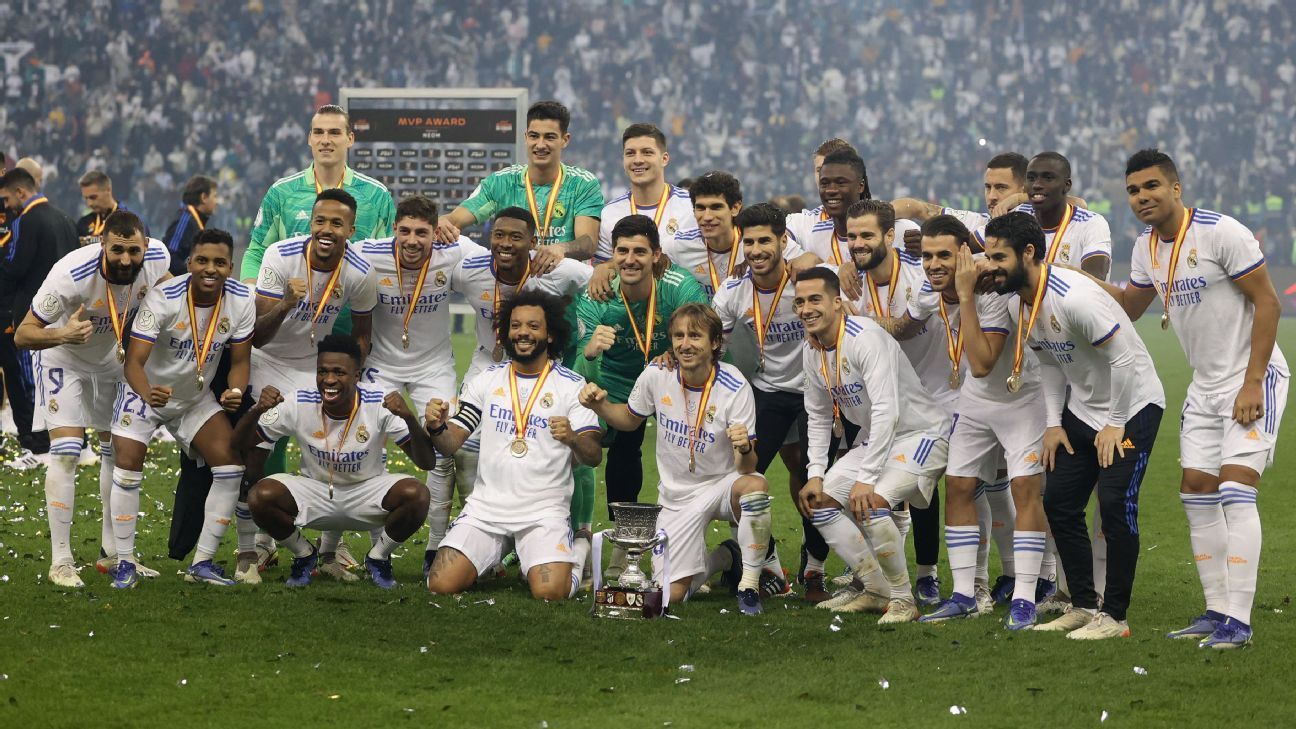 There were mixed fortunes for some of Europe’s biggest clubs over the weekend, with Real Madrid claiming silverware and Manchester United enduring more issues on and off the pitch. Meanwhile, there was controversy in the Copa del Rey and wins that moved Manchester City and Bayern Munich closer to title triumphs.

Here are Mark Ogden, Alex Kirkland and Andrew Cesare Richardson with what you need to know from around Europe.

Yes, it’s only the Spanish Supercopa and more trophies will be required come the end of the season to consider the campaign a success — this is Real Madrid after all — but Carlo Ancelotti deserves credit for building a serious team that plays to its strengths and more often than not, gets the job done.

The 2-0 win over Athletic Bilbao in Sunday’s Supercopa final in Saudi Arabia was relatively uneventful and the players who did the most to deliver the trophy were also unsurprising. Luka Modric and Karim Benzema got the goals and, just to be sure, Thibaut Courtois saved a late penalty conceded by Eder Militao, who was sent off for handball.

Athletic are a potentially awkward opponent, expertly drilled by coach Marcelino, but the team that surprised Atletico Madrid with a second-half semifinal comeback never looked close to causing another upset.

Modric felt like a fitting choice as the final’s MVP after finishing off a lethal end-to-end team move, all quick passes and smart decisions, to put Madrid ahead in the 38th minute. Remarkably, it was his first goal of a season in which he has been denied numerous times by the woodwork.

Benzema doubled the lead from the spot, but by the final whistle it was Courtois who caught the eye with a penalty stop that defied physics, throwing himself to his right while simultaneously lifting a leg high to his left to keep out Raul Garcia‘s shot. — Kirkland

Ralf Rangnick was hired as interim Man United manager with the primary objective of steadying the ship and putting the team back on track for a top-four finish, but a 2-2 draw at Aston Villa was the latest example of his struggle put a lid on the chaos at the club.

Throwing away a 2-0 lead by conceding twice in the final 13 minutes was bad enough in terms of that pursuit of a Champions League place, but Rangnick revealed post-match that he could not fill his substitutes’ bench because Anthony Martial refused to travel with the squad (a claim later denied by the transfer-seeking forward).

This came at the end of a week in which Cristiano Ronaldo criticised the attitude of younger players and Marcus Rashford‘s dismal performance against Villa in the FA Cup highlighted his prolonged loss of form; United are drifting toward the rocks at alarming speed and putting things right this season is beyond Rangnick.

But there is a potential positive from the negativity: With so many issues coming to the surface, whoever is hired as permanent manager may arrive when all the problems are on the way to being dealt with. If Rangnick’s legacy is to accelerate the end of a culture of players indulged and allowed to under-perform, his time in charge will not have been a failure. — Ogden

The Sevilla–Real Betis rivalry is Spain’s fiercest and most unpredictable, but the highs and lows of a Copa del Rey tie between the teams, which stretched over two days, were extreme even by the fixture’s own standards. Sergio Canales‘ goal gave Betis a 2-1 win and quarterfinal spot, but the result felt like an afterthought.

A game that began on Saturday night in front of 50,000 fans — and produced a pulsating opening 40 minutes — was brought to a sudden halt when Sevilla’s Joan Jordan was hit on the head by a plastic pole thrown from the stands. When the tie eventually ended on Sunday, it was completed behind closed doors and the loudest noise at the Benito Villamarin came from both clubs’ post-match complaints.

Beyond united condemnation of the act itself, there were questions as to whether Sevilla had sought to turn the situation to their advantage. Several Betis players, including Victor Camarasa, took to social media to accuse their rivals, and coach Julen Lopetegui, of encouraging Jordan to exaggerate his condition.

That sparked a furious reaction from Lopetegui, who called it “absolutely deplorable.” Meanwhile, his counterpart Manuel Pellegrini, whose side’s impressive season comntinues, questioned how much harm what the Spanish football federation’s report called “a 50 centimetre hollow PVC bar” could do. — Kirkland

Dybala reaction has Serie A talking

Paulo Dybala is known for his “mask” celebration but, having scored an impressive opener against Udinese, his decision to simply turn around and run to the halfway line, before appearing to glare at the Juventus directors’ box, has led to more speculation about his future.

Cristiano Ronaldo’s exit last year was supposed to set the stage for Dybala to become Juve’s central figure and he has showed his quality — this latest goal followed a fine effort against Roma last week — but his inability to perform for an entire season and stay injury-free appears to concern the hierarchy.

The Argentina‘s international’s contract expires on June 30 and recent reports have suggested the club’s latest offer was lower than previous terms discussed. Meanwhile, speculation in Italy has suggested Inter could sign the 28-year-old on a free transfer at the end of the season.

Inter director Beppe Marotta oversaw Dybala’s move to Juventus from Palermo in 2015 and Nerazzurri manager Simone Inzaghi was asked on Saturday if he would be interested in managing the forward, though he expertly side-stepped the question. — Richardson

In any debate about the best-ever Premier League midfielder, Kevin De Bruyne has earned the right to stand alongside Roy Keane, Patrick Vieira, Paul Scholes, Frank Lampard and Steven Gerrard, all of whom could score great goals akin to the winner De Bruyne provided against Chelsea.

The Belgium international received the ball midway inside the Chelsea half and pulled clear of N’Golo Kante before racing toward the penalty area. Then, from 25 yards, De Bruyne let loose a curling right-foot shot that flew beyond Kepa Arrizabalaga and sealed a win that moved the champions closer to retaining their title.

The 30-year-old is a model of consistency, so much so that his quality is sometimes overlooked when talk turns to the best players in the league, but De Bruyne can also do the spectacular and this pinpoint strike against was a sublime piece of skill. — Ogden

It might have been Ciro Immobile, who set up a comfortable 3-0 win at Salernitana with a cool finish, but the goal will be remembered more for an inch-perfect backheel assist by Sergej Milinkovic-Savic, who continues to show he is a world-class midfielder and worthy of a move to one of Europe’s elite teams.

Maurizio Sarri is known an impressive style of play and this combination was evidence his players are starting to understand. Speaking after the match, the Lazio manager said of Milinkovic-Savic: “I have coached many great players, but he is one of the best I’ve ever worked with. His progress over the last two months has been excellent and he really can take another step up in quality. He used to lose the ball too cheaply, but now he plays with more determination.” — Richardson

The incident that caused the Seville derby to be suspended came seconds after what should have been the game’s defining moment: Yet another piece of visionary, improvisatory genius from Nabil Fekir, who celebrated his new contract at the club with something special.

Preparing to take a corner, Fekir spotted Sevilla goalkeeper Alfonso Pastor off his line, organising his defence and whipped a vicious left-footed delivery into the top corner. It was overshadowed by what followed, but the goal showed again why Fekir — and Betis — are as consistently entertaining as any player or team in Spain. — Kirkland

Two teams that should be worried

Only Juventus, Inter and AC Milan have won Serie A more times than Genoa, but it is 98 years since the Rossoblu won the last of their nine titles and the dismissal of Andriy Shevchenko after just 11 games in charge highlights how far the once mighty club has fallen.

Having guided Ukraine to the Euro 2020 quarterfinals, Shevchenko and his burgeoning reputation took first steps in club management in November when Davide Ballardini’s fourth spell in charge was brought to an end. Two months and nine winless league games later, though, Shevchenko is out.

Genoa have promoted Abdoulay Konko from the youth team to take interim charge, but the club’s only league win was way back in September and, with a six-point gap to fourth-bottom Venezia, relegation looks likely. –– Ogden

They might have qualified for the Champions League knockout rounds ahead of Barcelona, but Benfica are struggling in league play and their faltering title challenge took another hit with a home draw against relegation-candidates Moreirense.

The Eagles began December with a 3-1 home defeat against Lisbon rivals Sporting and — after three-time title-winning manager Jorge Jesus left his position — ended it with back-to-back losses against Porto, first in the Taca de Portugal, then in the Primeira Liga.

Nelson Verissimo, appointed until the end of the season, started his tenure with the second of those defeats and, while he followed up with victory over Pacos de Ferreira, the draw with Moreirense leaves Benfica nine points adrift of leaders Porto and has all but ended the club’s hopes of a first league title since 2019, and 38th overall. — Richardson

A resounding win from @FCBayernEN as they put FC Koln to the sword.

Robert Lewandowski scores goals with such unerring, relentless frequency that even a hat trick, like the one he notched in a 4-0 win at FC Cologne, barely feels like news. His latest performance, though, not only restored Bayern Munich’s six-point lead at the top of the Bundesliga, but set not one, but two significant milestones.

Not only was this was Bayern’s 66th consecutive league game without being shut out — a record stretching back to a 0-0 draw with RB Leipzig in February 2020 — but Lewandowski has scored 300 Bundesliga goals. Even at 33 and with his Bayern contract up next year, you would not rule out him catching the legendary Gerd Muller, who leads all scorers with 365. — Kirkland

FTSE 100 reaches all-time high
Priscilla Presley contests validity of Lisa Marie Presley’s will
‘Blood will be on hands’ of Congress if bill limiting police officer immunity not passed, Tyre Nichols’ mum says
Tech stocks just finished a five-week rally — the longest stretch since market peak in November 2021
‘I was not given a realistic chance’, says Liz Truss, as she makes comeback