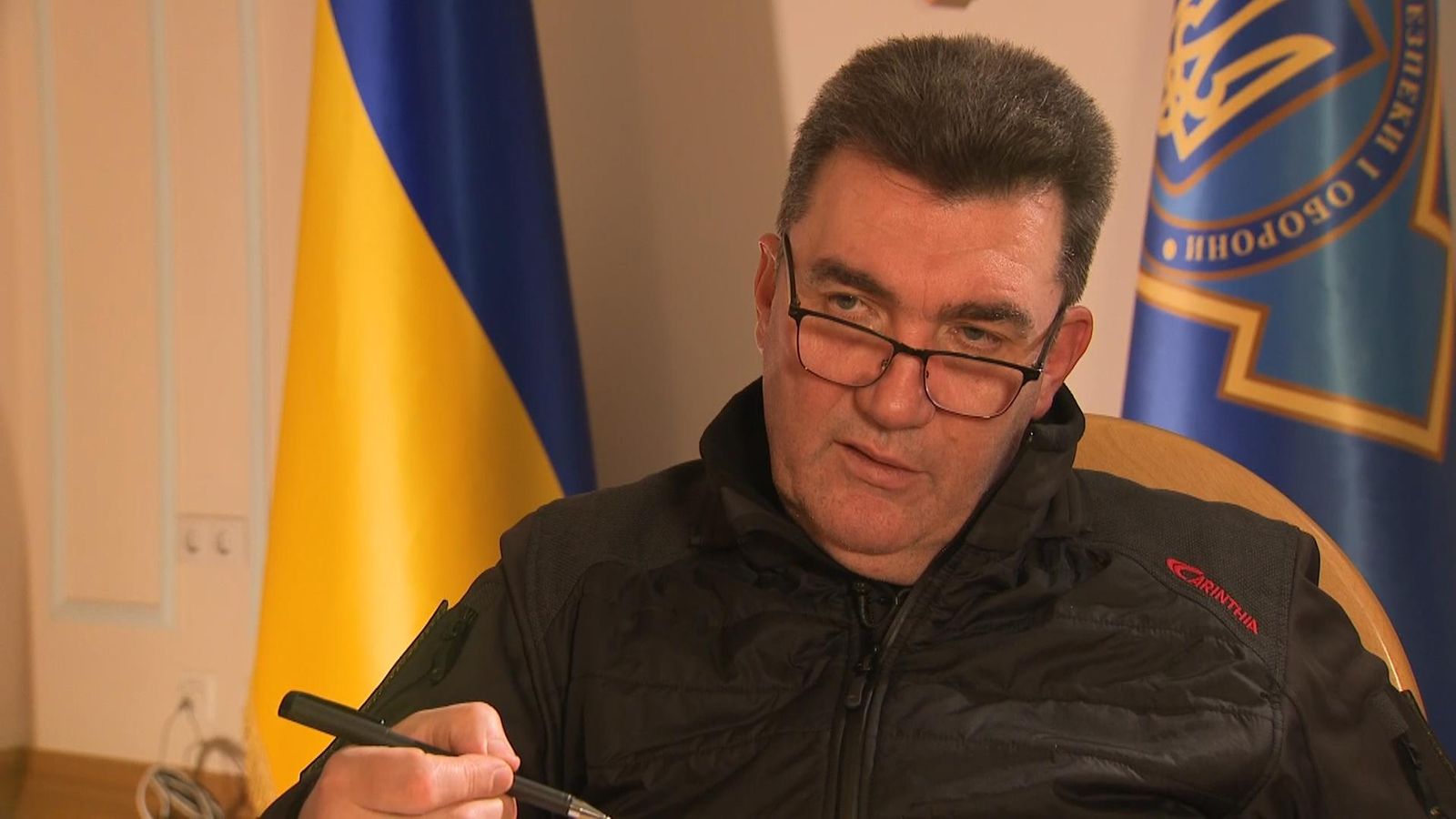 Ukraine is “99.9%” sure Russia was behind a massive cyber attack against Ukrainian government websites and the hack could signal a new physical invasion will follow, the president’s top security official has told Sky News.

Oleksiy Danilov, secretary of the National Security and Defence Council of Ukraine, revealed that some areas within the government’s security and defence departments have been put on an even higher state of alert than usual in case of further hostilities.

He noted that the cyber attack was a “textbook” move ahead of real-world military action.

Asked if a new Russian invasion could happen as early as the weekend, Mr Danilov said: “It can happen on any day. Again, it depends only on one person – [Russian President] Vladimir Putin.”

‘Russia is not threatening anybody’

The senior official said in an exclusive interview that the cyber hack began at 2am local time on Friday and that only an hour later it was being reported on in Russia.

They “should have been asleep at that time as it was 3am”, he said, speaking at the National Security and Defence Council building, within a well-guarded compound in Kyiv.

“Their number one task for today is to rock our internal situation.”

The attack, which impacted about 70 government websites, splashed a warning for the public to “be afraid and expect the worst”.

It came as Russia continued to mass some 100,000 troops on Ukraine’s borders despite a week of high-stakes diplomacy with the United States and other NATO allies aimed at trying to defuse the crisis but which, as feared, failed to produce any breakthroughs.

Mr Danilov seemed to have little doubt who was responsible for the cyber attack.

“We can clearly track their signature. These are the Russian specialists who perform these actions,” he said.

Asked directly if he believed Russia was behind the hack, he said: “I am 99.9% sure.”

Russia has in the past denied allegations that it has conducted hostile cyber attacks.

Mr Danilov, who turns 60 this year making him, he said, the oldest official advising President Volodymyr Zelensky, underlined that his country is no stranger to hostilities.

It has endured a war with Russia for the past eight years, since Moscow annexed Crimea and backed an insurgency in the east of the country.

Asked whether he had a message for Mr Putin, the top security official said: “It’s quite simple: please take your soldiers and your weapons out of our territory and bring them home.

“You have your own business to take care of, a huge bother awaits you there. If you don’t manage your country sooner or later it will collapse, and it will happen in front of our eyes.”

He added: “Ukrainians are peaceful, we have never ever attacked anyone. We only defend ourselves all the time. Moreover, I’m more than sure that the victory will be ours because the truth is on our side, and the truth always wins.”

On the frontline with Ukrainian troops

In another part of Kyiv, cyber officials were dealing with the hack from a newly-built cyber security centre.

It is the public-facing part of Ukraine’s cyber defence capability – an area that has been significantly enhanced, with help from the US and the UK, since Ukraine suffered previous large-scale cyber attacks, attributed to Russia. Those attacks coincided with previous Russian military action against the country from 2014.

A top cyber official, speaking at the centre, said that British and American officials were the first to contact Ukraine and offer assistance in responding to the attack.

Asked if that offer had been accepted, Lieutenant Colonel Yurii Shchyhol, chairman of the State Service of Special Communications and Information Protection of Ukraine, told Sky News: “Yes. They help us with their experience, skills and specialists.

“We try to restore everything and I think we’ll do it soonish.”

As well as responding to the hack, officials at the centre were also training to bolster Ukraine’s defences for the next one.

Viktor Zhora, deputy chairman of the service who has a focus on digital development, said that Ukraine endures about 50,000 cyber attacks a week, but that one as serious as Friday’s hack only happens every two to three years.

He said Ukrainian cyber defences are usually sufficient to deal with hacks but no country is immune.

“When you have a lot of resources, when you have a huge army of cyber professionals that are basically cyber terrorists, then it is easy to hack even the most protected infrastructure,” he said.

Ukraine does not have offensive cyber weapons to attack back, but the official said it was prepared to defend against more assaults from Russia.

“Everybody is doing his work – our soldiers in the east [of Ukraine] protecting our borders and we here are protecting Ukrainian cyber space.”