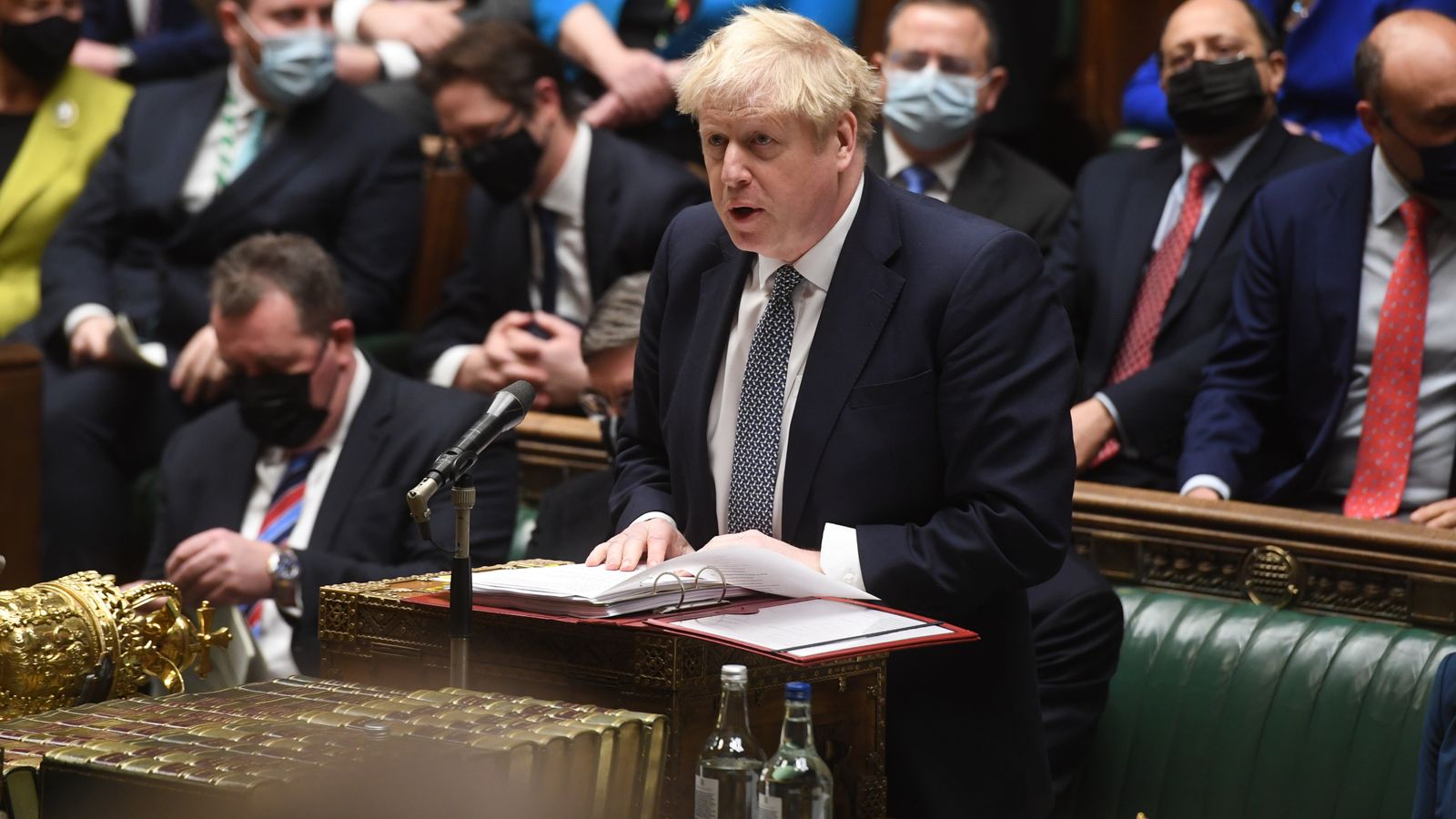 Boris Johnson has cancelled a visit to Lancashire today because a family member has tested positive for COVID, Downing Street said.

A Number 10 spokesman said the prime minister will “follow the guidance for vaccinated close contacts, including daily testing and limiting contact with others”.

It is not known which member of Mr Johnson’s family has tested positive, but he lives with his wife, Carrie Johnson, and his two children, Wilfred, 20 months, and Romy, who is five weeks old, at Number 11 Downing Street.

Follow live COVID updates from the UK and around the world

The PM has not said anything publicly about the situation, but tweeted on Thursday morning to thank England’s deputy chief medical officer Sir Jonathan Van-Tam following the announcement that he was leaving his post.

Mr Johnson hailed his “extraordinary contribution” after the scientist announced his extended secondment to the government will end in March, when he will return to the University of Nottingham.

I would like to thank Jonathan Van-Tam for his extraordinary contribution to our country and his invaluable advice throughout the pandemic. Wishing him the very best for the future. https://t.co/4E6XIszJED

The cancelled visit comes a day after Mr Johnson apologised for attending a party at Number 10 during the first lockdown, which has prompted calls for his resignation from the opposition but also from within his own party.

However, ministers have thrown their support behind him, with Northern Ireland Secretary Brandon Lewis on Thursday morning backing Mr Johnson to lead the party into the next election and to win it.

But, asked if Mr Johnson can continue as prime minister if an investigation finds he misled parliament by insisting he did not break COVID rules – in theory, a resigning matter – Mr Lewis dodged the question.

“That is making a pre-judgement on what the report will find,” he told Kay Burley.

Four Conservative MPs have publicly called for Mr Johnson to resign, saying his position is now “untenable” after he claimed the party on 20 May 2020 was a work event that did not break lockdown rules.

Letters of no confidence

There are claims letters from Conservative MPs were being submitted to Sir Graham Brady, head of the influential 1922 Committee of backbench Tory MPs.

How this ends is still so uncertain, but what is clear is that Boris Johnson is now in the throes of the most acute political crisis of his premiership.

So, when he turned up stony-faced in the Commons on Wednesday to offer an account of that Downing Street drinks event at the height of lockdown in May 2020, he had to give the PMQs performance of his premiership.

There was, as his MPs had demanded, an apology of sorts.

He was sorry that the May 2020 garden gathering left the impression that those in Downing Street were not properly following rules, and he admitted he had briefly joined the jamboree and acknowledged “the rage” felt by the public.

But it soon became clear – particularly when put under scrutiny by Sir Keir Starmer’s forensic questioning – that the PM wasn’t apologising for holding the event full-stop, but rather how it had gone down with the public and the party.

It is not known how many have been handed in, but 54 letters – 15% of Tory MPs – would be needed to prompt a vote of no confidence in the PM, which could lead to him being ousted by his own MPs.

Explainer: What would it take for Boris Johnson to be ousted by his own party?

Lockdown parties: What we know

A handful of Tory MPs are suspected of handing over letters to Sir Graham after voicing their displeasure at the PM, but only one, Sir Roger Gale, has confirmed he has done so as he described Mr Johnson as “a dead man walking”.

He told Sky News on Wednesday: “I have written to Sir Graham Brady and said that there should be a leadership contest.

“I do believe that in this instance, the 1922 Committee have a duty to go to the prime minister and have a word with him, because we cannot go on like this. I say this with a heavy heart because he has got Brexit done.”

Tory MP William Wragg, vice-chair of the 1922 Committee, also did, as he said he feared the saga was “simply going to be a continuing distraction to the good governance of the country”.

Caroline Nokes is the other Conservative MP who has publicly called for Mr Johnson to quit.