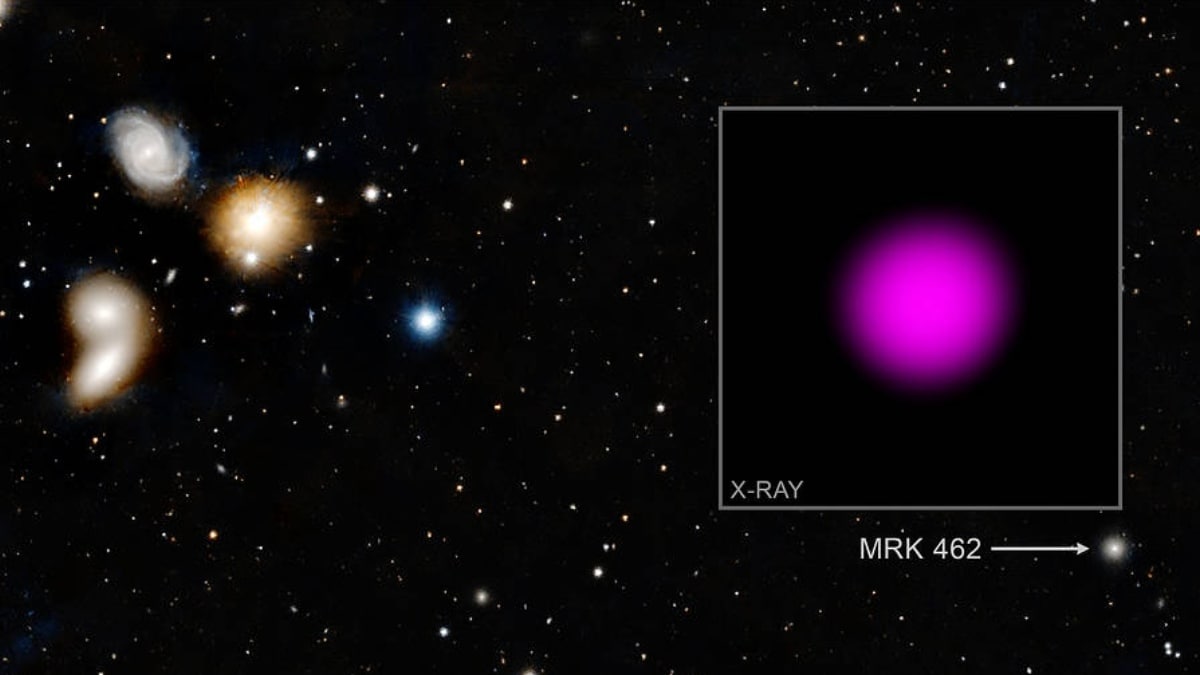 Using NASA’s Chandra X-ray Observatory, researchers have identified a black hole having 200,000 times the mass of the Sun in Mrk 462, a dwarf galaxy with only several hundred million stars. In comparison, our Milky Way has a few hundred billion stars. The black hole was heavily buried in gas and dust in Mrk 462 galaxy, which is 110 million light-years away in the constellation of Canes Venatici.

NASA said in a blog post that it’s one of the first times that an “obscured” supermassive black hole has been found in a dwarf galaxy. Astronomers often find black holes by looking for rapid motions of stars at the centre of galaxies. But dwarf galaxies are too small and dim for most current instruments to detect this. A second technique astronomers use to detect black holes is to search for signatures of gas heating up to millions of degrees and glowing in X-rays as it falls towards a black hole.

Jack Parker of Dartmouth College in New Hampshire, who led the study with colleague Ryan Hickox, also from Dartmouth, said that the black hole in Mrk 462 was among the smallest of its kind.

Hickox said that as buried black holes were difficult to detect than those exposed, this discovery could indicate the existence of many more dwarf galaxies with similar black holes. He also added that this finding could help astronomers answer how did black holes get so big so early in the universe.

The researchers in this study used Chandra to look at eight dwarf galaxies that had previously shown hints of black hole growth. Of them, only Mrk 462 showed the X-ray signature of a growing black hole.

California’s $10M electric bike rebates are coming. Here are the latest updates
Labour calls for investigation into appointment process for BBC chair after ‘sleaze’ claims
Joey Votto isn’t just a future Hall of Famer; he is the future of the Hall of Fame
Liverpool and Manchester United fans set aside rivalry to demand action on club ownership
Bubbles freeze in -50C temperatures