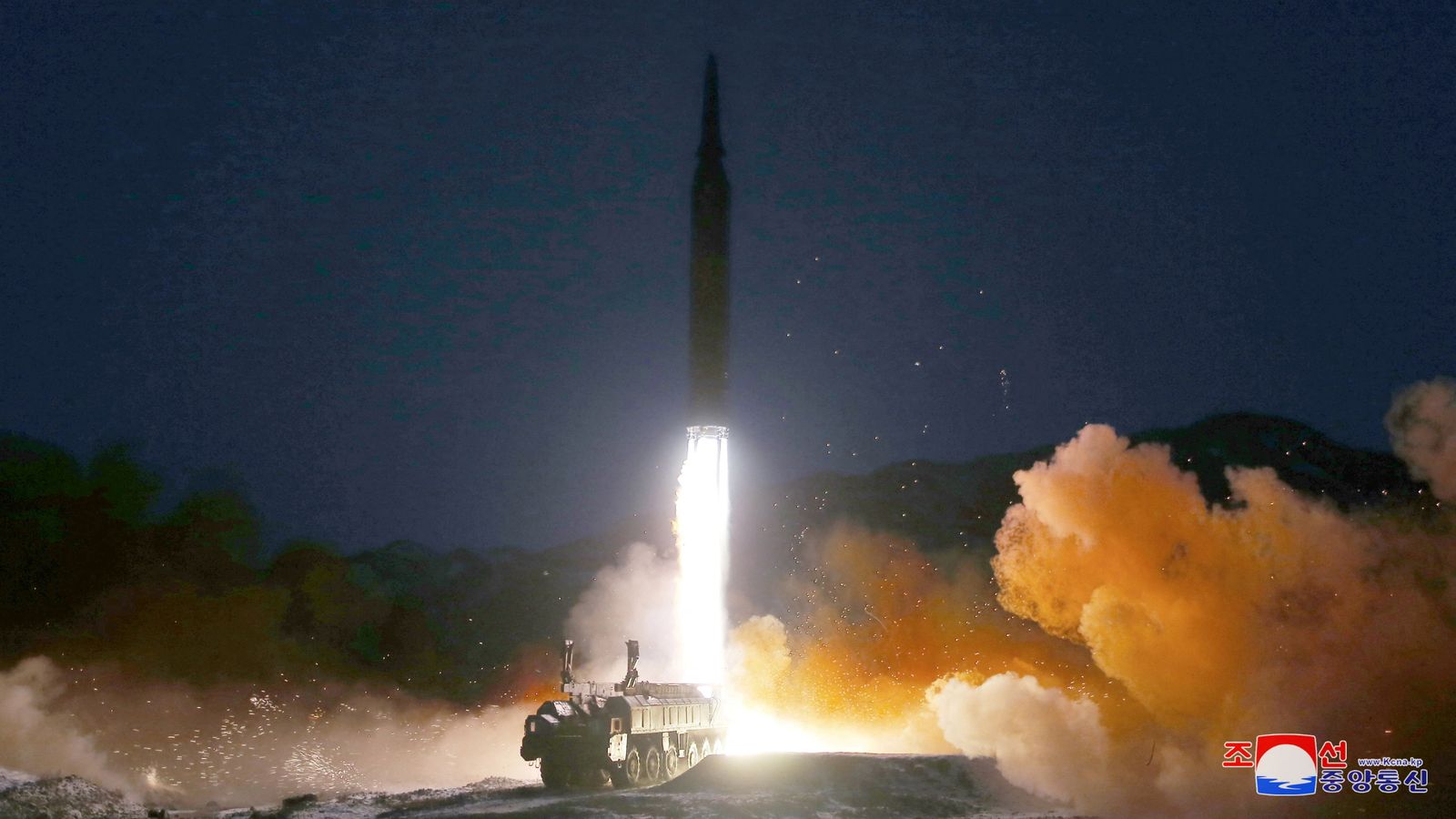 North Korea has carried out a successful test of a hypersonic missile in a launch attended by leader Kim Jong Un, the country’s state media has reported.

Authorities in South Korea and Japan detected the suspected launch on Tuesday, leading to condemnation from authorities in Washington and Tokyo.

After its release from a rocket booster, a hypersonic glide vehicle made a 600km (375 mile) “glide jump flight” and then 240km of “corkscrew manoeuvring” before hitting a target in the sea 1,000km (621 miles) away, state news agency KCNA said.

The launch was the second reported hypersonic test in less than a week.

And South Korea said it appeared to show improved performance, with the missile travelling more than 700km (435 miles) at a maximum height of 60km (37 miles) and reaching a top speed up to 10 times the speed of sound (7,673mph), although Seoul did not comment on its manoeuvrability.

Unlike ballistic missiles that fly into outer space before returning on steep trajectories, hypersonic weapons head towards targets at lower altitudes.

It was the first time Mr Kim had officially attended a missile launch since March 2020.

And it underscored his New Year’s vow to bolster the military with cutting-edge technology at a time when talks with South Korea and the US have stalled.

It prompted UN Secretary-General Antonio Guterres to say he was “very concerned” by the latest launch.

“The test fire was aimed at the final verification of overall technical specifications of the developed hypersonic weapon system,” KCNA reported.

The agency added that “the superior manoeuvrability of the hypersonic glide vehicle was more strikingly verified through the final test fire”.

KCNA also reported that Mr Kim has urged military scientists to “further accelerate the efforts to steadily build up the country’s strategic military muscle both in quality and quantity and further modernise the army”.

The European Union has criticised North Korea’s latest missile launch, a spokesman for the EU’s High Representative for Foreign Relations said in a statement, urging the country to “respond constructively” to US readiness for diplomacy.

“North Korea’s actions pose a threat to the peace and security of our country, the broader region, and the entire international community. We strongly condemn such actions,” he said at a briefing, News24 reports.

Although North Korea has not tested nuclear bombs or long-range intercontinental ballistic missiles (ICBMs) since 2017, in recent years the country has developed and launched a range of more manoeuvrable missiles.

Hypersonic weapons are considered the next generation of arms that aim to rob adversaries of reaction time and traditional defeat mechanisms.

Joe Biden’s administration has said it is open to talking to North Korea, but Pyongyang has said American overtures are empty rhetoric without more substantive changes to “hostile policies” such as military drills and sanctions.