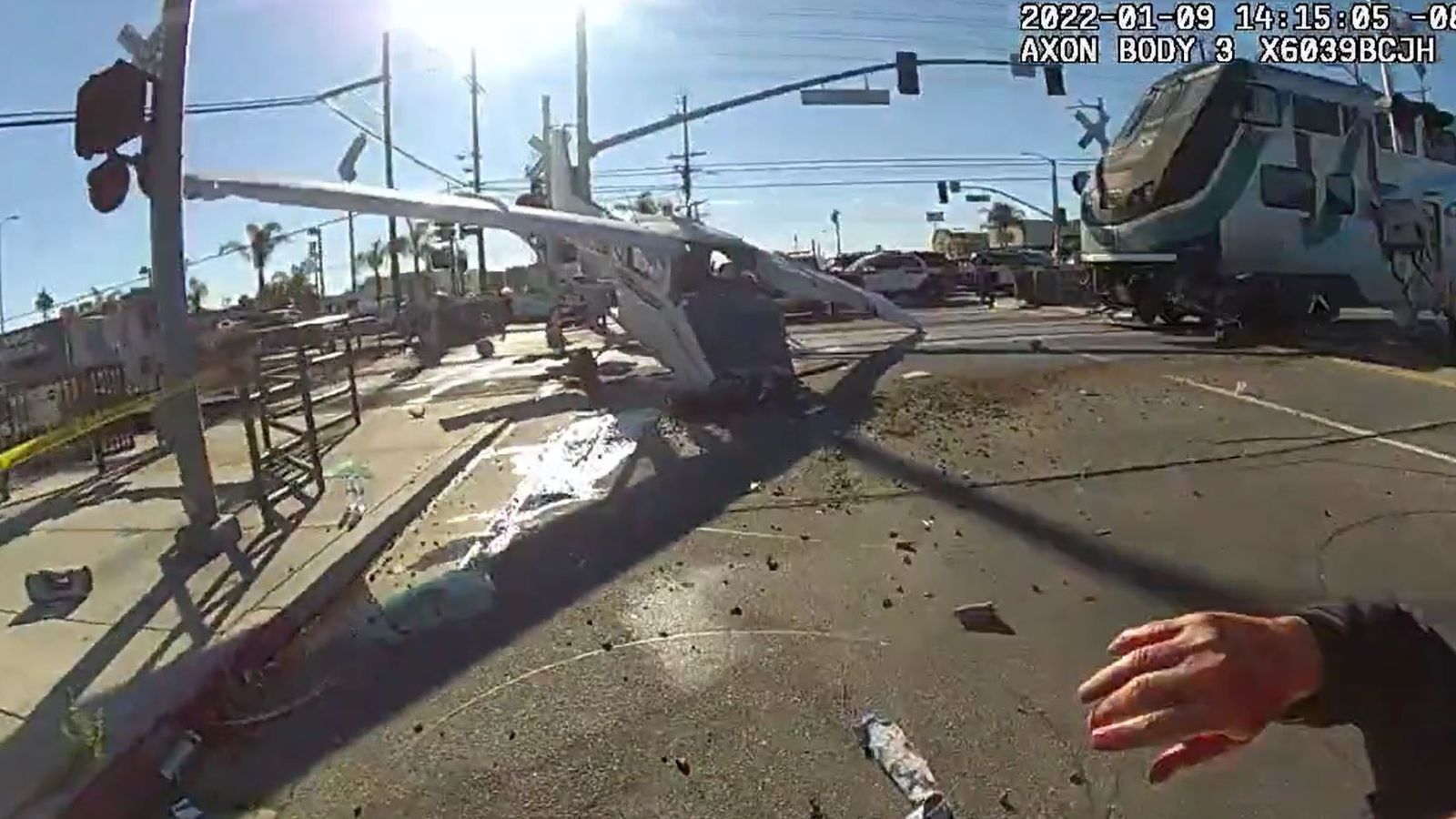 A man has been saved from near-death by police officers in Los Angeles after he crash-landed his plane onto railway tracks seconds before it was hit by a train.

The unnamed pilot was saved from the Cessna by quick-thinking officers who pulled him out just before a high-speed train smashed into the aircraft, sending debris flying everywhere.

The incident happened on Sunday, near to the Los Angeles Police Department’s station in Foothill on Osborne Street, near Whiteman Airport.

Foothill Division Officers displayed heroism and quick action by saving the life of a pilot who made an emergency landing on the railroad tracks at San Fernando Rd. and Osborne St., just before an oncoming train collided with the aircraft. pic.twitter.com/DDxtGGIIMo

Dramatic video obtained by Reuters news agency shows several officers freeing the man from the downed plane, which had crashed shortly after take off in the Pacoima neighbourhood, according to local media.

In it, the police officers and pilot are just a few feet away from the tracks when the passing train destroys the plane.

“The plane had a failed take off and landed on the train tracks at a popular intersection,” said Luis Jimenez, a 21-year-old music composer who filmed the video.

“Just seconds before impact police officers saved the pilot, and a piece of debris almost hit me.”

Separate video footage posted on Twitter by the LAPD showed bodycam footage of officers pulling the bleeding pilot from the plane.

The pilot was the sole passenger on the plane and first responders were called at around 2pm.

According to the LAPD’s Valley Bureau, the plane had lost power and crashed into the tracks.

The department applauded its officers, saying in the tweet they had “displayed heroism and quick action by saving the life of a pilot who made an emergency landing on the railroad tracks”.

The pilot was treated for cuts and bruises and is in a stable condition, according to local media.

No one on the train was injured.

Cloud leaders Amazon, Google and Microsoft show the once-booming market is cooling down
Retired general explains why tanks are so significant on the battlefield
Retired general predicts when Ukraine will see new tanks
‘I’m expecting death any time’: How South Africa’s scheduled power cuts put lives on the line
China ‘spy’ balloon: What are they? And why could they play a key role in the future of aerial reconnaissance?