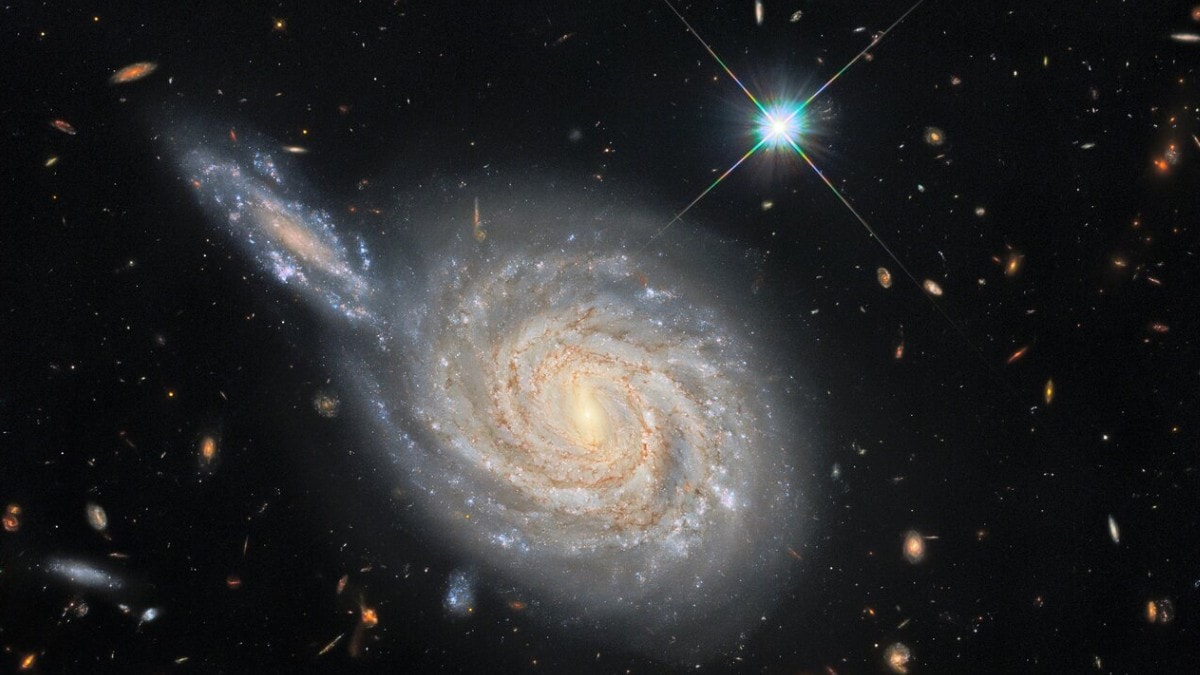 NASA has shared an image of a stunning cosmic duo of galaxies, located roughly 215 million light-years away from Earth in the Pisces constellation. The image was clicked by the Hubble telescope, NASA’s current workhorse to study the mysteries of deep space. NASA said the galaxies appear to be plunging into each other, but in reality, the two are far apart. The main spiral galaxy is called NGC 105 and its elongated neighbour appears to be touching its edge. That is, however, just “a circumstance of perspective,” the agency said.

Hubble Space Telescope, a joint project of NASA and ESA, was launched in 1990 and has been studying the cosmos since then. Because of its unobstructed view of the universe, the telescope has so far made more than 1.3 million observations, including capturing faraway galaxies. It has helped astronomers determine the age of the universe and keeps an eye on planets in the Solar System.

“This week’s image shows a spectacular cosmic duo of galaxies,” said NASA, adding the two galaxies are far more distant than they appear in the image.

French astronomer Edouard Stephan first found NGC 105 in 1884. Not much information is available about its elongated neighbour so far. To capture this image, the Hubble team used “a vast collection of Hubble measurements examining nearby galaxies that contain two fascinating astronomical phenomena.”

These two phenomena are cepheid variable stars, also known as pulsating stars, and cataclysmic supernova explosions, which happen after the death of a large star. Why do these phenomena matter? They help astronomers measure the distance between different cosmic objects. This results in a better understanding of how the universe is expanding.

The Hubble often shares spectacular images of intriguing celestial objects captured by it. Last month, it shared an image of a dazzling spiral galaxy named NCG 7329. The image showed a stellar whirlpool with yellow light concentrated at the centre and spirals tinted blue.

Having served for more than 30 years, the Hubble is now ageing and NASA and its international partners plans to replace it with the James Webb Space Telescope.