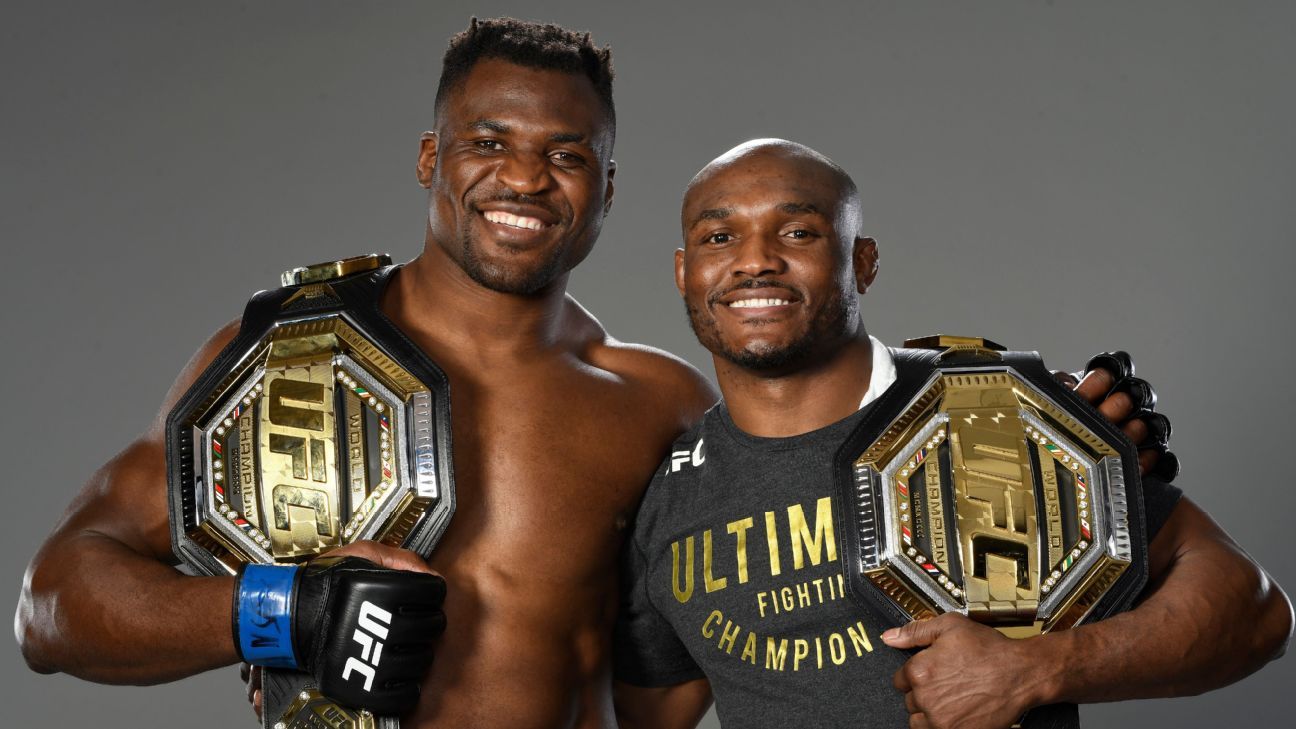 The shiny brass-and-leather belts worn by UFC champions do not merely signify achievement and ascendance. For the select few fighters who earn them, these esteemed titles can bestow an aura of invincibility.

Yet nothing is forever.

Among the 12 weight classes in the UFC, seven fighters now wear championship belts who did not own one on Jan. 1, 2021. That number rises to nine if you include interim straps. That’s a lot of change at the top of the sport, and in 2021 it got done in eye-opening ways.

A veteran of two decades in pro MMA finally captured gold in his 40s (Glover Teixeira). Two other challengers joined him in winning their first UFC title on their second tries (Francis Ngannou, Brandon Moreno). There was a coronation by disqualification (for the first time in UFC history) in a contest the winner was on his way to losing (Aljamain Sterling). One title tussle was held to fill a vacancy (Charles Oliveira). An ex-champ regained what was once hers (Rose Namajunas). And a title changed hands in perhaps the biggest upset in UFC history (Julianna Peña).

So while I’m inclined to proclaim that every one of today’s champions is so top-shelf that he or she will still reign at the end of 2022, we all know that will not be the case. Some belts are hotter potatoes than others, but if 2021 has taught us anything, it’s that anything is possible.

Still, I am not enough of a visionary to forecast that more than half of the UFC’s dozen titles will change hands, as was the case this year. I have a hard time seeing more than a few 2022 transfers of power. Even in the examples I offer below, I’m not so self-assured. But let’s forge ahead and take a look at where I can imagine change happening by next Dec. 31 … before I change my mind.

This is by no means an effort to diminish the accomplishment of Teixeira, who at age 42 choked out Jan Blachowicz in October to become 205-pound champion — nearly seven years after falling short in his first crack at UFC gold. Teixeira is as tough as they come in MMA, and his well-rounded skill set poses danger to opponents no matter where a fight takes place.

But Prochazka is special. He showed in his May fight with Dominick Reyes — and especially in the spinning back elbow that ended it — that he is the most inventive fighter that elite MMA has seen in years. Don’t be fooled by him being a new face on the scene with just two UFC appearances under his belt. The 29-year-old Czech has been a pro for a decade and was a champion in the Japanese promotion Rizin with some notable victories.

Prochazka has won 12 in a row — all but one by knockout — and has just one loss in two dozen fights going back to 2013. The finish of Reyes showed that competing at the highest level is not going to slow his roll. If he can keep the strong, steady Teixeira’s hands off of him and maintain striking distance when they meet sometime in the next few months, Prochazka has a great chance to walk away with the title. His time has come.

ESPN MMA’s Phil Murphy speaks with Petr Yan after being disqualified for an illegal knee in the fourth round of his bantamweight title fight vs. Aljamain Sterling.

It kinda feels like cheating for me to cite Yan among the year’s likely new champions, because he’s already been there and likely would still be, if not for an unfortunate — and illegal — knee he delivered to the face of Sterling in their March title fight, which ended Yan’s reign by DQ.

Yan went on to earn an interim belt in October with a win over Cory Sandhagen, and that makes it pretty much a certainty that he’ll get his shot at redemption against Sterling. Good thing. Yan was commonly viewed as the uncrowned champ — or the no-longer-crowned champ? — even before having the faux belt wrapped around him. Now it’s official.

There has been no date announced for Sterling-Yan 2, but when it does happen, I see no reason to believe the rematch will play out any differently from the first meeting — other than the ending, when Yan instantly went from full control to losing control.

Pantoja has won eight of his 11 fights in the UFC, and one of those victories in particular makes me believe that he has the edge on the champ. It was a 2018 fight with a pre-championship Moreno, which Pantoja won by unanimous decision by fending off five of Moreno’s seven takedown attempts and nearly doubling his striking output.

That was actually the second time the fighters were inside the Octagon together. They first met nearly two years earlier as part of Season 24 of The Ultimate Fighter, and that one went even better for Pantoja, who won by second-round submission. Since that fight was part of a reality TV taping, the result went onto the record as just an exhibition, not an official pro bout. But both men know what happened.

Now, here’s the catch: Pantoja might not even get a title shot in 2022. Moreno is first scheduled to defend his belt against former champ Deiveson Figueiredo. That bout will take place Jan. 22, leaving most of the year for another title defense. But next in line likely will be the winner of a March fight between Askar Askarov and Kai Kara-France. That could push a potential Pantoja title shot to the end of the year, at best.

The undefeated Askarov is the only 125-pounder who’s ahead of Pantoja in the UFC rankings, and he beat Pantoja just last year. But, hey, the whole purpose of this end-of-year exercise is for me to go out on a limb, so I’m going to shake the tree with the flyweight who in recent times has most impressed me.

Talk about going out on a limb …

There has been absolutely no recent conversation about Shevchenko going for champ-champ status — unless it was to complete her trilogy with Amanda Nunes, once both had cleaned out their respective weight divisions. But now Nunes is an ex-champ, and everyone — from Nunes, to her vanquisher, Julianna Peña, to both women’s boss, UFC poobah Dana White — expects that huge Dec. 11 upset to be run back right away.

Here’s the thing, though: Champions who lose their belts don’t fare well in immediate rematches. Two tried it last year, and both Daniel Cormier and Max Holloway failed in their attempts to get their belts right back. In the history of the UFC, according to ESPN Stats & Information research, 12 deposed champions have tried to climb back on the throne in their very next bout, and only two have succeeded: Stipe Miocic in 2019 and Randy Couture way back in ’04. That doesn’t bode well for the GOAT (and it’s not such a favorable stat for Figueiredo, either.)

Considering that Nunes has expressed a desire to take some time off before going after her old title, what if Peña were to first take on the flyweight champ? Shevchenko has wiped the 125-pound division squeaky clean, beating the top four contenders, and she also owns a 2017 submission win over Peña. So the new bantamweight champ could seize an opportunity for redemption here. And if she were to follow her upset of Nunes with a win over Shevchenko, that’d really be a stunner of a 1-2 punch.

Yeah, this idea is off the wall. But if we’re going to think outside the eight-sided box here, why not do it with the women’s pound-for-pound No. 1?

The rest of the story: What divisions will stand pat?

Heavyweight: I just don’t see anyone defusing the explosiveness of Ngannou in the coming year. I could be proved wrong in mere weeks, of course, as undefeated Ciryl Gane takes his shot at the champ on Jan. 22. And if Ngannou’s reign survives that challenge, next in line could be Jon Jones, if the all-time great can get his personal life in order and fix his broken relationship with the UFC. So there are big obstacles ahead for Ngannou to knock down, but he’s good at that.

Middleweight: Robert Whittaker has looked like his old championship self in recent bouts, which puts him in good position for his Feb. 12 title shot. But, boy, did Israel Adesanya ever handle him when they met in 2019 and “The Last Stylebender” walked away with the belt. Adesanya came up empty in his bid to be a two-division champ this year, but I think he’ll remain the man at 185 pounds through 2022.

Welterweight: Can anyone give men’s pound-for-pound No. 1 Kamaru Usman a fight? The hype train might carry Khamzat Chimaev in his direction sometime in the next year, and that would be interesting because no one truly knows where Chimaev’s ceiling is. But here’s one thing we do know: He has not faced anyone who’s anywhere close to Usman’s level. So I’ll ride with the champ until proved wrong.

Lightweight: Charles Oliveira faces a ferocious challenge when he defends his belt against Justin Gaethje in an as-yet-unscheduled title fight, and if the champ survives that buzzsaw, his reward might be a date with takedown machine Islam Makhachev. So I suppose that me predicting the Brazilian will end 2022 still in possession of the belt is a venture way, way out on a shaky limb.

Men’s featherweight: It’s possible Max Holloway could be granted a third fight with Volkanovski and this time get his arm raised, as many believe should have happened at the end of last year’s rematch. But the champ’s masterful and resilient win over Brian Ortega in September made me a huge Volkanovski believer. So I don’t envision Volk surrendering his title anytime soon.

Women’s featherweight: It was unthinkable just weeks ago that any bantamweight would be capable of ending Nunes’ reign in that division. But here at 145 pounds? It’s not simply that there’s no one the likes of Peña in this weight class. There aren’t even enough warm bodies to fill a top-10 ranking. Unless free agent Kayla Harrison signs with the UFC with the intention of making her teammate a double ex-champ, the options for this division can safely be narrowed down to two: Nunes spends another year as queen of the featherweights, or the division goes away altogether.

Women’s flyweight: I might be shoving my chips all in on a long shot by predicting that Shevchenko ends the year as bantamweight champion, but picking her to remain in charge of the 125-pounders is such a chalk bet that that there’s a cloud of limestone dust swirling around the Octagon right now. Nunes falling at 135 pounds was a shocker, but Shevchenko losing at 125 is unimaginable.

Strawweight: Namajunas is one of five women who have held the 115-pound championship. Two of her predecessors as champ — Zhang Weili and Joanna Jedrzejczyk — “Thug Rose” has beaten twice each. She also has a win over ex-champ Jessica Andrade. The only one she has not defeated? Carla Esparza, who back in December 2014 beat Namajunas to become the UFC’s inaugural strawweight titlist. Now Esparza is next in line to challenge Namajunas. Will the division’s hierarchy come full circle? I say no. To my eyes, Namajunas has evolved more than Esparza has in the last seven years, so I expect the belt to stay put.