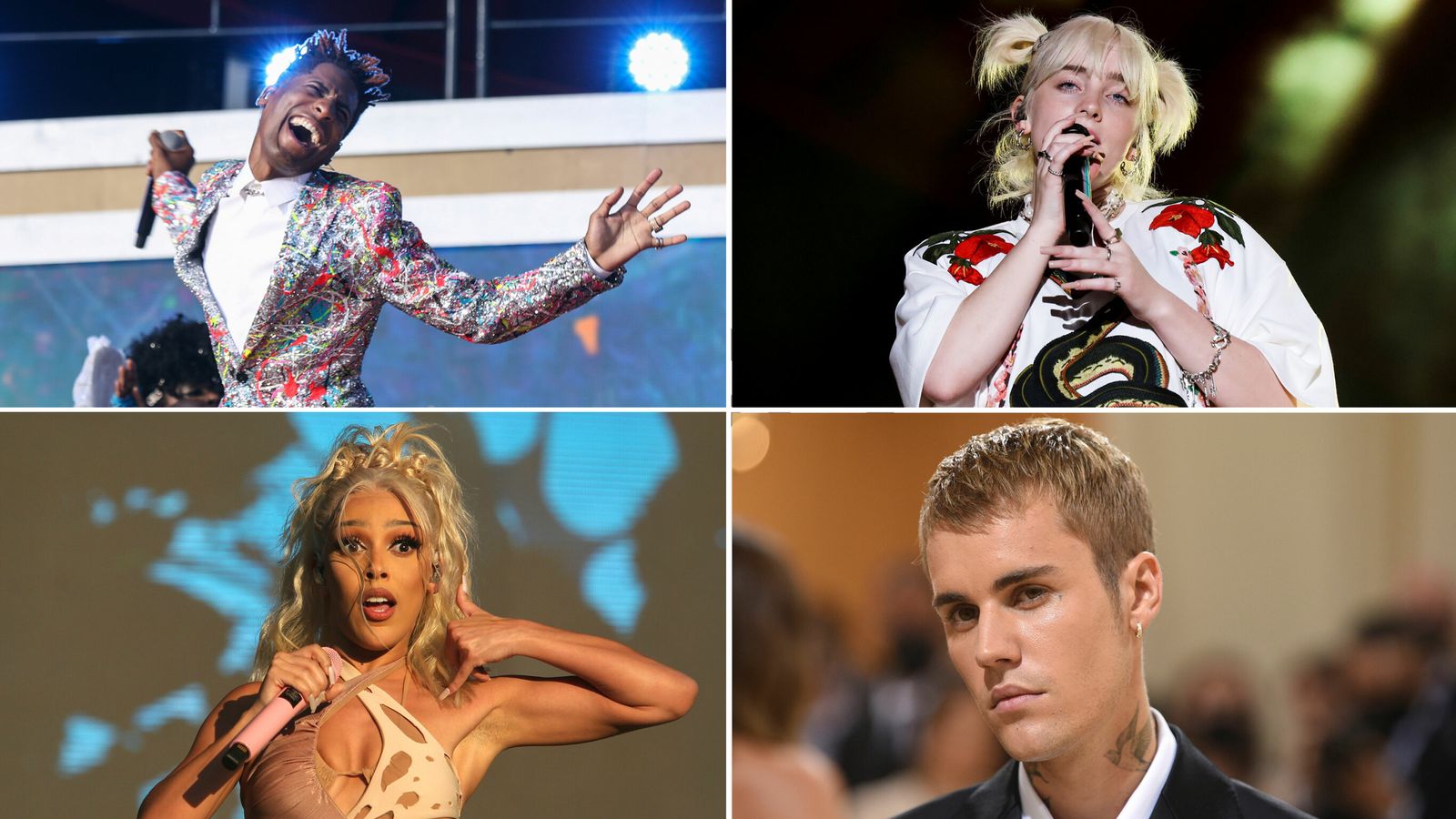 After winning an Oscar earlier this year, Jon Batiste now leads the nominations for the 2022 Grammy Awards – with Justin Bieber, Billie Eilish, Olivia Rodrigo, H.E.R and Doja Cat also in the running for several prizes.

Batiste’s nominations span several genres, including R&B, jazz, American roots music, classical and music video-film, and he is up for 11 in total – including the big prizes of album of the year for We Are and record of the year for Freedom.

Bieber, Doja Cat and H.E.R follow with eight nods, while Eilish and Rodrigo have seven each.

Other big stars to be nominated included Lady Gaga, Taylor Swift, Ariana Grande, Kanye West and Lil Nas X – as well as The Weeknd, who previously called the Grammys “corrupt” after missing out on the shortlist for the 2021 ceremony, despite huge success the previous year.

Mercury Prize and Brit Awards winner Arlo Parks continues her stellar year, flying the flag for the UK with nominations for best new artist and best alternative album for her debut, Collapsed In Sunbeams.

After making their return earlier in 2021 with their first new music in almost 40 years, Swedish icons ABBA also received a nod, for record of the year with comeback single I Still Have Faith In You.

For the top prize of album of the year, Batiste – who won the Oscar for best original score for the Disney and Pixar film Soul – faces competition from Bieber, Eilish, Doja Cat, H.E.R, West, Tony Bennett and Lady Gaga, Rodrigo and Swift.

The star, who was among the presenters announcing the nominees, tweeted a simple “11 !!!!!!!!!!!!” after the full list had been revealed.

“Oh my goodness! I’m still in a state of astonishment and shock,” he said moments after learning of the nominations.

“I’m just really happy that we were able to make something in complete artistic integrity and have it be recognised.”

In the record of the year category, this year’s nominees range from ages 18 to 95, with nonagenarian – and 18-time winner – Tony Bennett nominated alongside Lady Gaga for their version of I Get A Kick Out Of You, and Olivia Rodrigo, 18, in the running for her hit Drivers License.

Nominees for all the awards were chosen from nearly 22,000 eligible entries for music released between September 2020 and 2021.

Harvey Mason Jr, chief executive of the Recording Academy, which runs the awards, said: “This is an exciting day for music.

“These nominations beautifully reflect today’s broad and diverse musical landscape. I congratulate all of the nominees and everyone who submitted work. I’m also so proud of our voters. They voted in record numbers and brought their very best to evaluating the work of their peers, and I thank them on behalf of the entire music community.”

This year’s nominations come following the introduction of a new voting system, which allows the academy’s more than 11,000 members to vote for up to 10 categories in three genres; all voters can vote for the top four awards.

It replaces the anonymous nominations review committee – a group that determined the contenders for key awards.

Some had claimed committee members favoured projects based on personal relationships and promoted projects they favoured and worked on.

The Grammys, the biggest ceremony in the music industry calendar, will be awarded at a ceremony in Los Angeles on Sunday evening.

With 86 categories in total, there are a lot of awards to dish out. Here are the nominations in the some of the main categories.

Record Of The Year

Song Of The Year

Album Of The Year